We are now installed at Kinloch Lodge, at the end of the road north of Queenstown, ready for a 9.30am lift tomorrow morning to start the Routeburn track, making it into a circular walk by returning via the Caples track.
Today has been another hot day, although there were a few drops first thing as we ate our breakfast outside! Much as we both would have liked to climb Ben Lomond (around 1700m) behind Queenstown, there wasn't time due to scheduled afternoon activities. So, we walked up to a small summit using the Millenium walkway. Once through the dark pine woods, we emerged to views across Lake Wakatipu, over to the gondola with Ben Lomond behind, and to mountains surrounding us. ...And only three other people all morning (high season?)! 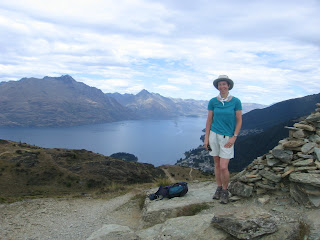 A full afternoon has been had on a rafting trip on the Shotover river, which started with a scary bus ride over the Skipper's canyon road. Single track, this dirt road has precipitous drops below which is a downhill mountain bike track. Having survived this, the rafting was a pleasure. We were one of nine rafts on the 2-hour, 14km section. The river was clear and blue, at the bottom of a steep-sided canyon most of the way. The first half involved practicing the techniques that would be required, then the second half saw us on grade 3-4 rapids with names such as 'the squeeze', 'the toilet', etc. In places there was only just space to get a raft through the rocks on either side and we got wet several times. At the end was a 170m tunnel, with a rapid that caused one of the other rafts a problem, when it got stuck!
Since then, we've eaten great fish and chips at PJ's, and driven north for over an hour, with more glaciers coming into view.
Looking forward to using the hot tub here when we finish - so, no more from us until monday evening!
Posted by Nallo Lady at 08:18

Hope you have a great time on the Routeburn, and that the good weather continues (take lots of photos! -- it rained solidly for 3 days when I was there -- but that did make the Earland Falls more fun, especially when ignoring the "emergency" bridge!). Great idea combining it with the Caples -- wish I'd done that.

Thanks Paul, we did have a great walk on the Great Walk, and Caples was excellent...

I have to ask - why is one of the rapids called the 'toilet'? - or is it an obvious reason (e.g. along the same lines as being so scary you needed to wear brown trousers)

Night bird - 'The Toilet' presumably describes the way the water goes down the rapid! We didn't mention that there was also one called 'Oh S**t'!
By the way, I've now got a new fleece too. Sorry!