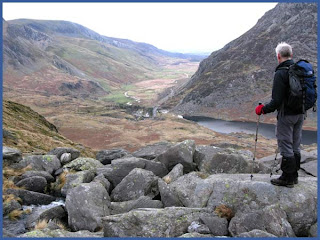 Happy New Year, Everyone
A bright start to the New Year saw us on very quiet roads leading to Llyn Ogwen in Snowdonia, reached easily in two hours. 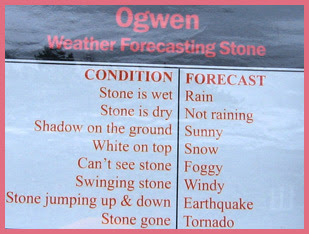 The forecast, once again, was for the weather to clear from the south by early afternoon. So despite the cloud hanging low and grey over the mountains, we were encouraged by this forecast, and the lack of precipitation or significant wind. It was a warm 9°C. So our planned walk was on, despite our inability to find the Ogwen Weather Forecasting Stone. We lingered at the drinks kiosk with tea for a while. It was eerily quiet, with no sign of ‘The Blogfather’, who we thought we might encounter here.
Setting off up the gully towards Y Garn, we were soon on the green hillside with views back to Llyn Ogwen. Llyn Idwal appeared on our left below slabs above which grey clouds hung ominously. We warmed up nicely as the ridge became steeper. My fleece was soon discarded. Reaching the summit in the mist after an hour and ten minutes, we saw three people ahead disappearing into the mist.
It was cloudy, but fairly calm. We descended to Llyn y Cwr, where, still in cloud, we enjoyed elevenses with some delicious pecan and hazelnut fudge, and our last two home-made chocolate biscuits.
Another climb followed, to the summit of Glyder Fawr. Steep initially, it soon eased off, but the cloud thickened and visibility dropped. Cairns guided us onwards from that summit, but they stopped (ie we lost them) after a while and we started to descend. So we climbed back to the ridge over large, wet, slippery boulders, eventually pawing our way to the awkwardly slithery summit of Glyder Fach. This was very slow going, the DP being fearful of the inconvenience of a broken leg or ankle.
Back on easy ground we passed the Cantilever Stone and dropped to the end of the ridge beyond the Bristly Ridge junction. As we stumbled down, slightly off the ‘path’, a bouncy black Labrador tried to round us up. He soon shot off, followed by his master who appeared out of the mist.
On dropping north off the ridge, a view appeared below us. The cloud was finally rising, if later than forecast. The hills were clear once we reached the col below Tryfan, and we strolled back down to Ogwen on good paths with expansive views.
Having seen only about a dozen people up to this point, the path below Llyn Bochlwyd was well populated by families out for afternoon strolls and various folk converging on their return from various mountain routes. 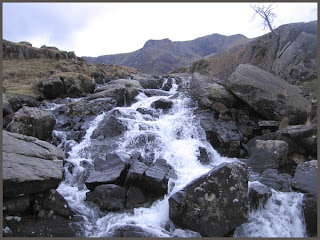 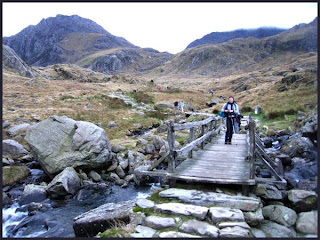 By the time we got back to the car around 4pm, the light was fading. It had been an excellent start to the year, despite a bit of mist, with easier conditions than our previous two outings during this holiday period.
Here is a map and some stats. This is a highly recommended winter (or summer) walk, for those with suitable gear and navigation skills. 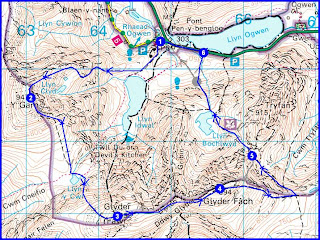