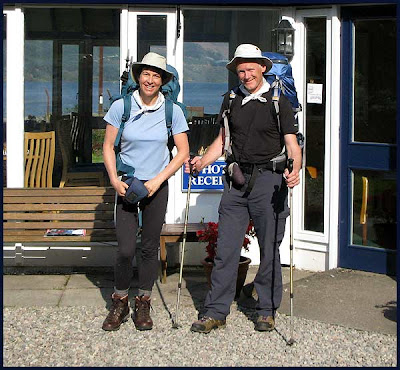 There are 66 people starting from Shiel Bridge. This made it a busy place last night, so I can't mention everyone. It was good to chat to John (former 'Deputy Dawg') and Stef; it was nice to see Doug Bruce again, and Bernie and Pauline Marshall, and Dave Skipp (to be congratulated on imminent parenthood) was in great form - he had a long day in prospect and would be having an early night. Denis saw to it that Dave was still going strong in the pub at 11.30. Dave doesn't drink in halves.

Today we met some more Challengers, and Sue tried to entice them with her Chocolate Caramel Shortbread (CCS), a batch of which was placed next to the signing out sheets.

Anyway, back to last night. Some of us managed to escape from the alcoholic haze generated by Denis, to view a lovely, if cloudless, sunset in lovely clear evening light. The Kintail Lodge Hotel did us proud with some good food, and everyone got to bed 'happy'.

So dragging ourselves out of bed this morning may have been a problem but for a timely good luck message from Weird Darren that doubled as an alarm call. Darren dropped out in style through illness last year and is nervous. But he has a more sensible route this year, and a more reliable companion, and I'm sure he will be fine.

If Darren's call hadn't got us up, Bernie's sizzling bacon (we were staying in the Trekkers Lodge where you can self cater) would have done.

The hotel breakfast was adequate, and by 9am we were ready to leave.

Since then we have met just one Challenger, Robert Slade, a first timer who found last night's spirit of camaraderie in the bar just a little daunting.

We have spent the day in t-shirts. It was hot. An 8 km road walk, despite the pretty carpet of violets and lousewort, isn't the best way to start the Challenge, but it did get us efficiently to the point where we could stroll easily up the stalkers path to Bealach Duibh Leac, breaking the 700 metre climb with long elevenses and lunch stops. 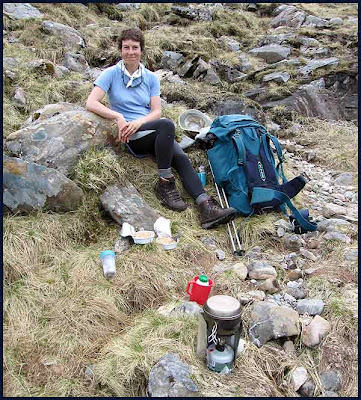 From there it was an easy stroll to our first summit - the Corbett - Sgurr a' Bhac Chaolais. On the way down we saw two other Challenger like people approaching from a strange direction around the side of the hill over very rough ground. We left them to it and they didn't follow us along the ridge, preferring to descend into Glen Quoich.

By now it had clouded over, with spots of rain, but the weather held for long enough to allow us over our first Munro summit of the South Cluanie Ridge, including a bit of easy scrambling. 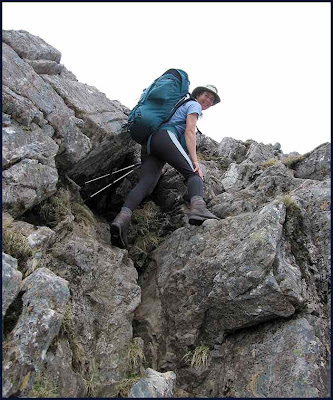 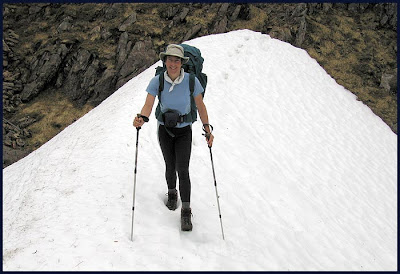 Ten minutes later we were down at 755 metres, setting up camp on a sward of flat grass beside a babbling brook exactly where we had planned to be. 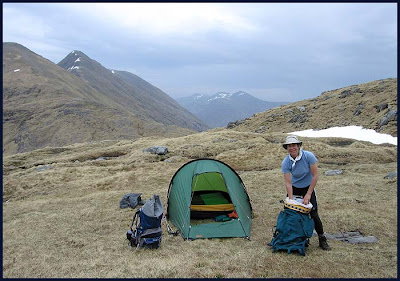 We were fully installed by 5 o clock, so tonight we have plenty of time to cook, read and write. Hence the verbosity of this entry! They may be shorter in future. 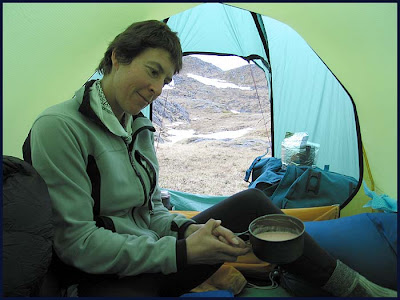 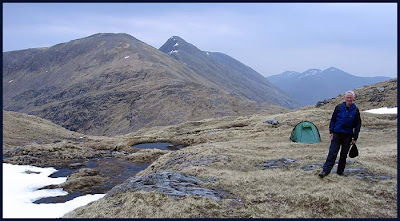 Blogger sets off, looking for a signal before dusk

As far as I can see, this is the first blog-post from the trail this year. Good one.

Thanks Duncan - it involved quite a hike to get a signal!