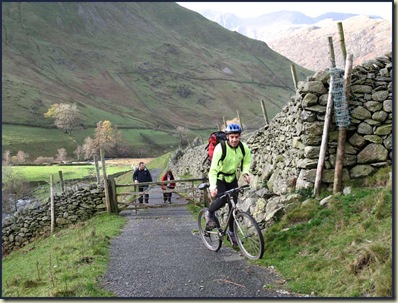 But it's getting steep, we need a rest... 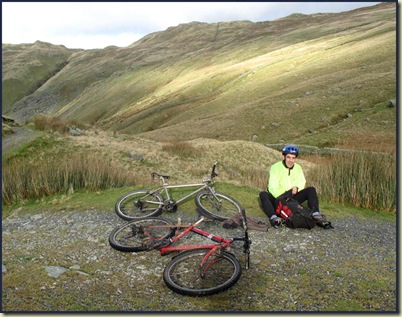 Better push, it's too steep to cycle... 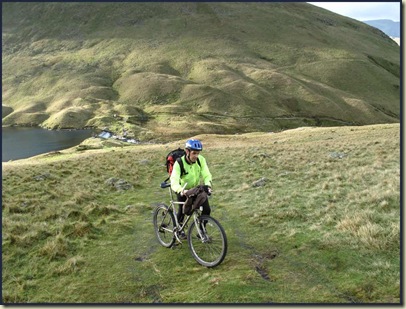 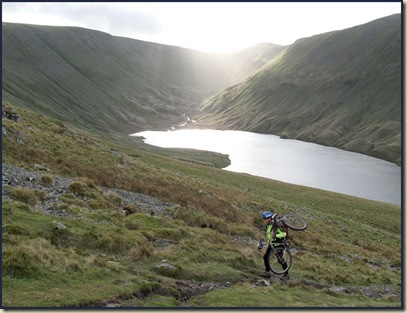 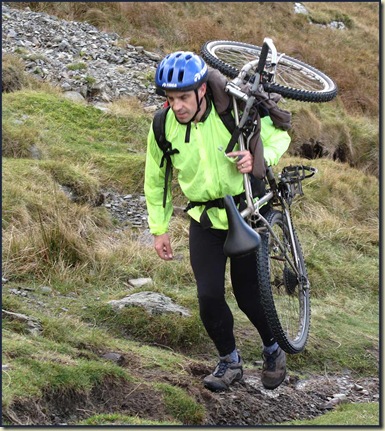 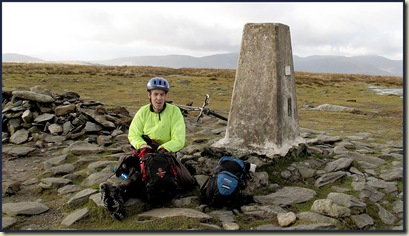 And you're not the only 'Pusher' around here, Al... 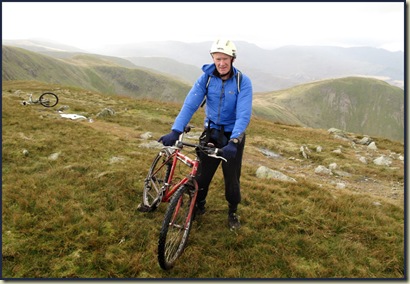 The view across Ullswater is magnificent... 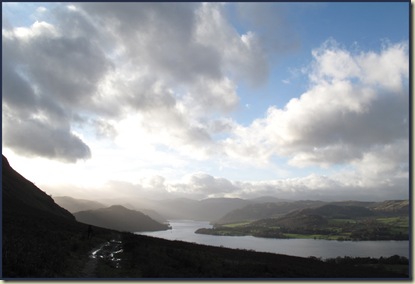 And so it was - Alastair and I enjoyed a fine excursion in the Lake District today.  To describe it as a 'ride' is a little optimistic.  You'll realise why from the statistics as well as the photos:

So we could have walked it faster!  But it wouldn't have been such fun.  We covered miles of sodden ground with the tyres hidden from view as they sloughed through the marshes.

We were running late as my rear tyre, perhaps in sympathy with what was to come, exploded on the journey north.  Otherwise the ancient steed performed impeccably, though the brakes did develop a juggernaut's horn impression in the latter stages, frightening walkers beside Ullswater.

Alastair's bike, nearly as old as mine, had a few brake problems of its own - of the malfunction variety; and bits of his bike seemed to come loose from time to time, as did his trousers, which disintegrated during the course of the day.  On the occasions when he was able to mount the bike, it seemed to object to his presence, as from time to time (Al was usually ahead) I came across man and machine spreadeagled across the path as if performing some bizarre ritual.

I have to admit that I was 'chucked off' a few times, as well.

This was a demanding ride.  Even the narrow rocky bridleway along the south side of Ullswater undulated viciously and required great care.

The route, shown below, took us from Hartsop (1) to The Knott (2) and on to Racecourse Hill (High Street - 4).  From there we retraced and headed for 6 miles along the Roman road that we discovered has very poor foundations.  Over High Raise to Red Crag (5), and on to Loadpot Hill (6), with stunning views across the District.  Then down to The Cockpit (7), from where a sharp turn leads down to Howtown (8).  Then a rising traverse around The Coombs took us to a road at Martindale Hause.  We sped down there to Sandwick (9) for the (Tedious?!) bridleway to Patterdale (10) from where we rushed back up to Hartsop (1) on the speedy tarmac to reach the car just as darkness fell.  Just as well; neither of us had any lights. 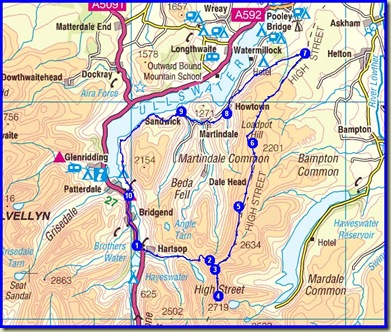 We like going off road, but I have to say, regaining the tarmac at Patterdale was quite a relief!

Given the softness of much of the terrain on this route, and the amount of time we spent walking, I think next time I'll leave the bike at home and leave boot prints rather than ugly tyre grooves.  However, I've wanted to cycle along High Street's Roman road for many years, so today that ambition was achieved - it's very satisfying.