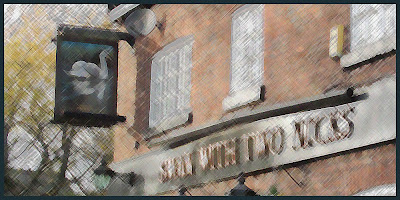 Last night we enjoyed the first of our evening walks of the year, an 11 km stroll from home, down the Bridgewater Canal towpath to The Swan with Two Nicks, through Dunham Park and the golf course, and back home via the Metro from Altrincham Station.

We didn't take a camera (it was dark), but this was a repeat of an oft frequented stroll, last walked on 7 November last year. Tonight the trees were leafless but there was lots of ambient light, so no need at all for any torches. The towpath was deserted apart from one dog and its surprised owner.
The Swan was quiet, with just a crisp tasting session going on in the background as, over pints of Timothy Taylor's 'Landlords' and a glass of cider for Sue, we showed Andrew [the 'Images from Ottawa' show was rejected on the grounds of being boring!] our plans for the walk to the east of the Maritime Alps in July that comprise the third chapter of The Famous Five's biennial expeditions. Around 62 km in six days, with just over 5,000 metres of ascent, subject to 'vetting'. More on this in a separate posting.
I wore my original Asolo Fugitive boots tonight. They are fairly 'bald' and a bit leaky, but remain supremely comfy, so much so that the my two pairs of new boots have as yet enjoyed very little use. Tonight these 'originals' passed the 1000 mile mark that any pair of half decent boots should easily muster.
Next Wednesday we won't be walking in the evening, but we will be with Stockport Walking Group at Hazel Grove Civic Centre with our 'Walks and Via Ferrata in the Dolomites' hour long presentation, starting at 8 pm, adjourning to the Grapes afterwards. We hope that some of you may join us there.
We use an old calendar from 2007 to record birthdays (it can prove confusing). This month we have the pleasure of looking at the image below, taken on 1 February 2006 on trail 36 by Lac Meech in Gatineau Park, with Helen returning down the trail after passing the boathouse. 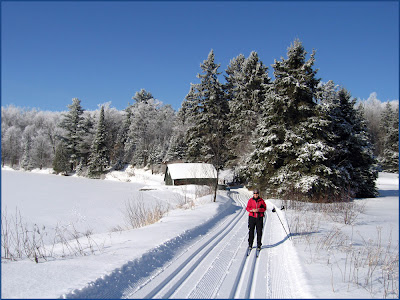