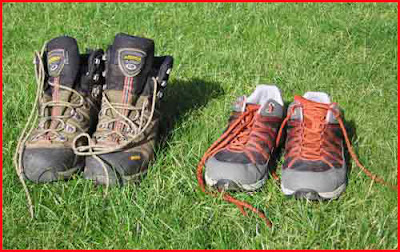 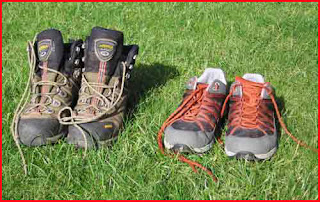 Back in June, after the TGO Challenge had finally finished off my old Karrimor KSB3 boots, and the soles of my even older and comfier Trezetas had parted company from the uppers in the Dolomites, I was forced into going shopping for replacement boots, and also for ‘trail shoes’, given that my newish Salomon shoes had disintegrated.
I went into Manchester and toured the usual shops – Cotswold, Blacks, Brighams, Milletts…. In each one I strolled up to the poorly stocked boot section, browsed and left after a couple of minutes. Nobody in any of those shops perceived me to be a potential customer. So I got in the car and went to Hathersage, arriving at Outside at lunch time. As I strolled into the boot section I was asked whether I would like any help. What a break through! Would the trip be worthwhile? Of course! After much careful measuring, and serious apologies for the fact that of the four different boots they insisted on me trying on, one was not in stock in my size, the Asolo Fugitives felt ideal. And on to the trail shoes….the same story, and Innov8 Roclites were added to my ‘basket’. All this took at least an hour, and given the standard of attention and service I decided not to ask for a discount. These purchases were important, especially the Fugitives which were to be taken immediately to the Dolomites and then on to the Berlinerweg (Mayrhofen). They performed so well on those trips that a thank you card was sent to Outside. Perfect for the job, especially for the steep scree slopes of the Dolomites, where I find ankle support is helpful. They have certainly performed well over their first demanding 400 km of use. And the Roclites. They were half a size smaller and are deliberately on the ‘snug’ side and have rubbed my heel. In fact their first longish walk was earlier this week on the 31 km ‘Altrincham Circular’. Albeit I had protected my heels, they were extremely comfy. The only time I noticed them was on marshy ground, where the water ingress was as if I was wearing sandals. But they dried out very quickly, a huge contrast to the KSBs, whose uppers had turned to the consistency of blotting paper on the TGO Challenge.
So if you need new walking boots or shoes, and live within range of Hathersage, here’s my recommendation: ignore the ‘boot guides’ in the well meaning mags and visit the experts at Outside. They will find something of acceptable quality to suit the shape of your feet.
Good luck!
Postscript - 18 January 2008
The Asolo Fugitive boots remain supremely comfy after 600 km of use, but once they were subjected to very wet conditions (after about 500 km) they started to seep water. They only leak in very wet conditions, but we've had a lot of those recently. The soles are also showing signs of wear. So it's Sealskinz socks to the rescue. These keep my feet beautifully dry, despite any boot leakage.
Postscript - 14 March 2011Believe it or not, the Asolo Fugitives have now done nearly 2250 km, and despite being pretty battered they've outlasted their replacements.  They still 'seep' a little, but one of the GORE-TEX® liners remains more or less intact.
On the other hand, the Roclites proved to be less robust and lasted only 300 km.  See here for more comments.
Posted by Phreerunner at 12:06