It was a select crowd that gathered at the Snake Inn on Friday evening, to reminisce and enjoy a conservative amount of ale in front of the fire. Outside, tents were pitched on the grassy spaces around the car park and campervans vied with each other for the flattest locations.
Friday night was blustery and wet at times, but we were comfortable in the 'luxury tent' with pillows and thermarests - no backpacking this weekend.
Saturday morning dawned dry, but windy and gradually the car park filled with people anticipating a walk. Richard had organised two buses to transport around 30 of us to Edale and the journey passed quickly with challenge banter on board. 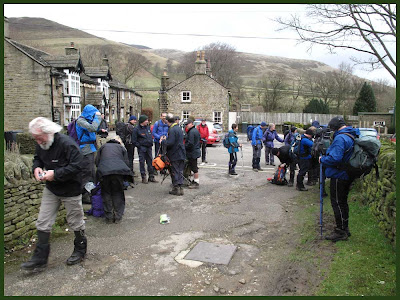 The group milled, with no-one wanting to act as 'leader', so it was a few minutes before the first bravely forged ahead on the nicely paved Pennine Way, followed by a steady crocodile of people. The wind blew strongly, making conversation tricky. 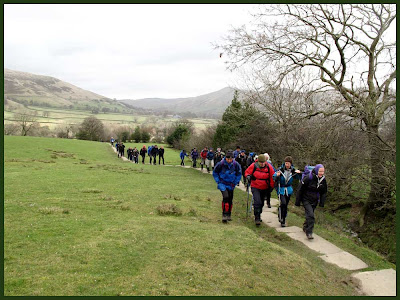 Jacob's ladder strung us out and warmed us up, opening up views behind. 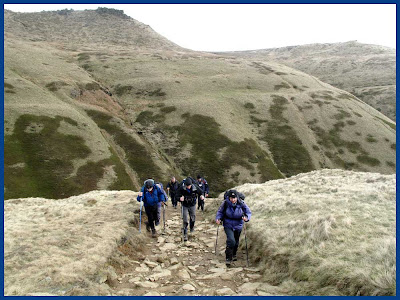 With most of the height gained onto the Kinder plateau, it was time for a break, on the lee side of a large rock outcrop. Boxes of caramel shortbread were distributed, with few refusals! 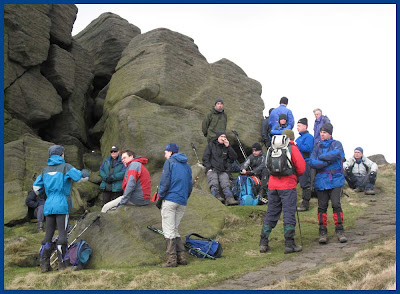 The route then continued north around the edge, passing the trig point on Kinder Low, with views opening out to Kinder reservoir above Hayfield. The blustery wind played with my limbs, giving me the appearance of a drunk staggering along the path. Kinder Downfall provided a distraction because the water was failing to make it downwards, but being blown back up in clouds. Quite a sight! 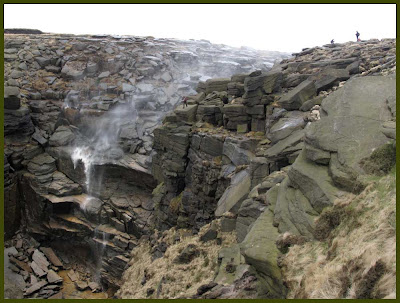 The only rain of the day was here! A quick dash across the river bed was required to avoid a soaking. More rock outcrops provided a shelter for lunch, where an impromptu competition was held - who had the oldest Dark Peak map? The prices gave the game away because whilst one had cost £2.95, the clear winner was the £1.10 version! While some grumbled that
they had not had time to have pudding, there appeared sufficient time for Alan to have a post-lunch nap.... 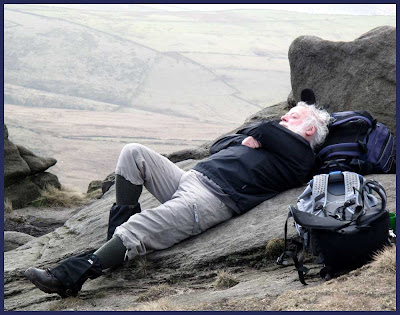 At the path junction with Ashop Clough, a few more hardy souls continued to Mill Hill and followed the paved path over the top to the Snake Road, continuing down Doctor's gate culvert and along the river in the woods. Others descended down Ashop Clough, on a slightly more direct route.
Tea was in order at the Snake Inn and relaxation before dinner. Richard had succeeded in bringing together 48 challengers and the Inn provided a good meal over which much conversation flowed.
Posted by Nallo Lady at 15:45

Kinder Downfall looks great Martin. Looked like a good weekend was had by all.