Surprisingly, we slept quite well, despite the howling storm that battered the tent. It got quite cool. My watch stopped. The TGO Challenge became a timeless activity. The wind changed. My side of the tent got battered. The storm continued, quieter now. Sliding noises down the tent fabric gave the game away. Snow. We congratulated ourselves on being well prepared: 2 en-suite toilets for this trip - it was nasty outside. 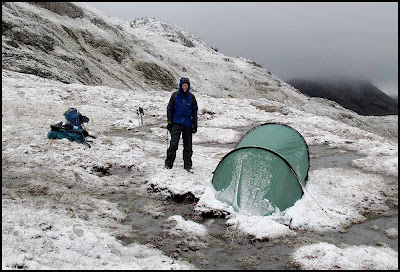 Yesterday's improving weather, and the forecast of a high pressure system taking over, conspired to provide a false sense of security. The traverse to Meall Buidhe didn't make sense, so for the first time (ever) we chose our FWA (foul weather alternative) for today. This meant we could enjoy a lie-in as the estimated time for our FWA was only 5 hours 36 minutes. (You can see from above that it took longer, but no matter - we finished soon after 4 pm anyway.)

We braved the snow and got away by 9 am. How glad was I that I'd purchased new gloves! The Sealskinz were brilliant and cold hands were avoided. There was lots of wet snow to negotiate whilst striking camp.

The descent from our Winter Wonderland to the River Carnach was slow. Slithery wet snow to 550 metres, then steep boggy slopes with occasional rock slides to negotiate. 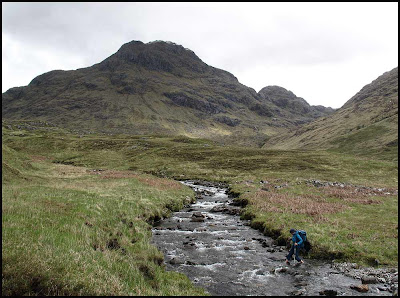 Once on the 'track' by the river, the bogginess remained, but deeper. We basically sloshed the 5 km to Carnoch, stopping en route for a long brew by a river that needed long stretches for me and Crocs for Sue in order to keep our feet dry. Milkwort and lousewort, together with dame's violet, dog violet, lesser celandine and bluebells were thriving in the wetness. Frogs jumped to avoid the clump of our boots, and a cuckoo called nearby. 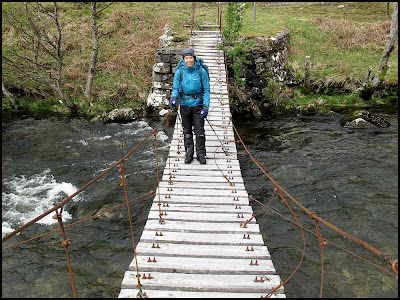 Beyond the rickety bridge ('for Wilsey and Margaret - 19 January 1980') at Carnoch we spotted Robert, about 5 minutes behind us. So when we reached Sourlies bothy a bit later we brewed enough for him as well. We hope he appreciated it - he told us of his difficult day yesterday. He had successfully climbed Ladhar Bheinn and got to Mam Barrisdale after 8 pm, by when he had decided that pitching his Akto (tent) in the gale wasn't feasible, so he spent the night in his bivvi bag, with cold wet feet in the howling gale and sleety storms. Not an experience he wishes to repeat!

Mam Barrisdale, albeit over 200 metres lower than our own camping spot, was the windiest place we visited yesterday.

We enjoyed a happy hour at Sourlies, with sunshine and showers, and a visit from three 'Likely Lads' from Arbroath - Donald, Andrew and David - first time Challengers but very experienced Hill Men. They had arrived at Inverie last night and set off walking at 6.30 this morning. 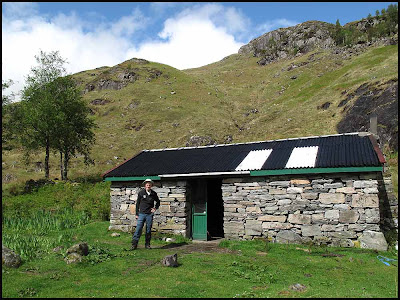 Sunshine and showers continued as we strolled 5 km up the path to this idyllic spot at about 290 metres beside a bubbling brook. It was slow going, being a bit boggy (God built the fine mountains of Knoydart on a foundation of bog - a rather dubious experiment), and we both donned Crocs to cross the river whilst Robert sloshed across, shook his feet like a dog drying itself, and continued on - 'never to be seen again'. 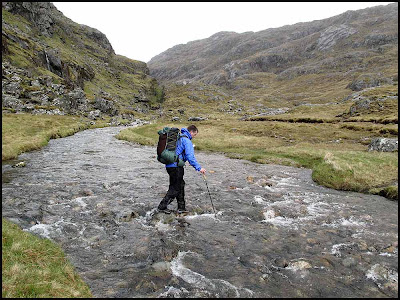 We then caught our 5th and final Challenger of the day, big Bill Grigg, on his 4th Challenge but still suffering the effects of yesterday's long lunch at the Old Forge. We hope he is ok, he was going very slowly but had the satisfaction of immediately re-passing us as we set up camp. 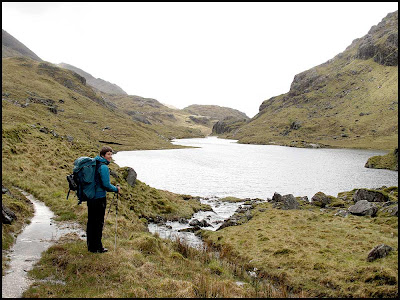 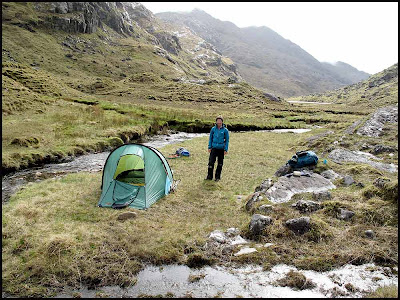 As Sue prepares another fine meal, it continues to be showery and cool. That means sleet and gales at our proposed fine weather camp at 900 metres, so we made the correct decision today. The day may not seem to be 'according to plan' but it is actually precisely according to our 'FWA' plan. Sometimes it's best to avoid the summits, and today was one of those times.

Sadly though, it means we have had no phone signal all day, so the postings will probably all appear at once due to 'circumstances outside our control'.

Remarkably, despite the constancy of the bog, we both kept our feet dry today. Nobody we met, including a number of folk doing the Cape Wrath Trail, seemed to have managed that!

Next Posting
Back to Index

Yes, I well remember negotiating "occasional rockslides" on this slope (well, a little further up the valley, beneath Mam Unndalain). Getting to within 100 vertical feet of the river Carnach and then having to reascend double that to try another route down to the river did not go down very well in the Paul camp at the time. Then I was benighted (for the first and hopefully the last time) before I could get within striking distance of Sourlies. Same time of year, but no snow! Looking forward to your next installment!