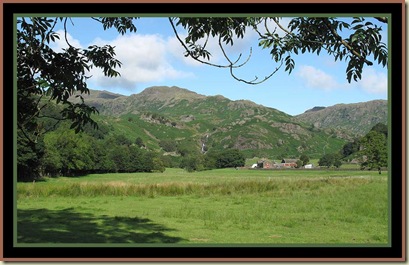 It was an easy drive to Grasmere.  I knew it would be a good day when the sharp outline of the Lake District hills appeared under a clear blue sky through the car windscreen on the M61 before Preston, when they were still some 40 miles distant.

By 8.45 I was setting off up Easedale, and soon reached the point where the above picture was taken.  The waterfall down which Sour Milk Gill flows is right in the centre.

It being the Lake District on a sunny morning, there were a few people enjoying the early sunshine.  Mainly those in self catering accommodation, as B&Bs and hotels don’t tend to release their guests until later!

The distinctive 4 petaled tormentil was abundant; it seems to be ubiquitous in the UK’s wild places at this time of year. 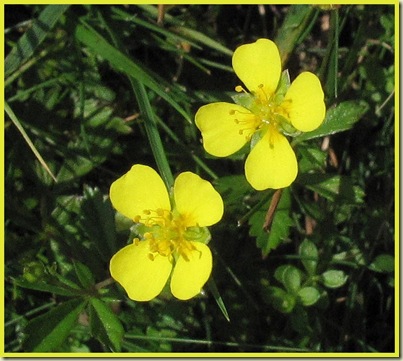 In days gone by the path up Easedale was a rough, boggy affair.  Today a generation of path builders has ensured an easy ascent for tourists on this and many other paths in the Lake District and elsewhere.  The path is a delight to stroll along. 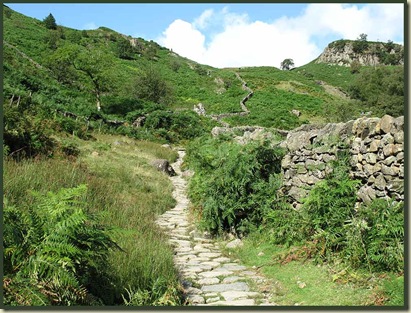 It was hot, and the pores opened as I toiled up to the waterfall, the scenic delight of which provided an excellent excuse for a short break.

I counted a fair number of backpackers heading down towards the fleshpots of Grasmere, having no doubt spent a glorious night out in the upper meadows of Easedale. 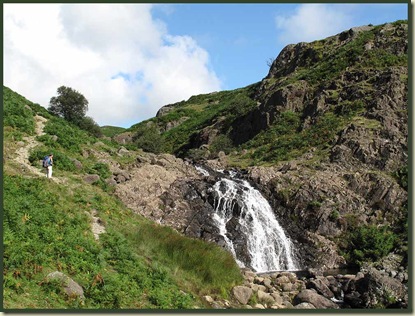 My own route continued past the tarn and up on to Blea Rigg, from where the length of Windermere could be made out under the bright sun to the south east.  Far below to the south west was Stickle Tarn, with the orange triangle of a wild camper by its shore, and Lingmoor Fell lurking in the heat haze beyond the deep groove of the Langdale valley. 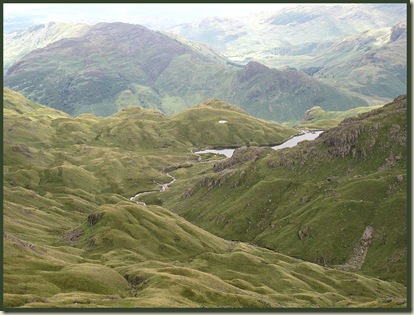 After strolling up Blea Rigg up to Sergeant Man, it was an easy plod across to High Raise, at 762 metres my high point for the day.  The trig point proved to be a good place to take this self-timed photo, in which the familiar bulk of Great Gable can be seen behind my head. 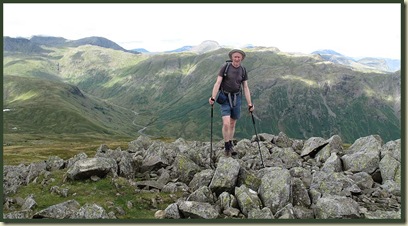 I pottered about, at one point spotting a rucksack abandoned in a peat bog whilst its owner bagged the summit of Pike of Stickle.  It would have been amusing to see his expression had I managed to swap it with my day sack, but the old hobo was too quick for me and bimbled into this view north from Thunacar Knott, with the summit of High Raise just off to the right, and Skiddaw in the far distance on this lovely clear day. 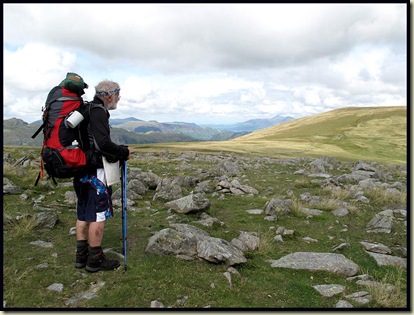 He produced a wonderful mug of tea down by Belles Knott, which he assured me was an excellent Grade 1 Scramble. 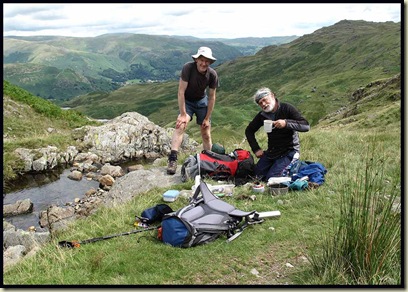 As we continued down towards Easedale Tarn, this character demonstrated his scrambling expertise by bum-sliding portions of the rocky ‘path’. 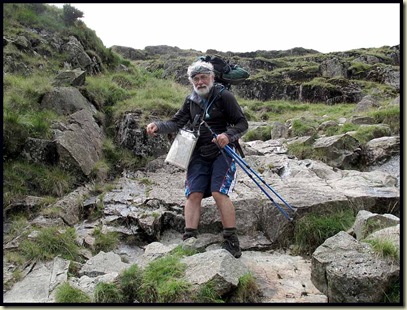 “It’s this way” he pronounced, on reaching the tarn. 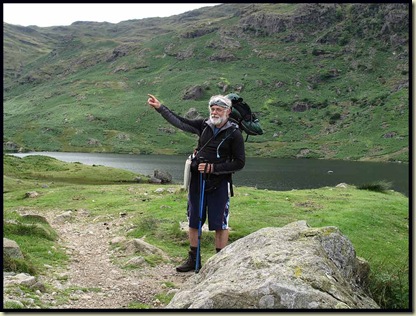 “No, this way” he prevaricated. 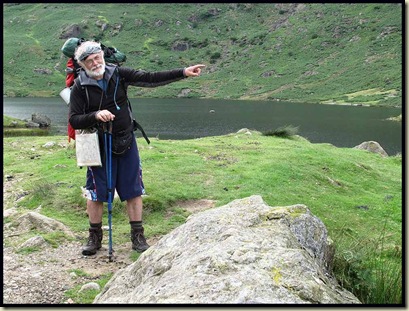 “Dunno, I’m lost” he confessed, having dropped off the edge of his map. 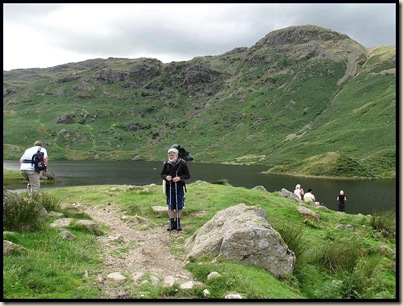 Anyway, there were plenty of people around, we could ask them for directions….

“Is it safe to go down there?” asked a couple, pointing down towards Upper Easedale.

Luckily I had a couple of maps and was actually retracing my route of ascent, and the Jolly Pie Man really knew his location, even without a map, so we were soon safely down in the valley, where we turned to admire the splendid view back to Helm Crag and Seat Sandal.

The shopkeeper of Grasmere, Mr Coop, provided my companion with fresh provisions to supplement his Mars mountain - he still has four days of tramping to reach Bowness-on-Solway by Monday afternoon in time for a pre-ordered bath.

I guarded his valuable equipment whilst he plundered the shelves, emerging with his essential provisions - an orange, some AA batteries and a bottle of Mr Coop’s special blend of ‘fine Scotch whisky’.

We then settled down with ample supplies of Hawkshead Best Bitter, and that rehydration fluid worked its magic, for a few minutes. 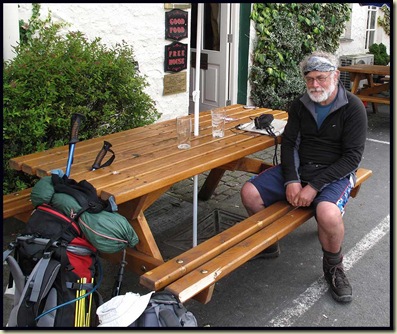 Blimey! The Pieman looks like he hasn't been on many pies! He's wasting away! Buy him more beer immediately! Fatten him up.

In that picture of lunch I thought there were two hobos on the walk.

I recall from his blog as he is now known the old hobo was going all light and fast with his pack, and kit? He looks like he has steeped out of the 70s with all that kit strapped to his pack. What happened? Grasmere does make a great stop over - beer, pies, and bacon sandwiches. Hard to get going back up the hills after a stop there.

Just testing that I can use my new computer which Rob brought me today.
Love Mum

What a smile you've brought to my face with those pics of the hobo! Great stuff. And the lovely wee tormentil too! Usuallly overlooked :)

Light and fast? Get it over with as quickly as possible eh?

Anyway, who'll lend me fifty quid for a cup of tea.

Alan - he bought a bottle of Scotch. He'll be fine!
Martin - I don't think he went up any more (proper) hills!
Mum - the test worked; I hope by the time you read this that you are feeling better and enjoying your new toy.
PW - my pleasure!
Mike - great to meet up for the day. I think 'GSOH' must be tattooed to your CV!

PS I drafted something like this ages ago but it seems to have 'disappeared'.

After reading all his posts on the walk he did go on to finish a proper good walk. Good route he came up with, and one I would fancy to do sometime. Grasmere would be a must.

Looks like a corking day out. Didn't recognise the 'hobo' at first and was a mite confused.
Belle Knot is indeed a lovely scramble - I thought that it was grade 2, but I'm probably wrong.....

You are correct, Mark. I should never have relied on information from an old mapless hobo!