This evening’s walk exploring some of our local industrial heritage was not accompanied by a camera, so the images are ‘some I took earlier’.

Andrew, Sue and I congregated at 7.30 pm on a fine, warm evening on the ferro-concreted Kingsway Bridge (SJ 625 880 – easy parking in nearby side streets), which in 1934 provided Warrington with its second road crossing of the River Mersey. 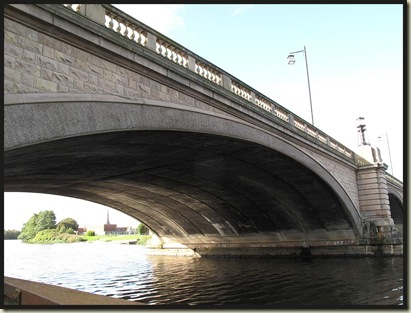 Poking out from under the arch, the soaring 281ft spire of St Elfin’s parish church dominates Warrington, though it is only just visible in the picture above.  Added to the ancient church in 1860, it’s apparently the seventh tallest church spire in England.

Our walk started from the east of the road (furthest away from Warrington), where we went down the ramp to the south (left) bank of the river, then left under the bridge, from where the illuminated spire stood out much better across the amber river, lit by the night sky over the town, than it did in the daylight below. 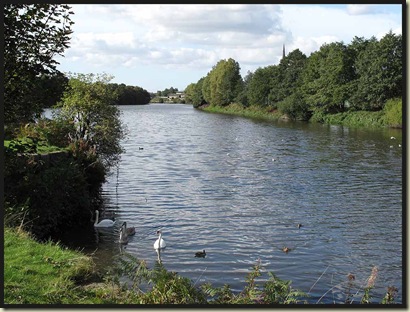 It’s nice to see swans and other bird life here in the lower reaches of the once polluted River Mersey, where there must also be lots of aquatic life, judging by the carefully gouged positions that have been created for fishermen.

Almost immediately, we headed left into Black Bear Park, and down the tarmac lane down which the once busy but now filled-in Runcorn to Latchford canal has been transformed into a wildlife haven.

Passing under Knutsford Road, signs like the one below indicated that we were in the Trans Pennine Trail area, where there’s a proliferation of these delightful waymarks in this neighbourhood.

Continuing along the well lit path, albeit night had fallen, we passed under a railway bridge and then under Loushers Lane, continuing straight on until reaching the substantial barrier that is the 36-mile long  Manchester Ship Canal, opened in 1894 to give the city of Manchester direct access to the sea, at a cost of about £15 million (£1.22 billion as of 2009).  In its day it was the largest navigation canal in the world; today it’s no longer considered to be an important shipping route, but it still carries about several million tonnes of freight each year.

Anyway, we turned left along the Trans Pennine Trail, heading beside the Ship Canal towards Manchester.  The rustling in the undergrowth was perhaps the scamperings of this little chap. 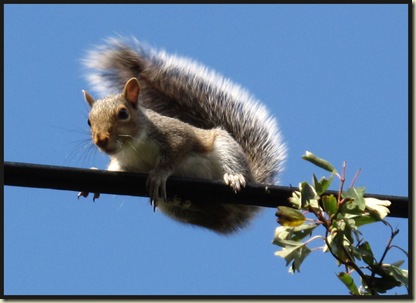 The high level Cantilever Bridge soon came into view.  To reach it we took the last cut through on the left before Warrington Town’s football ground, past Bethel Baptist Chapel which is said to have been built in 1852 but has 1860 emblazoned on its brickwork. 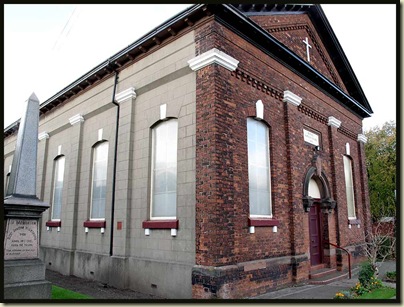 The Cantilever Bridge is easy to find from here.  ‘It’s a bit dilapidated and in need of repair’, I thought, as I passed over it a few days ago.  On the evening walk, we noticed that roadworks were in progress, with single file traffic and a closed pavement.  The bridge is at least 70 ft above the canal, allowing ships to pass underneath it. 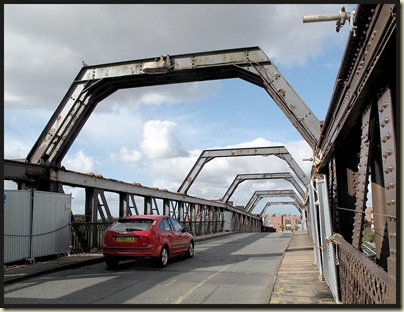 Over the bridge an immediate right turn led us down a ramp to Fairfield Road.  Crossing over the road and heading to the right and under the bridge soon brought us to a footpath to the left, where the road veered right, along which footpath we followed the Ship Canal to Greenbank Road and onwards to the swing bridge at Knutsford Road.

Crossing Knutsford Road onto Thelwall New Road we continued along the canal, under the skew railway bridge that looks in fair condition.  However, the need for heavy repairs to this bridge is said to have been a principal contributing factor to the final closure of the Warrington to Altrincham railway line in 1985, it having been closed to passenger traffic since the Beeching cuts of 1962.

Continuing on beside the canal, we soon reached Latchford Locks.  There’s a well lit footpath across the locks – somewhat necessary due to the large drops, but despite its possible dangers the route remains open at night (no doubt guarded by CCTV!).

Here’s the daytime view west along the Ship Canal to the skew bridge and beyond to the Cantilever Bridge in the distance.  There’s a similar ‘straight line’ view to the east, with the M6 motorway passing over the Thelwall Viaduct in the distance. 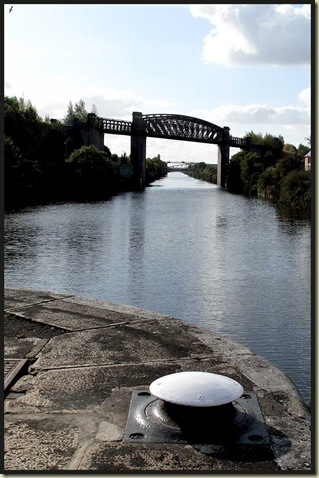 After crossing the canal, my old map indicates ‘Works’, and a guide book refers to Richmond Works, which started trading opposite the locks in 1906 and by 1947 had produced over a million gas cookers. 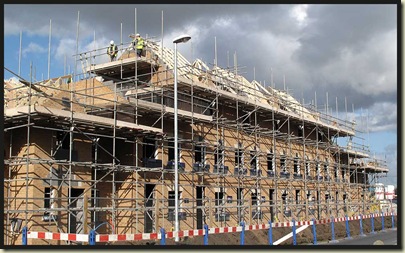 One of the new buildings, thin town houses or flats, I presume, has been finished.  It looks slightly odd, not just because of the wide angle lens, but because the building actually curves – its centre being furthest away from the camera. 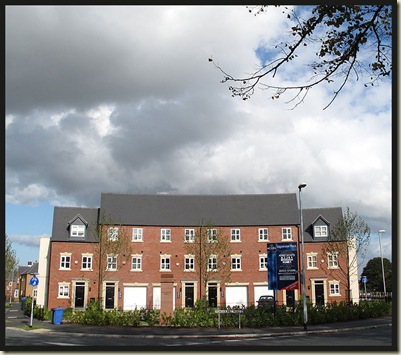 As we walked left down Thelwall Lane after crossing the locks. we passed the above houses and took the second right into Nook Lane, where the factory workers used to, and probably still do live. 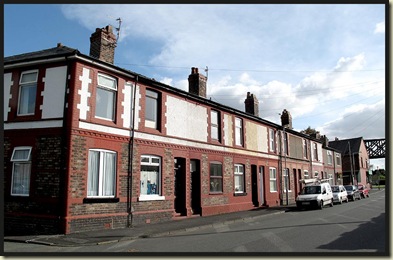 After bearing left along Marsden Avenue, some playing fields are reached.  We now forsook the tarmac in favour of a walk beside the River Mersey, the banks of which at this time of year sport swathes of Himalayan Balsam. 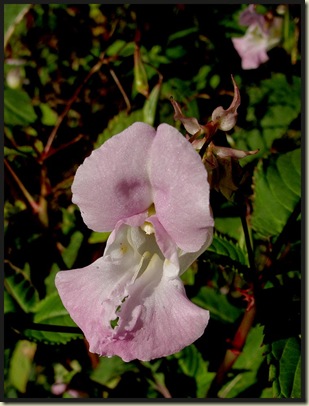 Our route headed across playing fields to the river, where sufficient ambient light made our torches obsolete on the warm evening, and a pleasant stroll over an inverted ‘V’ in the river took us happily back to Kingsway Bridge. 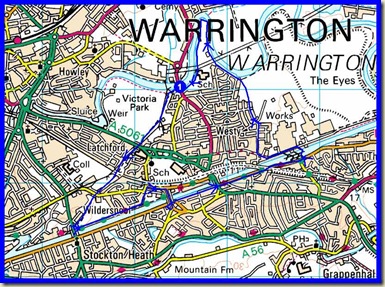 I can recommend the Mersey Ferries Ship Canal Cruise as I good way to see this part of the North West, plus a lot more. Did it last summer from Salford Quays to Pier Head, from where you are bussed back to the start point.