We have, over several years, walked most of the coast path from Minehead.  Last year’s journey from Plymouth to Torcross was recorded on these pages, the index for which entries is here.

This year’s daily reports can be viewed by clicking on the following links:

Here are a few further images and additional observations and links, to supplement the postings made during the trip.

I would reiterate that anyone planning to walk on the South West Coast Path (SWCP) would benefit from the SWCP Association's Guide Book. This is updated every year.

Sadly, having made it all the way from Minehead to Torcross on previous visits, Sue was not fit enough to come this year, my only companion on this trip being Andrew. 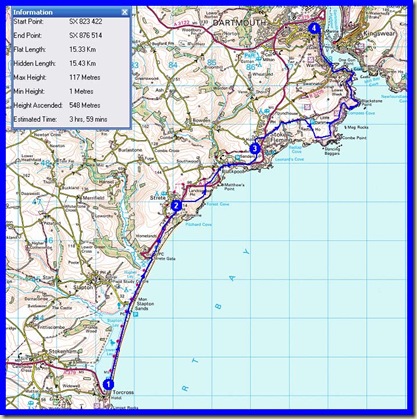 After being waylaid at the start by a café in Torcross, and distracted by the relics of Operation Tiger, we made our way through Strete and along the recently re-routed (to avoid roads) path to Stoke Fleming, before descending to Blackpool Sands in dull weather. 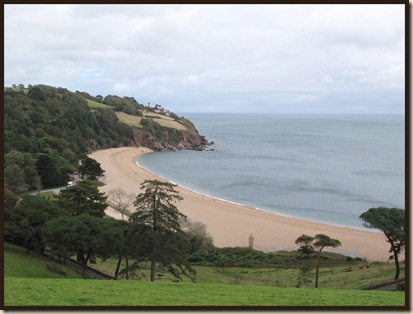 Continuing around to Combe Point, the sunlit sea drew our eyes all the way back to Start Point. 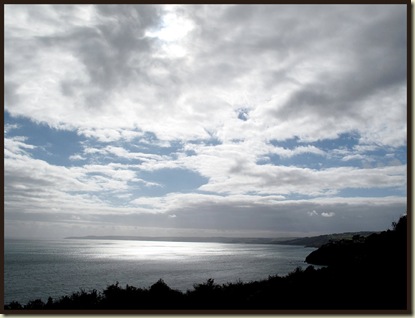 The previously deserted path gradually acquired walkers and fishermen as we rounded a corner to reach Dartmouth Castle, before the pleasant stroll around Warfleet Creek to Dartmouth. 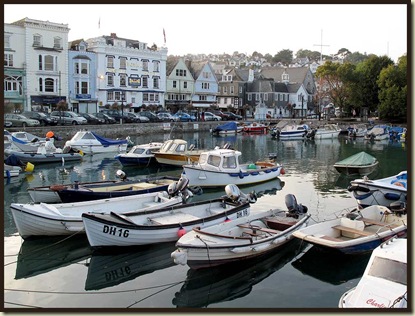 Taylor’s Restaurant provided a superb meal at a reasonable price, and our B&B at Brook House, 6 Market Street was clean and efficient, with a good breakfast. 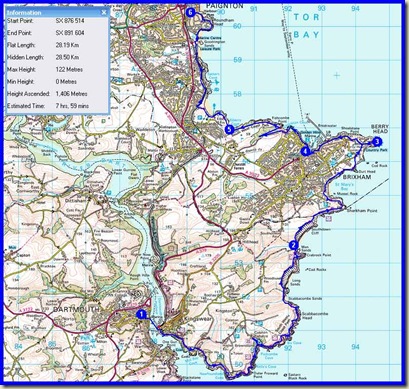 The ferry to Kingswear got us off to a good start, then we progressed through Warren Woods to the old Battery Buildings at Froward Point, where National Coastguard Institution volunteers keep an eye on the vessels coming in and out of the Dart Estuary.  On then to Pudcombe Cove, with grey seals in the bay and the delights of the café at the National Trust gardens at Coleton Fishacre.  Undulations continued to make progress relatively slow as we continued above Ivy Cove to Scabbacombe Head, then to Scabbacombe Sands, Long Sands, and Man Sands for lunch. 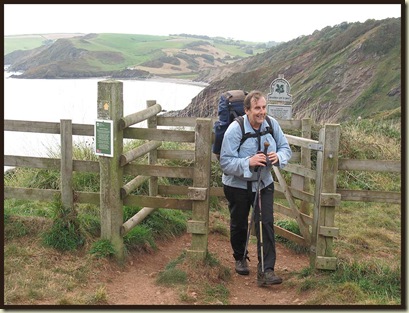 It was easier going now, to Sharkham Point and thence to Berry Head, where a strange man who had earlier requested advice on walking boots very publicly offered his new mate (Andrew) a Twix bar.  We escaped to the lighthouse to finish off my flask of tea before ambling into Brixham.

From the pleasant harbour of Brixham, where a replica of the Golden Hind reclines by the quay, it’s an easy walk (unless you get misplaced in Grove Woods) around the coast to Broadsands, and the start of many miles of intermittent beach huts.

Goodrington is dominated by some green spaghetti water slides, then after rounding Roundham Head and passing Paignton Harbour - there is no shortage of accommodation in Paignton – we stayed at the friendly and adequate Ambassador Guest House.  We failed to find decent food in the town centre and resorted to the Harbour Light Restaurant. 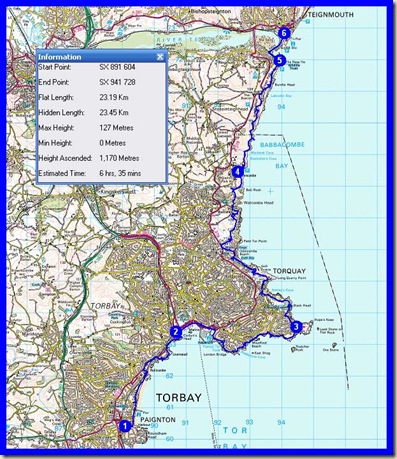 On a drizzly morning, I ambled along the sea front at high tide, largely on tarmac as far as Torbay. 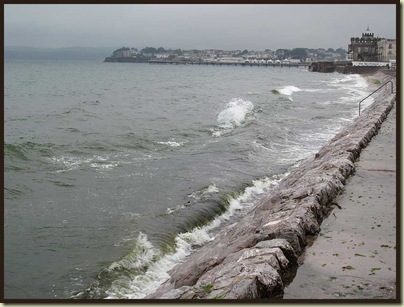 Around Thatcher Point some old signs point the way.  This marks the end of the ‘beach hut zone’ and the start of the ‘memorial bench zone’ of Torquay.  ‘Fawlty Towers’ was inspired by Monty Python’s Flying Circus’s visit to a nearby hotel run by an eccentric. 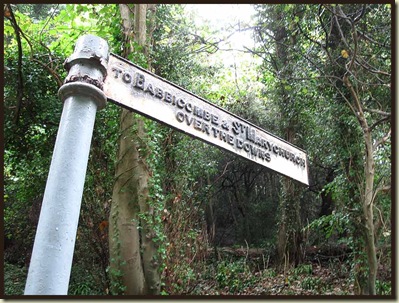 Dropping down to Oddicombe Beach the path then crosses underneath a Cliff Railway then inland to pass a Model Village, where Andrew and I lunched on a bench.  The old coast path is seriously eroded hereabouts, and unfortunately the SWCP has been re-routed inland.

It’s a very pleasant afternoon’s walk to Shaldon, above which there are splendid views to Teignmouth.  On dropping down to Shaldon, I half expected Weird Darren to emerge from this teepee, uttering words like “Hi Martin, do you like my new tarp?” 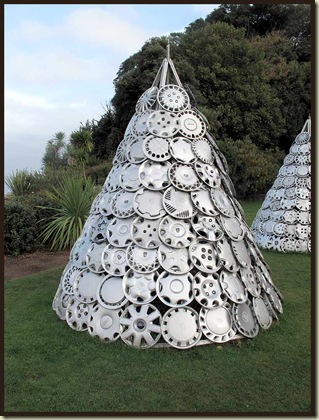 The small ferry to Teignmouth was still operating (until dusk), and we were soon installed in Devonia House B&B.

As in Paignton, there’s a dearth of good restaurants, but we struck lucky again, finding a superb Indian meal, though officially there has been no foreign invasion of the town since 1690, when it was the most recent place in England to be invaded by a foreign power (France). 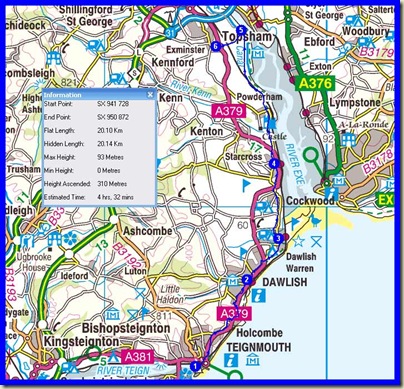 It was high tide again as we set off in light rain, so we had to head inland on predominantly hard surfaces, much to Andrew’s chagrin.  The tide was too high to follow the breakwater at Dawlish, so up and over we went, to Dawlish Warren and an abortive hunt for a tea shop.  Luckily, as we left the village we grasped the whiff of fresh coffee and were soon able to relax with doughnut and coffee outside an excellent little coffee shop.

The road to Starcross made further demands on Andrew’s delicate feet as we pottered slowly around the harbour at Cockwood. 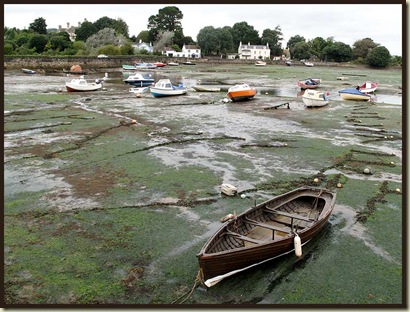 He was simply unable to continue beyond The Atmospheric Railway, and pointed to a nearby ferry to Exmouth.  “That’s my Coast Path route”, he exclaimed. 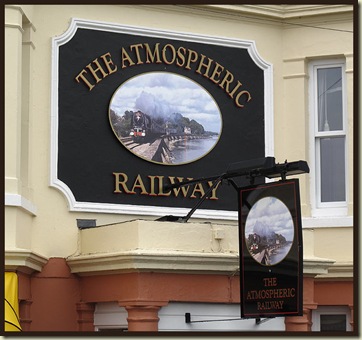 As Andrew bussed himself back to Exeter, leaving Exmouth until next year, I continued on along the SWCP as far as the Topsham Ferry, from where I headed across Exminster Marshes to pick up a bus to Exeter from the Swan’s Nest Roundabout.

It had been a pretty route, past Powderham Castle and its deer park, before an easy path beside the Exe Estuary to Turf (lunch) and the final amble beside Exeter Ship Canal towards Exeter. 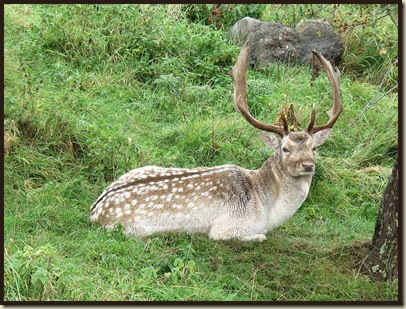 A slide show (about 50 images) can be viewed here, if you have the stamina!

great write up, glad to see you think of me out ont he trail ;)

fantastic photos especially of that stag.

Have enjoyed catching up with all your travels. Wonder at the effort of the cycle marathon and remembered holidays we had in Dartmouth. Pleased to hear latest news re Sue's shoulder. Hope it gets sorted. Lovely to see you last week.
Love from,
Dot

Thanks, yes it was good to visit Dartmouth again. And whilst Sue's muscle spasms are not improving, we are hoping that today's MRI scan will at least lead to a clue as to the source of the problem.

Darren, I always think of you whilst on the trail - sometimes it's all that keeps me going!