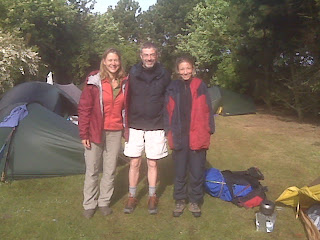 A leisurely start saw me strolling down to The Retreat (aka Glenesk Folk Museum) for breakfast with Tim and Kate.

Then it was on down the picturesque Esk valley, along pleasant paths in good company (Tim, Kate, Bernie, Martin, Jeremy and others) to Edzell. The last section, on my own through beech glades beside a river gorge, was particularly scenic.

A field ginnel led to the main street, where rucksacks outside the Tuck Inn revealed one of the Challenge's favourite pots of gold. Lunch, with Steve Gough and later joined by many others, including Alan Kay, who was the first person I encountered on my first Challenge three years ago, was sumptuous, delicious and lengthy. The chocolate nut sundae was wonderful.

It's not far to North Water Bridge from here, and despite the leisurely day so far it was only 2pm. Phone messages indicated there may be a small 'Bash' tonight with Heather T-S and others, with Heather having to leave for home early on Thursday.

It would be rude not to make the effort to say hello to an old friend...

So, a quick change of gear, on a full tank of fuel, saw me zooming on, past North Water Bridge, along the planned route, almost exactly as shown on the previous posting, to the dunes at Montrose.

Of all my approaches to the coast, this was the most direct and had the least road walking. Very satisfactory, with nice woodland interludes between quiet lanes, though there was a narrow passage of prickly gorse towards the end.

It also provided a last taste of solitude before the Fleshpots of Montrose and next week's partying with the Pixies of Hale.

A storm that hit me for an hour or two after passing North Water Bridge eased sufficiently for me to take a self-timed picture at my finishing point.

The firm sand steadily became softer as I approached the camp site via an increasingly laborious 3 km plod down the deserted beach, its pristine sands glistening in the low sun. Then it started to rain again. Quite hard. So when the camp site was finally reached at around 6.45pm it was good to see the familiar faces of David Albon and Heather T-S and accept their offer of porch space for the rucksack whilst I whipped up the Phreerunner.

Graham Brookes also arrived after a 'bagging' trip in the Arrochar area, so after saying hello to him, experiencing a warm dribble in the 'shower', and gathering my few valuables, I set off to The George for a beer with a select band of Heather, David, Skippy and Julie. Numerous other Challengers were enjoying the George's good food, but we were to move on.

It was a short stroll to the excellent 'Indian Cottage' restaurant, where we saw the day out in style. This included an 'awards ceremony' during which David Albon conducted a 'toast' for all Challengers present, depending on the number of times they have finished. Cameron McNeish's table yielded the largest number of 'first timers' (including Cameron), with today's toasts culminating in one for Skippy and Humphrey, who had just completed their ninth crossings.

The picture is of Julie, David and Heather, who all finished today (Wednesday), at Montrose camp site in Thursday morning's sunshine.

Congratulations on your 4th crossing Martin. A fine route done in fine style. We may just have to apply for this event next year!

Thoroughly enjoyed following your route Martin, (wish I could have been there!). Wonderful writing as ever.

Thanks Gibson, Louise, and all others who have commented. I feel you have been keeping me company (and motivating my early starts) for the whole trip.