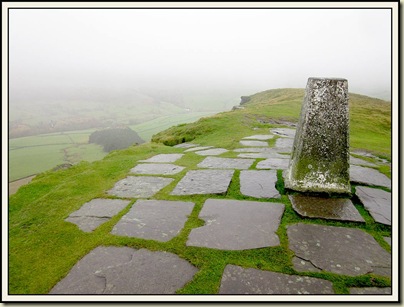 Is it really January since I was last up here?

Today I revisited that walk in the snow with JJ and Graham Brookes, this time on my own, with the object of further walking-in my new winter boots.  They had been comfy on the flat; how would they fare on some steepish slopes?

The route is shown below and is also described in my reports on previous visits here and here, though on those occasions we went clockwise around the reservoir at the end of the walk.

All recent visits to Shutlingsloe are described here – it’s a regular venue.

Rain was forecast – that’s becoming a habit – but it never appeared despite the low cloud and general dampness.

I was on my own today; the only others out walking were a few dog walkers and two noisy men (I’ve no idea why they were exchanging uncouth shouts) who reached the top of Shutlingsloe whilst I was enjoying my elevenses below the hill’s steep eastern flanks.  I was glad they returned the way they’d come.

The ground soon levels out below those eastern flanks and reaches a tarmac lane that leads down to the Crag Inn.  The brilliant chef of bygone years has long since departed, but this hostelry remains welcoming and friendly, with good pub food. 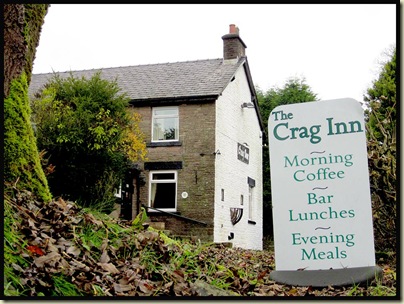 Beyond The Crag, field paths lead to another tarmac lane that is accessed via an ancient stile that the farmer seems paranoid about walkers not using.  Why anyone should wish to climb a high stone wall in preference to using this fine old stile is beyond me, but the farmer is certainly concerned (click link to slide show below for more).

The lane is soon left to climb steeply, whilst we take a gentle and well marked path from the valley floor to Oakenclough, near where a youth allowed his young labrador to bathe in the stream and then ‘mug’ me.

Hey, it was no laughing matter!

This is a lovely route.  Shutlingsloe slowly reveals itself behind you, whilst the flatlands of Greater Manchester and the Cheshire plain are suddenly revealed at the top of the sunken lane that runs down to The Hanging Gate.

That path can be boggy, so a pause to regain breath and drain the flask is always welcome before the ascent.  A visit to the pub is optional, it’s not off route as the path runs through its garden before dropping down to join the Gritstone Trail, which is followed most of the way back to Ridgegate Reservoir.

Today’s route left the ‘G’ Trail in favour of a narrow path to the right, in and out of a small valley, leading to the main ‘drive’ around the reservoir, across which the yellow leaves on the trees certainly brightened the otherwise dull day. 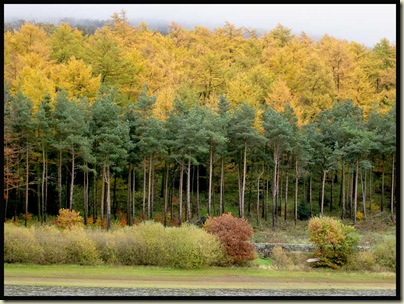 And that was it – this time Naismith would have taken 3 hours 10 minutes, a time that I was happy to better by some 20 minutes.  The new boots had remained comfortable throughout; my fears about having to spend some time breaking them in appear to be unfounded.

That left me plenty of time to get to Macclesfield, where coffee and cake and a good old chinwag with Geoffrey and Nick was the highlight of the day.  Geoffrey (hello, sorry this has taken so long to write) is one of very few friends from my former life (ie w**k) who despite his love of trail biking follows this blog; and I still harbour happy memories of weeks of ‘study’ on Donald Rich’s residential courses held in Andover, when Nick and I took our evening medicine in warm surroundings by a pool (table) whilst others remained frozen (literally) to their study manuals except when Bohemian Rhapsody was playing on TOTP.

It was great to see you both.

As promised, today’s route (enjoy – it’s a good one) is shown below, and there’s a slide show here. 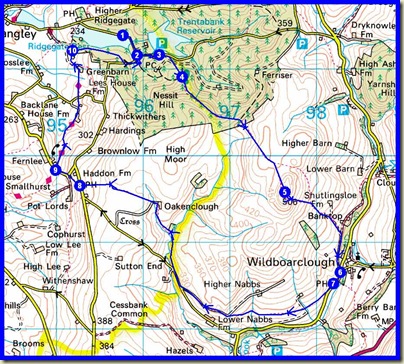 Well, Martin, here I am blogging at last - I am no longer a blogger virgin! By the way, does this constitute blogging?

Anyway it was great to see you in the office (except that was my lemon bun you ate, you bugger)and it was refreshing to talk about something other than w**k.

Your recounting of our time at Donald Rich's in Andover sent a shiver down my spine; as though I was being propelled back through a time-warp; it seems like a whole lifetime ago.

Keep on enjoying your retirement, you lucky sod!

Good effort, Nick!
That bun was one of the best I've ever had!
Leaving a comment doesn't actually make you a blogger, but it does bring you into the congregation.
Bloggers love to receive such comments, or emails like the ones Geoffrey sends from time to time. Generally, very few people who follow or read particular blogs actually get around to making comments - the comments are mainly made by other bloggers. Those who rarely make comments are known by some as 'blog stalkers'.
People who want to keep track of particular blogs can do so by signing up with Google and then using Google Reader to notify them when each blog on their 'reading list' is updated. Some of your staff probably do that, hopefully not spending too much time at work!
It was great to see you both (looking very relaxed if I may say so), and I look forward to calling in again in a few months' time.
Have fun.
Martin