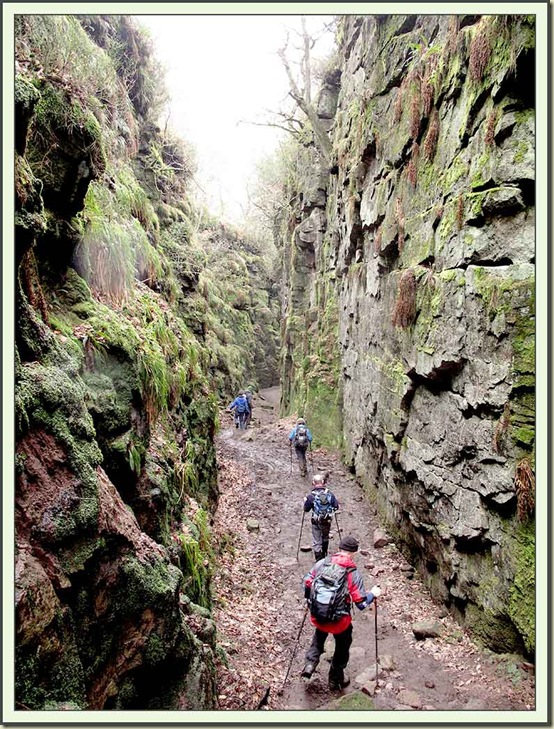 With a chance to reciprocate Wolfgang’s hospitality to me last year in Austria, we enjoyed his company for this classic circuit over the Roaches to Lud’s Church, returning by the Dane Valley and The Hanging Stone.

Shortly after starting the walk, the climbing hut that is a memorial to Don Whillans is passed.  It’s surrounded by large boulders on which children can often be seen clambering before they tackle one of the many climbs up the rocky cliffs of the Roaches. 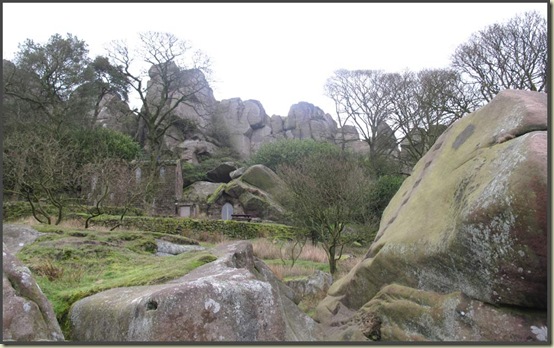 Our walk passed uneventfully over the Roaches on a cool, cloudy day, after which the shelter of the dark woodland of Back Forest was in stark contrast to the open moor.

The deep cleft of Lud’s Church (above) wasn’t as muddy as expected.  It’s a wonderful place; we were the only visitors.

A pleasant stroll beside the River Dane led to Danebridge.  On the way we spotted this huge (by Peak District standards) rock fall that had caused the river to back up a bit.  I wonder whether any attempt will be made to clear the debris. 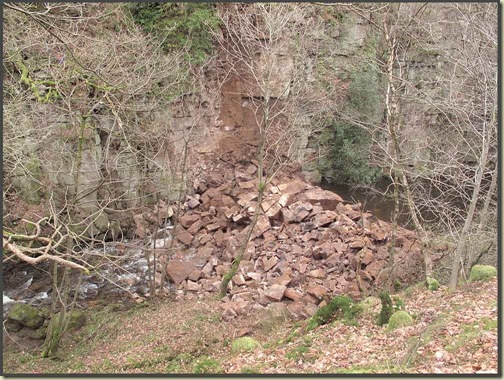 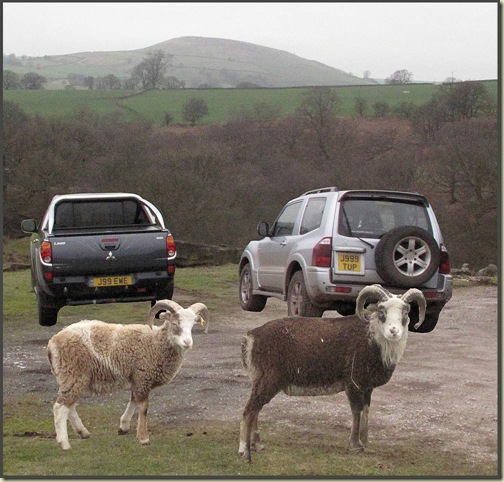 A rare breeds farm along the route sports a variety of unusual sheep.

JJ and I lagged behind the other four, in the hope that they would accidentally turn off to the Ship Inn, which we’d decided to leave out of today’s itinerary, having already scoffed several rucksack loads of provisions. 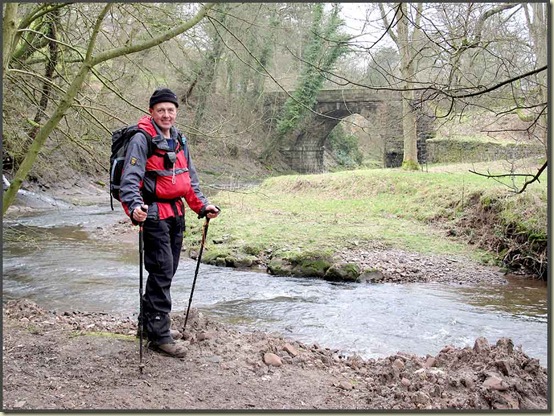 The Snowdrops around here don’t see much sun, and are very late in flowering. 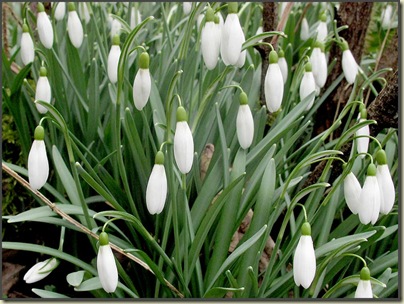 Our ruse didn’t work – the others ignored the pub and skipped merrily on through pleasant woodland and up a long field towards the conspicuous prominence of The Hanging Stone. 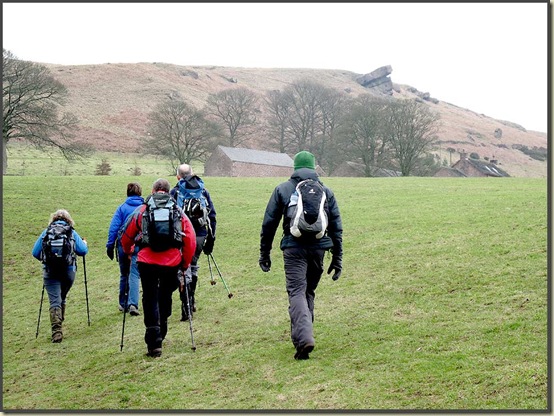 There’s a plaque on the front of the stone in memory of a local landowner, Lt Col Henry Courtney Brocklehurst, who served in both World Wars and was killed in Burma in 1942, at the age of 54. 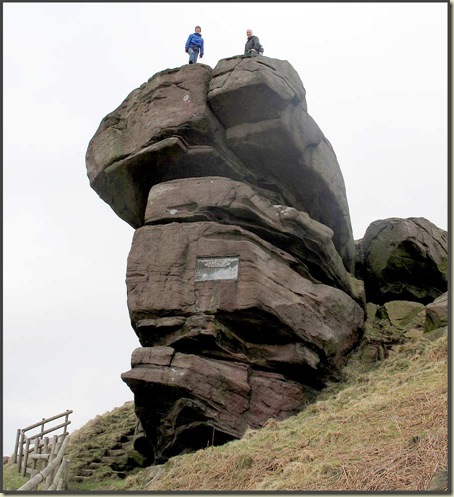 On the other side of the stone there’s an older (1874) memorial to Burke, a dog.

We stood near the top for a group photo in view of Shutlingsloe, but Viv and Sue decided to block out the summit… 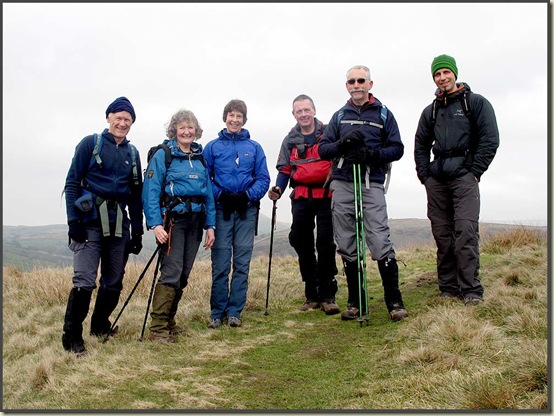 The walk concluded with a stroll along a delightful ‘permissive path’ that led back to Roach End and a short stretch of tarmac back to the cars. 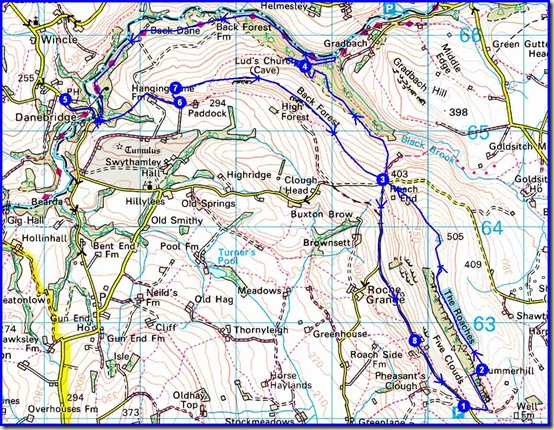 We’d done 17 km, with 690 metres ascent, in a leisurely 5 hours, in excellent company.  There’s a slide show (30 images) here.  Thanks to Wolfie for a couple of the photos.

We’ve been here before – for other reports (which will include future ones) on Roaches walks, click here, and for Lud’s Church – mostly the same walks as those in the Roaches – click here.

This is one of the few photos I could ever have sold – it was used for the invitation to a naming ceremony for two children. 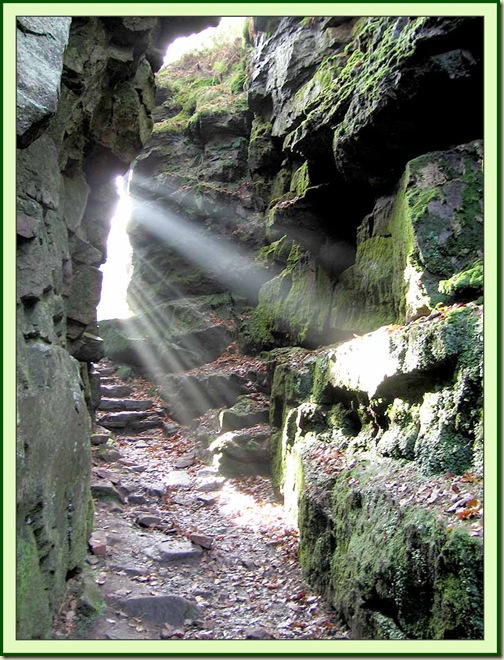 I always wonder when spoting a landslip if there was someone walking past at the time who is now buried!

We wondered that as well James, but JJ was still with us and he was the only person we could think of who would be daft enough to wade down a ravine when there's a perfectly good path just a few metres away!
[Sorry JJ, you'll just have to get that 'Victim' tattoo removed...]

That takes me back a bit to desperate moments on Valkyrie, a climb that many enthuse over,but not me. I think you can just see its buttress in your photo. Sounds like a good and varied day out.

Beautiful first photo there Martin, the roaches are one of my favourite places in the Peak District. Is it true the Peak Authority has just had to sell them off?

I'm not a fan of personalised plates, but I enjoyed the sheep farmers' plates.

JJ - I am amazed you hang around with these nasty boys!

G - here's what the Roaches website, http://www.roaches.org.uk/ has to say:
"The Roaches are up for sale! The Peak National Park-strapped for cash-are looking for organisations to take on the management of the Roaches. We hope and expect that there will be many safeguards in place to ensure the continued conservation of this unique area."
There's more here:
http://www.outdoorsmagic.com/outdoors-news/roaches-up-for-sale/7161.html

Alan - I think JJ is also amazed that he hangs around in such company. I think he's constantly planning escapes...

Last photo is superb. Like the walk as well. Interesting history to it.

Thanks Martin. Sorry to hear that you encountered a careless rock on the Cumbria Way. Perhaps you should have 'gone high'!