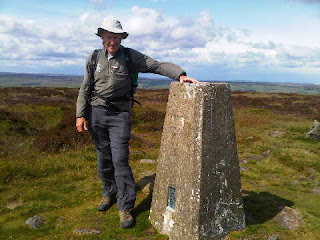 Another day, another trip.

Andrew (aka Notchy) and I have set off on a 'luxury' backpacking trip from Saltaire to Appleby in eight days. We are following a route devised in 2007 by Saltaire residents, Chris and Tony Grogan.

Full details can be found at www.daleshighway.org.uk

A successful rendezvous at Manchester Piccadilly, followed by an hour and a half's £7 worth of efficient rail travel saw us in Saltaire by soon after noon.

We spent a while exploring the industrial village built by Titus Salt in the mid 19th century, a prime example of 'Victorian philanthropic paternalism'.

By 1892 Salt had been dead for 14 years and his company had gone into liquidation. It wasn't until the 1980s, when another visionary, Jonathan Silver, bought the old mill and introduced an interesting mix of uses, that a turn around started. The railway station reopened and the old mill cottages became desirable for young commuters. New shops, bars and cafés appeared and Saltaire was once again booming.

We can confirm that it remains a smart, vibrant place to this day - certainly that was the impression we gained whilst lunching at Vicars Cafe Bistro, near Victoria Hall, the venue for a recent Antiques Roadshow.

But we were here for a walk, and a very pleasant afternoon's stroll it was too, basically directly north to Ilkley. I took diversions to take in Hope Hill, as well as Ilkley Moor's 402 metre summit, and the Thimble Stones, but even those excursions involved little extra effort and we arrived conveniently outside our hotel directly from a footpath above the town.

It was good to see plenty of curlew today, after noting their scarcity during my recent walk across Scotland. Lapwings, skylarks, meadow pipits and a sparrowhawk were also very much in evidence, but there were no oyster catchers, and there seemed to be fewer birds than when I passed along a very similar route two years ago.

Whilst there was no sign of any moisture on the surface of the moors, numerous piles of paving slabs were strewn across the summit of Ilkley Moor, awaiting a path construction team, indicating that the moor is unusually dry just now!

We encountered a good smattering of walkers, runners and mountain bikers, including a man in a kilt and some scout leaders on Ilkley Moor who kindly took the above photo.

Below the spa baths at White Wells, which date from 1703, lies the prosperous town of Ilkley, where we later savoured the delights of its Piccolino restaurant. However, above White Wells, a 3500 year old stone circle, the Twelve Apostles, stood proud alongside our route, and Rombalds Moor sports numerous examples of prehistoric rock art dating from over 3000 years ago. Most of the 350 examples are off today's beaten tracks, but I did come across a couple of the sites as I descended from the moor towards Ilkley.

That's all for now. We are hoping for another fine day tomorrow.

Hmm, seem to remember getting married at said Hotel some years ago - had a good post wedding walk on Ilkley Moor next day, good for clearing the heads of our guests! H.T-S.

I've always wanted to visit Saltaire, sounds like a fascinating place. A friend of mine got married in Port Sunlight a year or two ago and these kind of developments strike me as representing the kind of capitalism that doesn't exist nowadays.....all that and it seems as if there's a decent walk from there to boot :-)