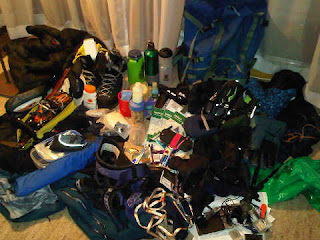 Sue and I spent a happy few days here a couple of years ago, when our backpacking plans were foiled by her poorly neck. The photo on the last posting was from that trip.

John and Janet have again kindly allowed me to use their apartment, since I've got here a day early for my Haute Route trip. I've only been here a few minutes and look at the mess!

At under six hours, door to door, the journey took me rather less time than many parts of Scotland require. And that was despite a 'go slow' by ground staff at Manchester, delaying our departure by nearly half an hour.

Geneva was efficient by comparison, and I enjoyed (yes, Enjoyed is the right word) my brief encounter with the luggage carousel. It started up shortly after we emerged from passport control. We waited in anticipation as it clattered around pointlessly for a couple of circuits. Then a lone blue bag appeared at the top of the ramp, before rolling gently down to the carousel. There wasn't another bag in sight. I picked the blue one up and headed for the exit, trying not to look too smug!

Chamexpress soon turned up to whisk me and four others to Chamonix - a door to door service that had me fumbling for the keys to the apartment when I arrived earlier than expected...

Thanks for your comment, Alan - this trip may be 'Very Interesting', I suspect, when the gentle preamble is over.
Back to Index

Sent using BlackBerry® from Orange
Posted by Phreerunner at 23:28

Sounds wonderful, Martin. Hope you're having a terrific time!