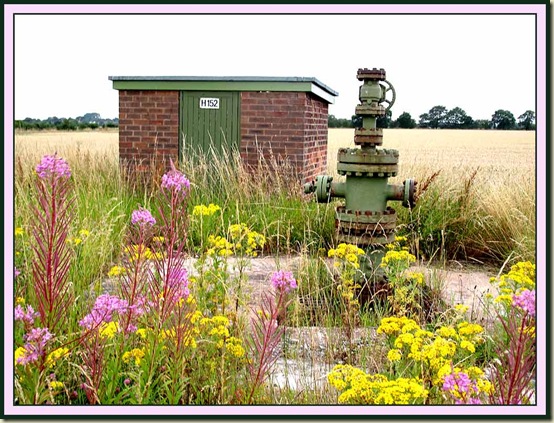 The famous five duly assembled at 6.50 pm in the Golden Pheasant at Plumley, for tonight’s short stroll devised by Notchy, our resident guide to the by-ways and footpaths of Deepest Cheshire.

The walk didn’t start until 7.30 (you never know who might turn up, but today we drew a blank), allowing some of the congregation to top up with beer or rosé wine. 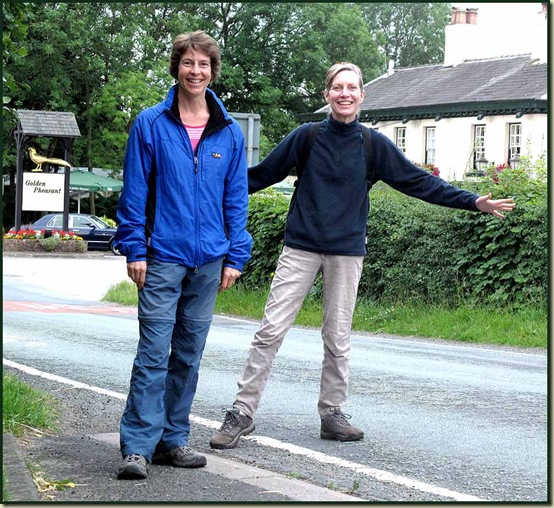 After a brief potter down the main road, during which it was noted that the otherwise posh station (it had tubs of flowers) needed the white lines on the platform repainting, we took a turn towards Brookhouse Farm and soon came upon a trickle of water that was trying to negotiate its way through the ever more invasive Himalayan Balsam that was lining its banks.

Notchy explained that this was Peover Eye, a river that runs from near Macclesfield, almost past his house in Lower Withington, and on to join Smoker Brook (hence the name of the pub) in Lostock Gralam before moving on to become the River Weaver. 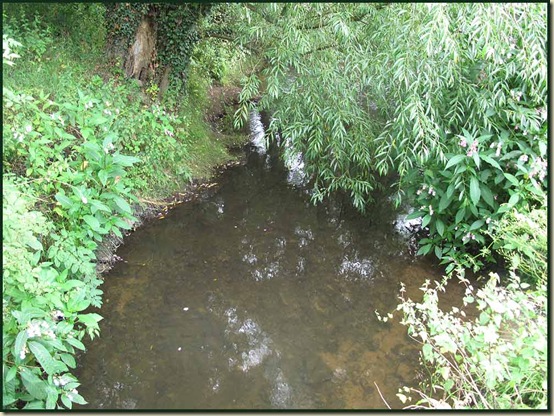 Impressed by Notchy’s local knowledge, we allowed him to hold court for a few minutes as we strolled down a lane towards Holford Hall. 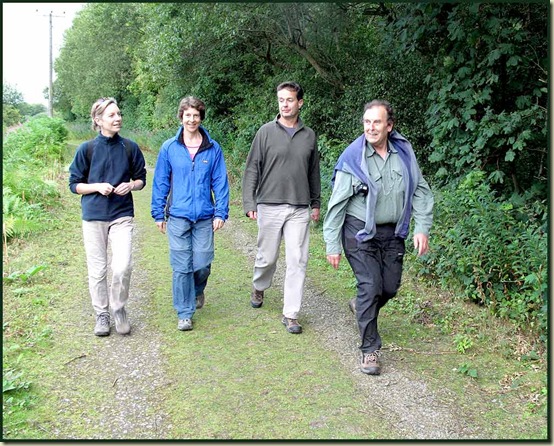 We moved from the gentle ambience of a country lane, across the railway line to a desolate post industrial area with Street Furniture. 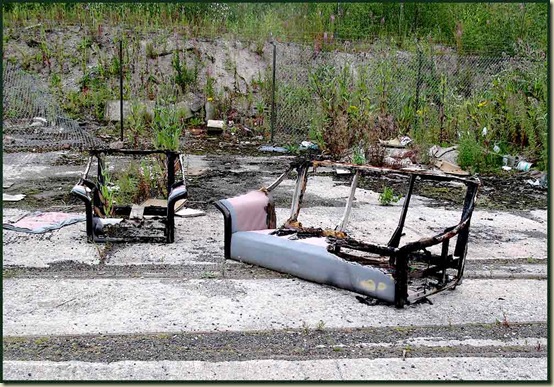 The works that used to be here have been flattened and fenced off, leaving an unused lane beside the railway line, lined with Rosebay  and Great Willowherbs and the bright yellow blooms of Common Ragwort. 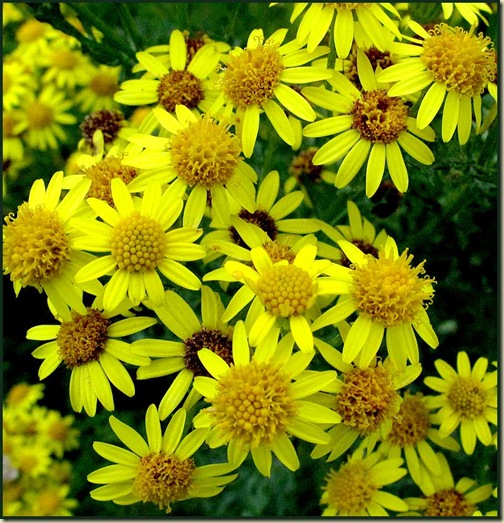 A left turn took us into an area of industrial antiquity that has now become meadow land used for grazing cattle.

It’s the scene of what was once a huge industry, as vast salt deposits lie below this part of Cheshire.  For several hundred years, salt has been extracted from the heart of Cheshire.

Wikipedia tells me that rock salt was laid down in this region some 220 million years ago, during the Triassic period. Seawater moved inland from an open sea, creating a chain of shallow salt marshes across what is today the Cheshire basin. As the marshes evaporated, deep deposits of rock salt were formed.

A settlement, Condate, was built during Roman times at the current location of Northwich.  The Romans used lead salt pans to extract the salt from the brine. Salt pans and 1st century brine kilns have all been found around the Roman fort.

The salt beds beneath Northwich were re-discovered in the 1670s by employees of the local Smith-Barry family. The family were actually looking for coal when they accidentally discovered rock salt in the grounds of their house, Marbury Hall, Marbury, north of Northwich. Salt extraction started shortly afterwards.

In the 19th century it became uneconomical to mine salt, and so extraction was achieved using water as a solvent. Hot water was pumped through the mines, dissolving the salt, with the resultant brine being pumped out and the salt extracted from the brine. This technique was known as ‘wild brine pumping’, as compared with ‘natural brine pumping’, which involved the pumping of natural brine (as opposed to industrially dissolved brine) but which resulted in weakened mines and led to land subsidence as they collapsed. I understand the ‘natural brine’ levels have now returned to ‘normal’.

I can’t locate the exact history of these particular pumping stations, (see header, and the picture below) but they are neatly labelled and contain pipes and boiler houses, etc, which look as if they were in use for wild brine pumping until relatively recently.

According to Wikipedia, manufacture of white salt for food and allied industries is now concentrated in Middlewich, in the manufacturer, British Salt, who sell under the name Saxa, and also through third parties e.g. supermarket own brands. Salt produced by British Salt in Middlewich apparently has 57% of the UK market for salt used in cooking.

The UK's largest rock salt (halite) mine is at Winsford. It is one of only three places where rock salt is commercially mined in the UK. 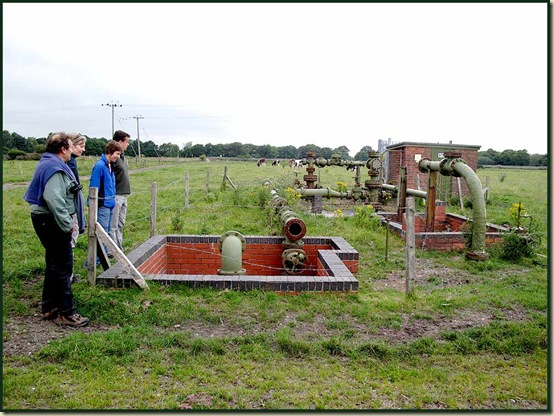 Leaving this area of industrial archaeology, we moved into Cheshire farmland.  As we have previously discovered, many Cheshire farmers are ignorant of the needs of walkers and fail to keep paths free from crops.  Here’s one of several examples found on tonight’s walk.  This crop, whatever it is, is extremely difficult to walk through, and the farmer had left hardly any space between the crop and the hedge. 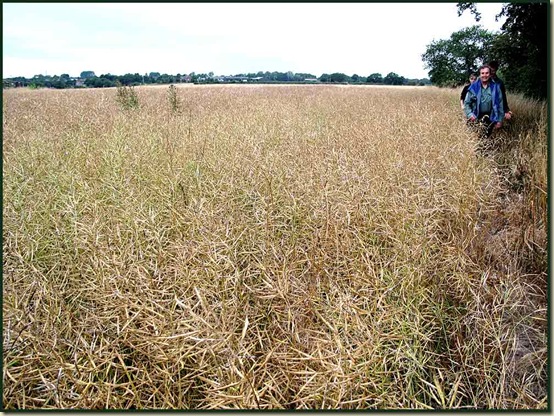 Would you believe that this is a picture of a waymarked footpath? 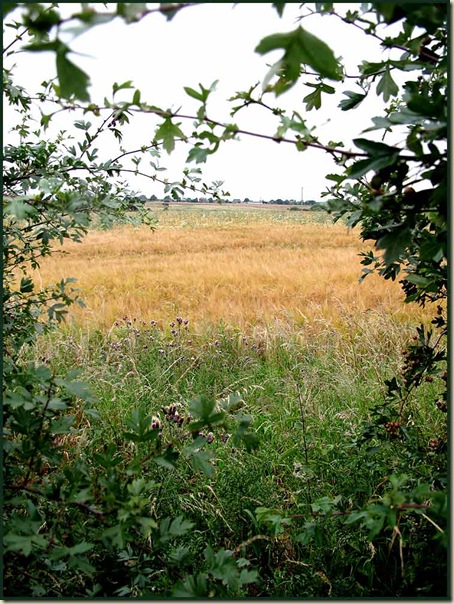 Do you believe me now? 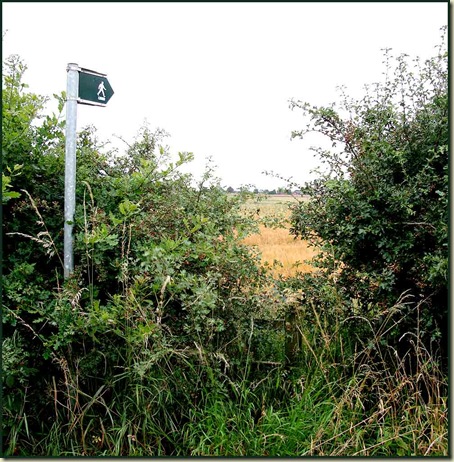 Despite my better judgement, I was encouraged to avoid trampling the crop.  A way round was found.  The next obstacle was a field of sweetcorn, well over head height.  By now the light was fading, so my photos are all blurred due to Notchy’s red hot pace (thirst was getting the better of him).  At least it hadn’t rained, otherwise we would all have been drenched from the vegetation.

Past some friendly horses with what appeared to be blinkers, (but they turned out to be fly/midge hoods), we progressed along easier paths and lanes through the Cheshire countryside, to emerge on the main Plumley to Lower Peover road near Holly Tree Farm, which is home to a family of meercats. 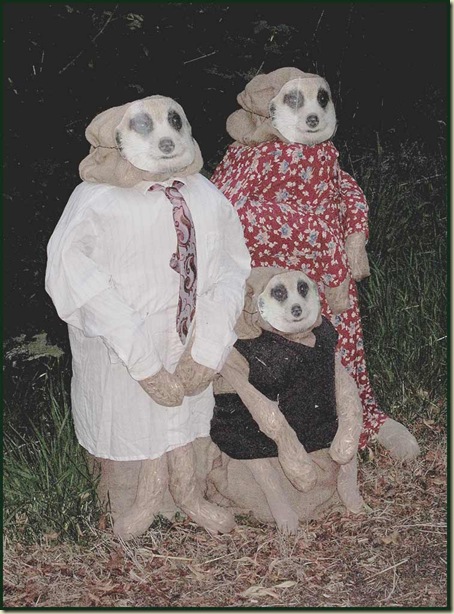 “I need a beer” gulped Notchy. 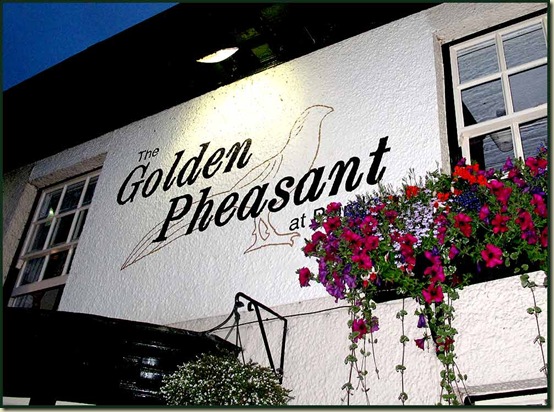 So ended a very pleasant 8.5 km, 2 hour outing, as per the easily navigable route shown below.  The vegetation really wasn’t too bad, and the route was interesting, but at this time of year you should stick to doing it in dry conditions, or you’ll be soaked by the crops. 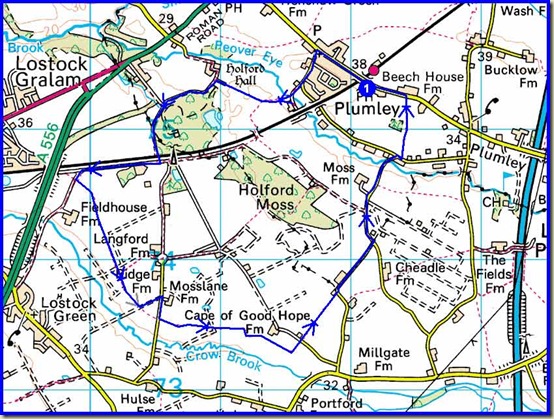 Fascinating stuff Martin, and as if having very similar blog designs wasn't enough, I'm about to write something 'salty' myself!

Your mappage indicates that you were walking through/past the wellheads of the Ineos brinefield, a large area where controlled brine pumping is ongoing. The wellheads are in small enclosures permitting the fields to be used for other agricultural purposes.