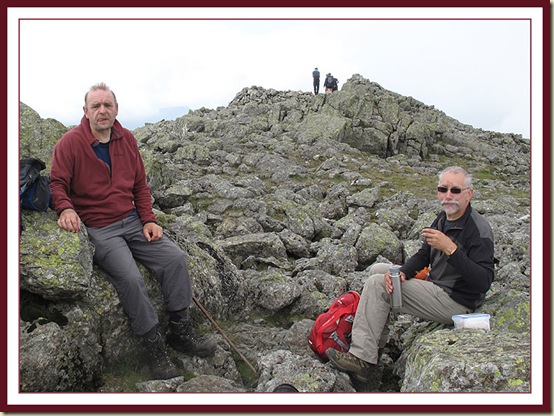 I had no idea where in the Lake District I was going today, as I strolled round to Rick’s house soon after 7am.

All was revealed during the course of the next couple of hours, as we pootled up to Lancaster to transfer to Stuart’s charabanc for the trip to Ambleside and onwards over Wrynose and Hardknott passes to Brotherikeld.

So we set off at 10am along the pleasant path by the River Esk that leads to Lingcove Bridge, a wonderful old packhorse bridge in the middle of nowhere. 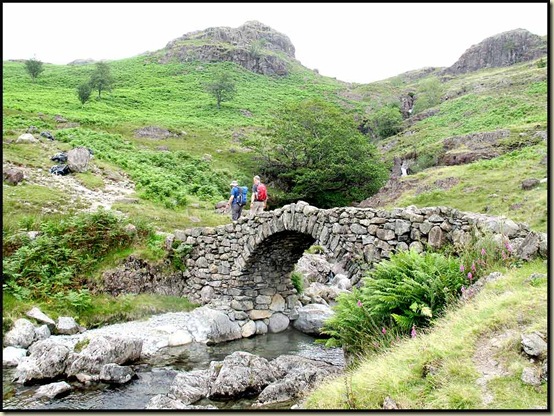 There were very few people about – just the odd walker, and a group of campers near the bridge, enjoying a bathe in the clear waters just below it.  Whilst we had driven up under blue skies, the air here was humid and midgy, with the high tops doused in light cloud.

The hillsides were colourfully decorated with bright yellow swathes of Bog Asphodel. 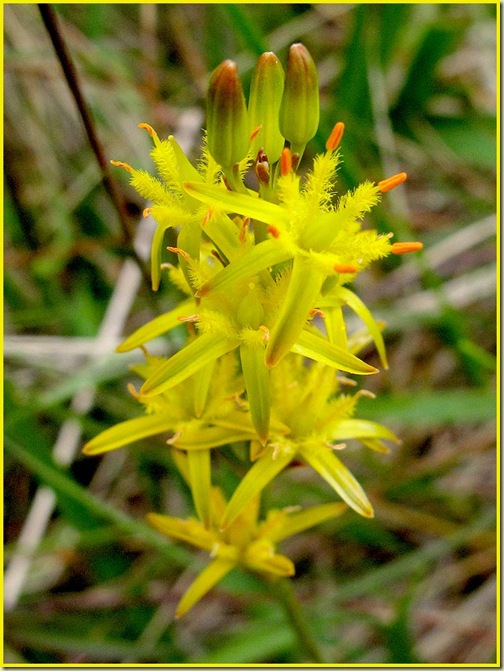 My ‘legs’ came off for the ascent to Great Moss, but midge bites forced them back on after the ascent beside Cam Spout.

Here Rick contemplates the (easy) climb, up the rocks to the right of the waterfall.  “If only it was frozen; I could practice my ice climbing” he jested. 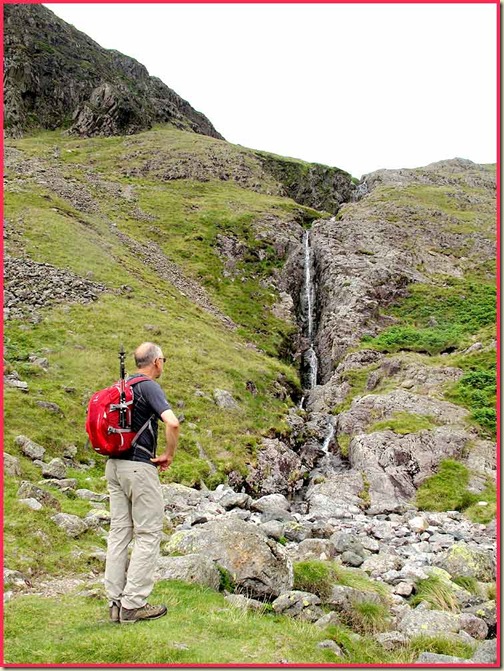 The path leveled out again at the top of Cam Spout, but it remained a sweaty climb on this still, humid day, up the hanging valley towards the East Buttress of Scafell.

At the first opportunity we followed a stream emanating from a steep, stony gully, all the way up to Foxes Tarn – a nearly invisible pond that is claimed to be the smallest ‘tarn’ in the Lake District.

The gully was full of the pretty flowers of Starry Saxifrage. 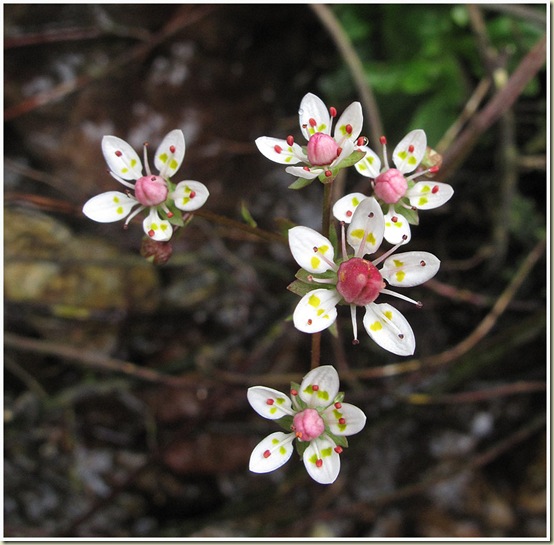 It was deemed appropriate to take a self-timed photo of today’s elite team at Foxes Tarn, the full extent of which is visible in the background! 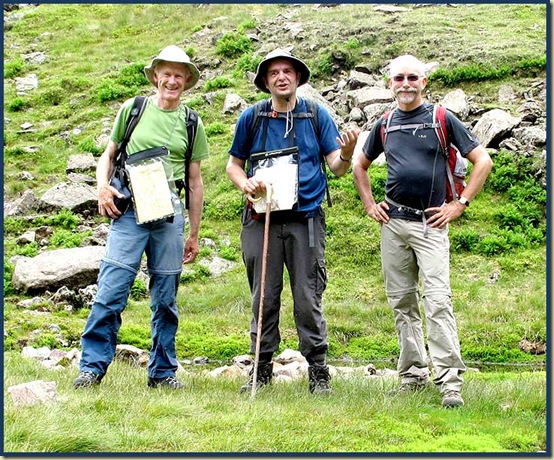 A short but tiring final pull over loose ground led to the summit of Scafell, where we enjoyed a leisurely lunch with the midges.

There were quite a few others up here, but none had come from our direction.

After a long pause during which Stuart took a lot of persuading that heading off to the north was not what he had intended, we followed the direction of the white needle of the compass, over Long Green and down to Slight Side.

An elderly man with a dour expression passed us, refusing to acknowledge our presence or our greetings.  It’s a shame that such people should combine their desire for solitude with arrogant rudeness.

Meanwhile, as the rude old man rushed down, we pottered slowly on, admiring the views down to the River Esk, where the river valley and Scar Lathing were bathed in sunshine, backed by the gloomy ridge of Hard Knott. 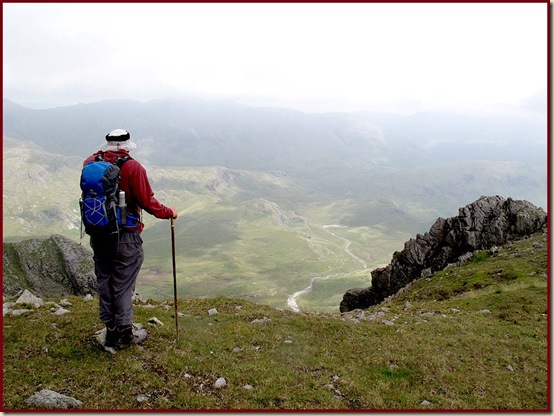 It was a long but gentle descent back to the valley, across the upper rim of Cowcove before crossing Cat Cove Beck.  We had strayed for too long on the path leading to Stony Tarn, so a cross-country route was deployed.  Then we missed the turn left that we had planned to take beyond the ravine running below Cat Crags.

That left us with no option but to follow the gentler path all the way down to the road above Wha House Farm.  A forest of bracken failed to hinder our progress! 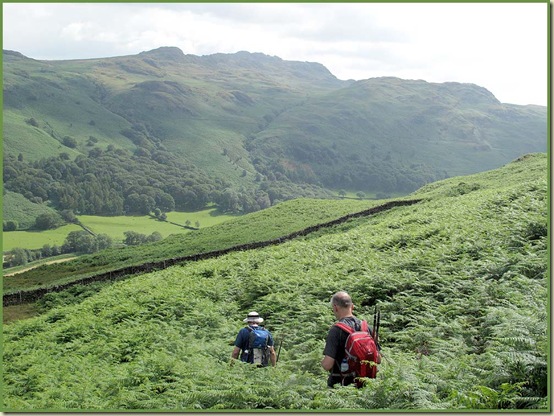 Once down, a short stroll along the road returned us to the car, with good views back up to the high peaks, which were slowly emerging from their misty embrace.  But whilst Bowfell and Cringle Crags are clear in this picture, their freedom was intermittent and was not enjoyed by the Scafells. 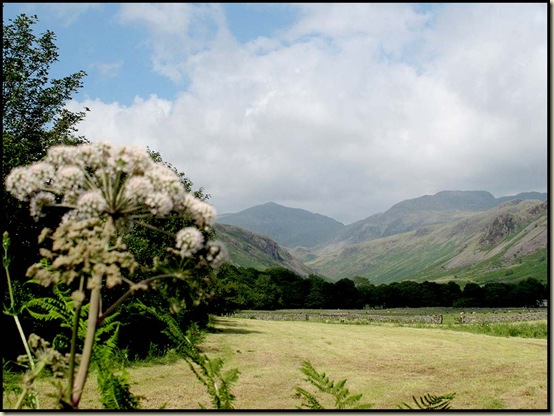 Never mind, despite a bit of mist and a few midges, it had been an excellent outing, enhanced by a visit to the Watermill Inn at Ings for some refreshing, locally brewed beer.  We know it was locally brewed because the brewer was plodding around in his wellies. ‘Phil will be envious’ I thought…

Here’s our route – a fairly ‘bog standard (no bogs today)’ route up and down Scafell, but not one that I’ve done for some time.  Very enjoyable, and back home for tea in Timperley by 7.30pm. 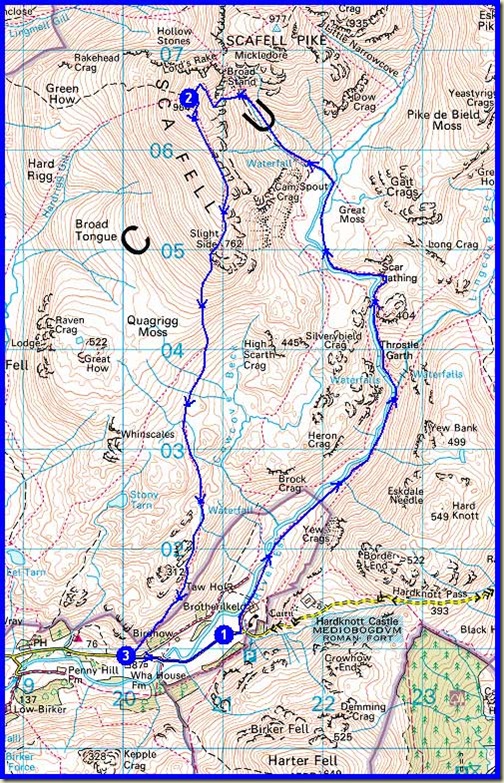 Anquet (above) claims 15.5km and 1024 metres ascent for this walk, which took us a leisurely 6+ hours, whilst my Garmin Gadget (see below) recorded 17.25km and only 902 metres ascent.  Who really needs stats anyway? – its just a habit I’m addicted to…

There’s a short slide show here – if you’ve got this far you may be interested!

I must admit i do prefer this way up Scafell or Scafell Pike . It’s just so much more pleasant.
Going to Sheila’s mums tonight so hopefully i will get a good view going over Birker.

Do you think your Garmin needs calibrating to your gait?

Enjoy your trip, Alan. The Garmin is a GPS, not a pedometer! It can't be calibrated, and I think it's probably pretty accurate apart from overstating the distance a little.

Hi Martin,
My thoughts were that some Garmin GPS’s that calculate cycling, running, walking etc need gait calibration. thoughts yours might be this type.
For a change it looks like we will get some decent weather this weekend. Hopefully we can persuade Sheila’s mum to step out.

Have you imported any of the tracks you've recorded with your Garmin Gadget into Anquet to see how well it overlays the route that you've plotted? It should show up any spurious waypoints that it's recorded - or whether the path on the ground is at variance to the line marked on the map.

Just perusing your blog to 'borrow' one of your walks for tomorrow morning. The main contenders are currently a repeat of last year's Christmas walk, or The Roaches.

Lots to choose from, Gayle, but the Roaches walk we did on 4 March this year is very good - should take you rather less than our 5 hours.

When I first got the Forerunner I investigated file conversion to Anquet's .arf format, but decided it was beyond my technical ability, so I can't overlay the routes onto my Anquet OS maps. I may revisit the problem, but I couldn't find any way of doing it when I first looked.

Will you please stop going for walks.
I'm getting very jealous now!

Oh dear, Andrew. Whilst I have enjoyed staying in and reading about your exploits, it's summer, and Sue gets fed up with me if I stay indoors for too long. I go for bike rides as well as walks, you know!

Hi Martin,
Sounds like a great day out.
I did that route by Fox's Tarn on Monday.
I've never been sure whether doing Lord's Rake is a good idea or not. Do you know if its alright?
I was in a bookshop the other day and saw 'A Dales Highway' booklet and remembered reading your blog about it so I bought it. I was thinking I might do it in the autumn.

I've been up Lord's Rake many times, Ethan, but not in recent years, as I also have heard that it may be dangerous. I haven't heard of unusual accidents there, so it may just be a H+S thing. Wasdale MRT have it as an 'accident black spot' with 10 rescues in 15 years, and their last entry was in April 2010, when they regarded it as 'passable with care', so personally I think I've been in much more dangerous places than that in recent times. But not on the Dales High Way, which you'll probably find a breeze in about 5 days. Given where you live, it's an excellent choice, but worth a bit of research as to where best to camp.