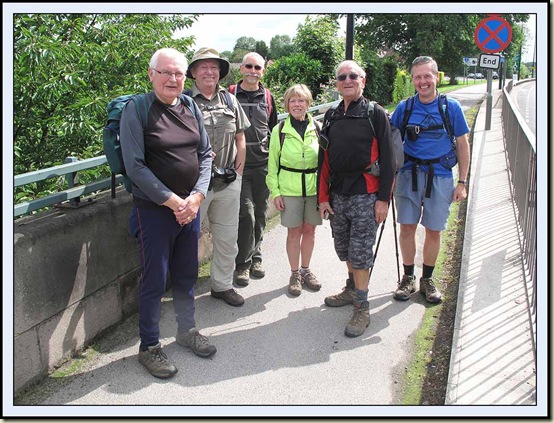 Readers may recall previous visits to this trail on 23 February and 23 March.
Having missed Part 4 of the trail, I joined various LDWA stalwarts on the recently published Part 5.  Seven of us set off from a lay-by in Hollins Green.  We were soon joined by the creator of the trail, Roy Bullock, who pointed out the ‘hundred’ marking on the other side of the bridge, denoting the border between Salford and West Derby, two of the six Hundreds of Lancashire.
The hundred of Salford was an ancient division of the historic county of Lancashire, in northern England. It was sometimes known as Salfordshire, the name alluding to its judicial centre being the township of Salford (the suffix -shire meaning the territory was appropriated to the prefixed settlement). It is also known as the Royal Manor of Salford and the Salford wapentake.
The Manor or Hundred of Salford had Anglo-Saxon origins. The Domesday Book recorded that the area was held in 1066 by Edward the Confessor. Salford was recorded as part of the territory of Inter Ripam et Mersam or "Between Ribble and Mersey", and it was included with the information about Cheshire, though it cannot be said clearly to have been part of Cheshire.
The area became a subdivision of the County Palatine of Lancaster (or Lancashire) on its creation in 1182.
So, the history of these parts goes back quite a long way.  There’s more information here (from which the above information has been extracted).
I can’t believe that I failed to photograph ‘Marge and Steel’, the sculpture designed as a gateway into Salford from Warrington. It is symbolic of the Margarine Factory and Irlam Steel Works, one of the biggest in the country, and the contribution made by the local people to the local economy. It is also the first public art on a roundabout in Salford.  The design is based upon an idea developed with the community. Children wanted a modern superhero theme and adults talked about the Steel and Margarine works that used to be here. Retired workers remembered the tea dances they enjoyed. An idea was developed to portray the dance of these two industries which forged people’s lives together in Irlam and Cadishead.
We strolled along between the road and the Manchester Ship Canal.  That was the theme of today’s route.  A high level bridge linking Carrington with Glazebrook was soon reached.  Apparently this used to be a low level bridge across the River Irwell, before the creation of the Ship Canal.  Shortly after the bridge there’s an old shunting engine, fairly recently painted and renovated. Its working life was in the CWS. soap works at Irlam. It had no fire to stoke and its steam reservoir was charged with steam from a boiler in the factory. This avoided the soot and fumes common to other engines. After the closure of the works it fell into disrepair and was due to be scrapped.  Then the local Rotary Club "adopted" the engine and the road building firm building Phase II of the Irlam and Cadishead by-pass (Birse) offered to restore and relocate the engine to a display site by the new road. 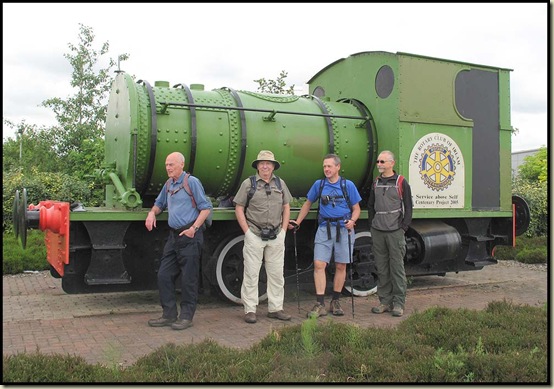 The road soon regains the side of the canal, and before passing under another high level bridge, housing the very much alive Manchester to Warrington main line, we observed the entry of the River Mersey into the Ship Canal, at the end of its short journey from Stockport. 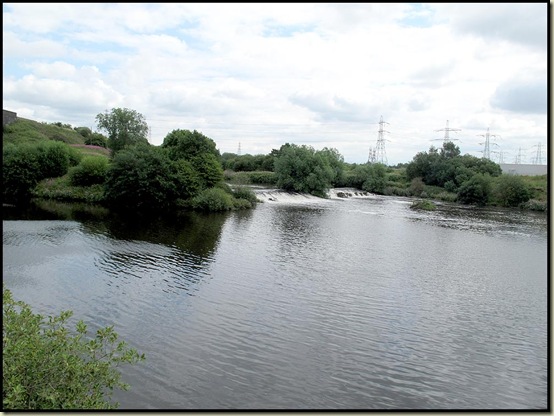 Despite being in the industrial heartland of the north west, we were subjected to a short interlude of ‘rain forest?’! 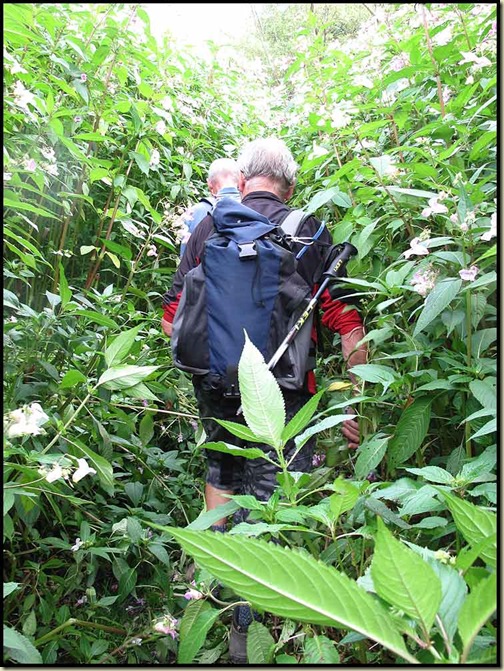 There were lots of flowers to be seen, mostly common to scrubland and meadow, including the Himalayan Balsam shown above, and swathes of Rosebay Willowherb. 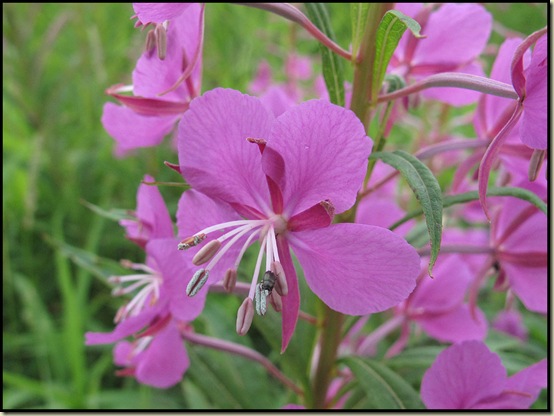 Other flowers included vetches, thistles, St John’s wort, ragworts, buddleia, and more.
Emerging from the forest, we headed beside a section of the old bed of the River Irwell that is still full of running water and home to resident swans and ducks.   The river has been incorporated into the Ship Canal, but the Boat House still stands, and, since we were not on a ‘hard core’ LDWA outing, Reg permitted a brief halt for refreshments.  It was a hot day, after all.  Several known addicts would have been unable to walk past the pub anyway.
A little further on, not far from the route of Part 3 of the trail, hordes of workers were busy constructing the City of Salford Stadium, which I understand will shortly be home to ‘Salford City Reds’, a rugby team. 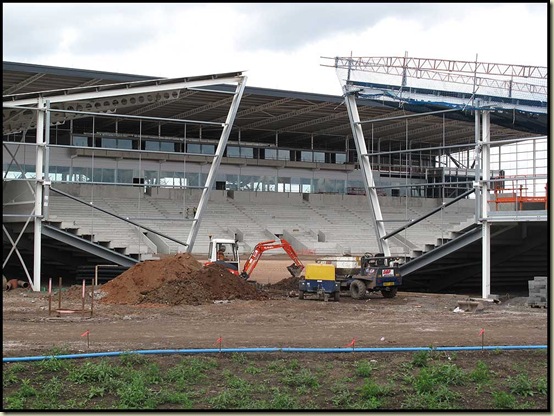 Then we passed under the giant arches of the M60 motorway bridge over the Ship Canal.  It’s rather uglier than the viaducts of the Victorian age, and the graffiti writers must have either very long ladders or a Spiderman kit. 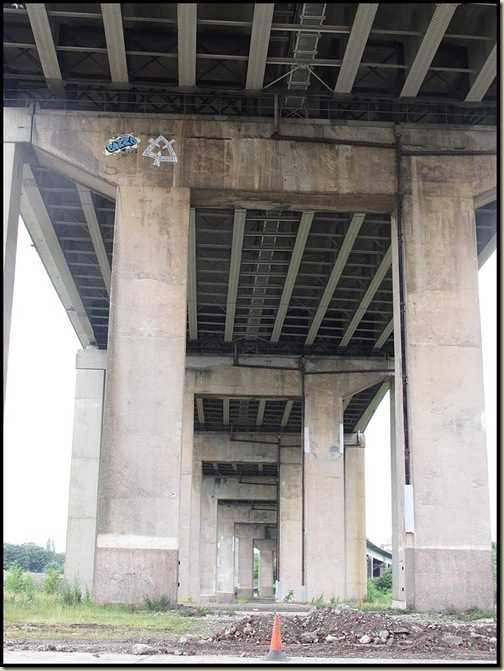 At Barton upon Irwell, where there’s now little evidence of the Irwell, we passed a fish and chip shop reputedly used by Laurel and Hardy when they were in town.  It has changed hands since then. 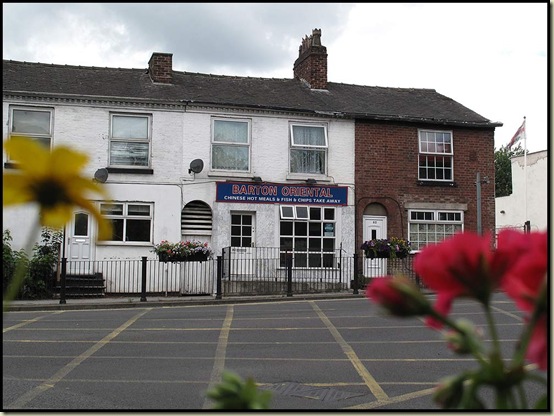 Across the road, beyond a rather grotty area with a bench where we enjoyed a second lunch and a second instalment of fudge brownies, a swing bridge carries the Bridgewater Canal over the Ship Canal, and indeed over our route, which from here on was on tarmac. 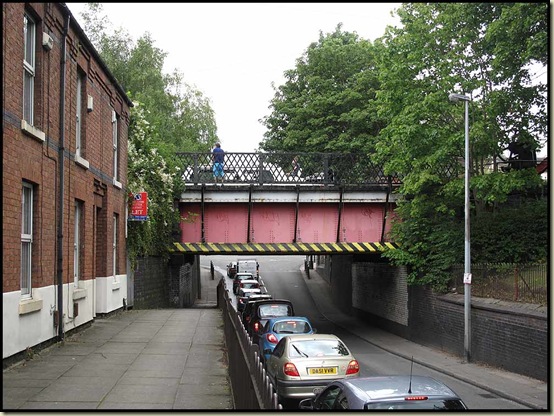 As we strolled on through Eccles, the sky above the International Worship Centre, where we resisted the temptation to call in for refreshments at its café, caught my eye. 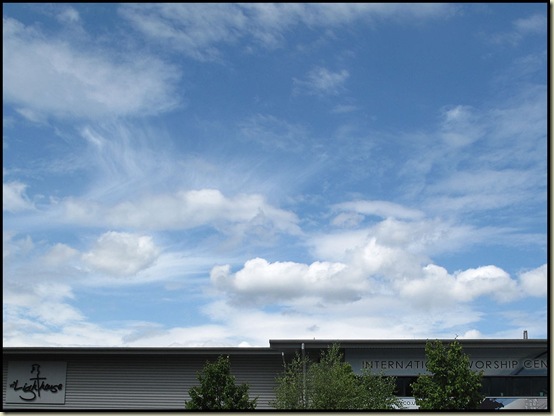 We tramped on through Eccles and into the large area of Salford Quays and its splendid regeneration projects.  It all looks rather smart these days – a far cry from a few years ago.  This isn’t far from the docks I visited to see my cousin Philip when he worked as a merchant seaman in the late ‘60s. 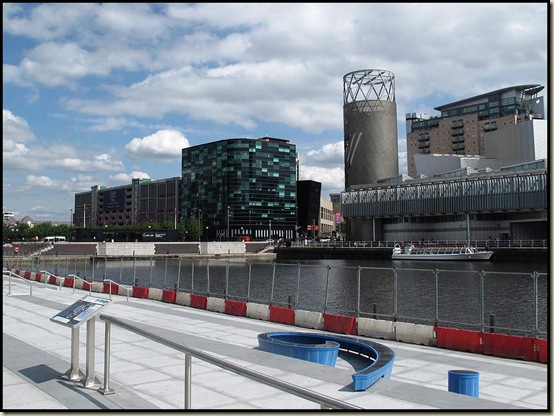 The Imperial War Museum North is well worth a visit if you have time. 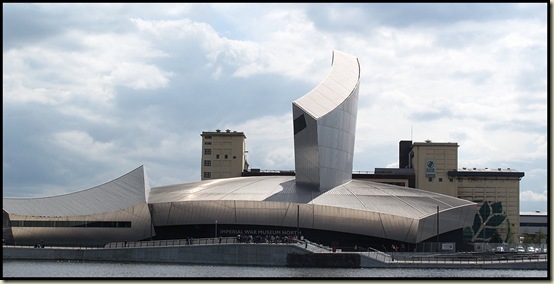 MediaCityUK looks as if it will be a great place to work, with its own Metrolink station, for all those people from the BBC who are complaining about having to be based there! 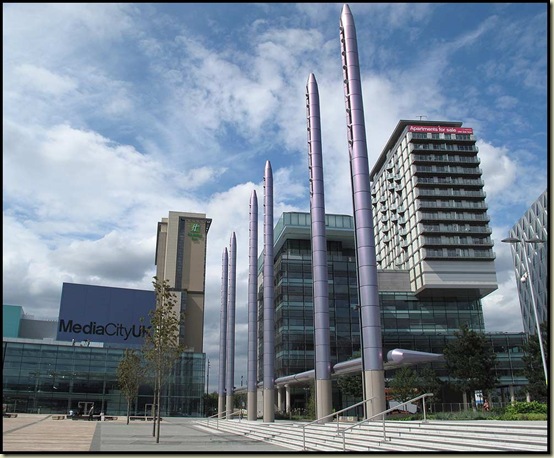 We halted for a while outside the Lowry Centre, full today of graduating students in their finery with their doting parents.  Roy went home, but the rest of us enjoyed a coffee, rather incongruous in our walking gear amongst all the smart suits, before moving on to conclude the walk where it started several months ago, outside Salford Quays Metrolink station.
Here’s the route – 16km with minimal ascent.  It took us all day, but less plodding walkers should take 3 to 4 hours over the interesting route. 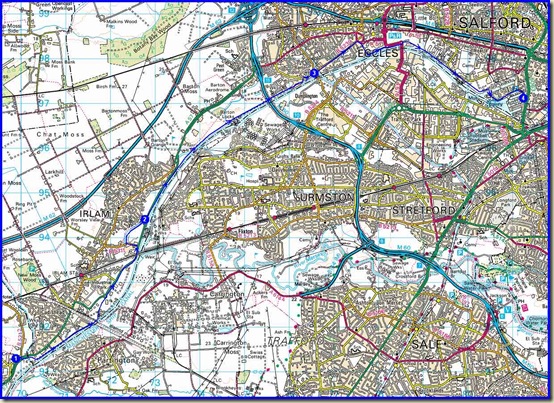 This entry mentions just a few of the many points of interest on this predominantly urban walk.  Whilst country walks have great merit, outings such as this one can be most educational in an entirely different way.
Roy has written about the Salford Trail in great detail here, and Reg has written up today’s outing here.
There’s a bit more information annotated to this slide show.
Roll on the next ‘Plod’.
Posted by Phreerunner at 00:09

Hi Martin,
Sorry i couldn’t make the Thursday, i was looking forward to pt 5.
It all ended up a bit of a mistake with the day. My own fault. It’s an age thing, JJ knows all about that.
Anyway, a few things written there that i didn’t know about my own area!
My mum would argue that Eccles was never part of Salford. All her life Eccles was/should have been autonomous and it was the greatest mistake Eccles ever did when the local council was taken over by Salford. It all went to pot as she would remind us.

If you want a copy of Marge and Steel there is one here.
http://4.bp.blogspot.com/-c8nSFLL6X_I/TbAV6pBZDoI/AAAAAAAADb8/AODV40Bf0D0/s1600/DSC04836.JPG
Although it isn’t not brilliant.

Alan, it was a shame you couldn't make it. We had a good day in perfect weather.
I bet your mum enjoyed the occasional cake, then?
I did put a link in the text to a photo of Marge and Steel, and clearly Roy's website's text (which I borrowed) was itself borrowed from the image, as the words look familiar!

Ah yes, must have over shot the link to Marge. It is a better photo than mine.

My mum was related to one of the first Eccles cake vendors,it was on her mothers side. Now the plot thickens.
If i remember rightly the Birch’s or the Bradshaws or both went into business on Church St selling the things. My mum was related to the Bradshaws. We have a photo somewhere of the old shop.
(The names maybe wrong so don’t hold me to them).

Don't worry, Alan, I won't hold you to them!
I find the history of the Ship Canal interesting, though it's not 'embedded', so every time I go there I have to re-read about it.
Funny how the 'urban' walks can take much longer to write up than the countryside ones, which can have much less by way of historical interest.

Great stuff - have sent this to my mate who is Leader of Salford Council! And a walker!