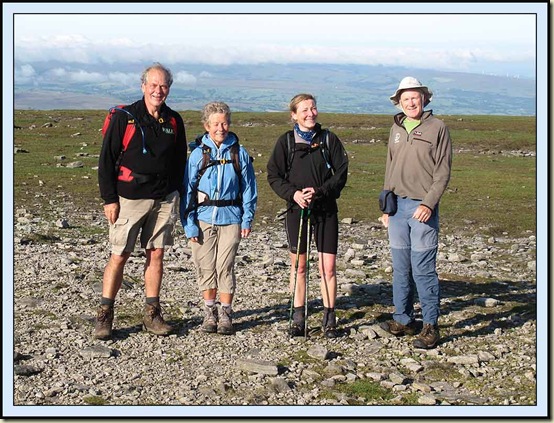 The idea had been mooted during our recent Dales High Way trip, when Roger and Jacky had shown enthusiasm for a brisk stroll over the Yorkshire Three Peaks, should I be returning to walk that route.

Heather, who features in the annals of TGO Challenge reports, also lives nearby and was happy to get to the Hill Inn for 6.30 am on this sunny Sunday morning.

Well, it was sunny once the mist had dispersed, and Ingleborough stood fresh and clear ahead of us. 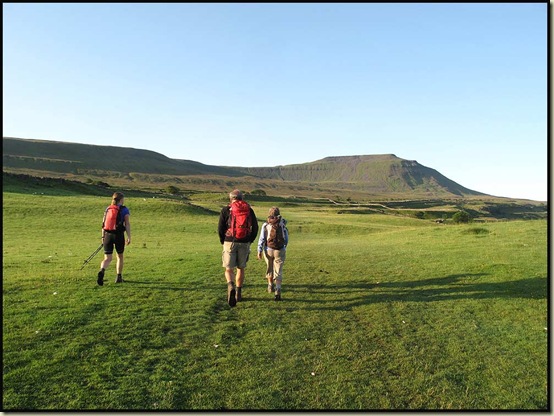 Low mist clung to the Lake District fells and lingered in Morecambe Bay, but this was the finest walking weather imaginable, and it took little more than an hour to reach our first objective. 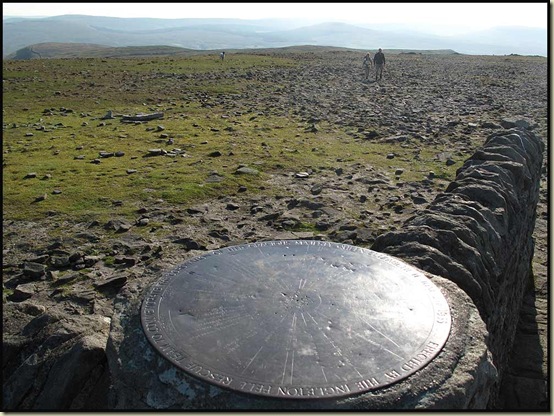 After posing for the group photo at the head of this posting, we ambled back down to the Sulber Nick path to Horton.  Jacky decided that the pace was a bit faster than she would like, so opted to break away and amble back to Giggleswick in her own time.

The three of us weren’t really striding out, but a reasonable pace was maintained down to Horton in Ribblesdale, where we passed the smart railway station and the cafe from where many folk start this walk as a ‘challenge’.

The campsite was busy, and we joined a stream of people going up Pen-y-ghent. 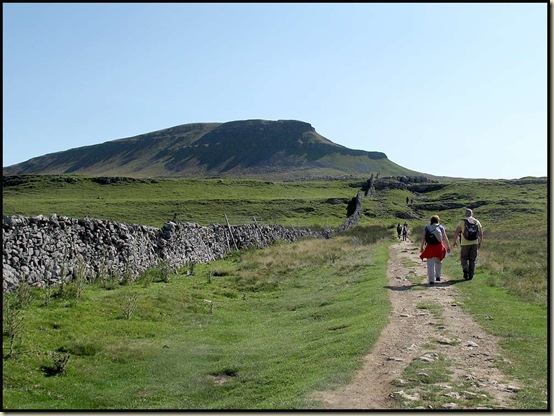 The summit, reached at 10.30, was busy, and it was annoying to watch people ignore the well surfaced path in favour of an older, more direct, route that clearly was recovering from heavy erosion.

Whilst others headed across the boggy depths of Horton Moor and Black Dubb Moss, Heather led us down a ‘yellow brick road’ and over Whitber Hill, where a faint path avoids (in this dry weather) the bogs that are normally a feature of the long plod between Pen-y-ghent and Ingleborough. 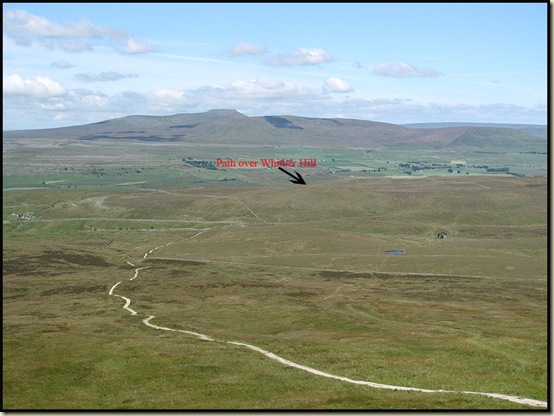 I notice that September’s excellent, if rather early, TGO magazine includes a report that a grant of £30,000 has been awarded to the ‘Three Peaks Project’ by the European Outdoor Conservation Association, for work on ‘restoration’ of this section of the Three Peaks Challenge route that sees the boots of over 250,000 people every year.  Subject to landowners’ agreement, it may be our route over Whitber Hill that receives the benefit, rather than the traditional route through the bog.

Today we encountered very little by way of dampness underfoot, though Heather did manage to spread-eagle herself on the path at one point.  It’s a shame it wasn’t boggy just there, as a softer landing may not have resulted in the long graze that she now sports, matching one that Roger acquired earlier in the week.

Beyond High Birkwith and Nether Lodge, we reached a convenient lump of concrete beside the infant River Ribble.  Time for some lunch. 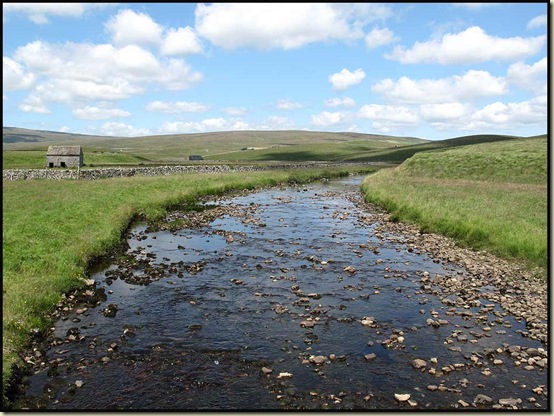 The short road section to Ribblehead was a bit tedious due to heavy traffic and motorbikes, but on arrival at Ribblehead we were rewarded with the evocative sight of a steam locomotive making its way across the famous viaduct. 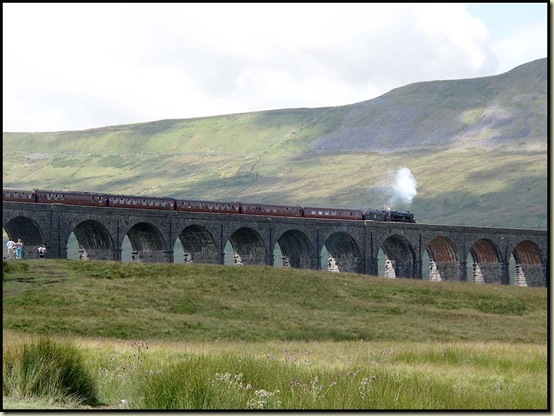 The tea van was doing a roaring trade, and whilst Roger and I tucked into welcome 99’s, Heather burnt her throat on a cup of tea.

The path up Whernside passes near the viaduct.  Roger pointed out some metal plaques – one is shown below – which seem to be appearing on the finger posts hereabouts, some bearing no apparent relevance to their location.  From where are they emanating, we wondered? 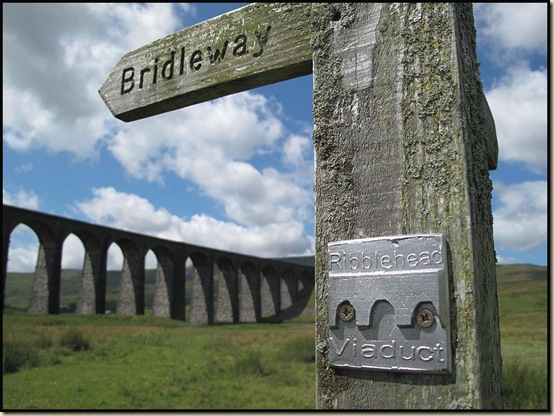 The ascent of Whernside took a little longer than expected.  Our pace was beginning to slacken.  But it was still early, and there was no hurry, apart from Heather having to do some baking for a Jamboree (or similar?).

There was still no risk of rain, as Roger made it to the top. We lingered on Whernside’s summit, enjoying the vista, before ambling down to Chapel-le-Dale, eschewing the various establishments that were offering refreshments in favour of beer and tea with Jacky back in Giggleswick.

We had finished at 4.20, completing the 39km (24 mile) circuit in 9 hours 40 minutes.  Not particularly fast, but a lovely walk on a perfect day in excellent company.

Thanks for joining me, folks. 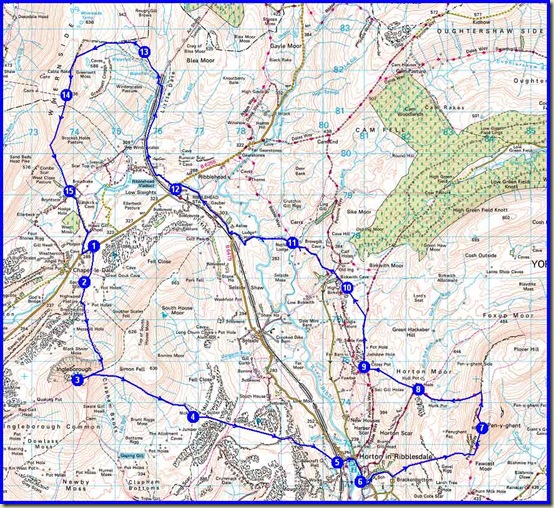 Here’s the ‘actual’ route recorded by my Garmin Gadget:

And here (click here) is the 34 image slideshow of all my pictures from the day.

Days in the Yorkshire Dales don’t come any better than this….

Nice walk (YOMP?) Martin.
I need to get back into some hills.
Well, I will once I get rid of this B^&**( cold from my daughter.
I just finished recovery from the Hernia Op, was about to start training again and now Cough wheeze splutter.
But I am inspired by your photo's to get up some hills soon.

Just a sec - you arrive at a pub at 6.30 in the morning (when it's closed) and then set off on a 24 mile walk? Poor planning sir, very poor planning.

Pleeease tell me that you imbibed a few when you got back (god forbid that it had been open from mid morning and was closed again by 4.30!).

Oh, forgot to say, looked like a thoroughly good day out :-)

A thoroughly excellent day out indeed, and far from a YOMP, it being entirely on good paths, with no bog or excessive speed involved.
Whilst it's true to say, Phil, that we eschewed the delights of the Hill Inn at the end, it was only a few minutes drive to Giggleswick, where Jacky was waiting with beer etc and delicious home made cake.

Were they those delicious fudge like cakes?
They were weren't they DOH!,/b>

Actually, Andrew, we had eaten most of the brownies during the walk, and Jacky makes delicious cake, so we ate lots of that in a Giggleswick garden.

What a lovely day out! A good picture of the train.

A splendid report! I missed this one as that was when I was moving house, so it's nice to catch up on it.

The problems with the erosion of the paths are obviously exacerbated by poor weather and wet subsoils, so you were indeed fortunate to find it firm and on such a lovely day.

Your own walk provided a welcome reminder of this excellent day out, Alan. As you know, I do try to choose good weather for my outings. Usually!

Starting from the Hill Inn and taking the 'alternative route' meant that we saw very few people other than at Ribblehead.