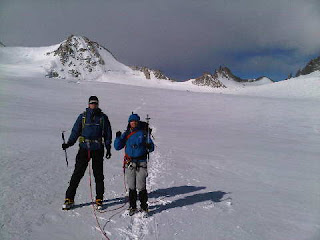 We got an early night last night, due to today's 'Alpine Start' - breakfast at 5am, leave at 6am. The weather was dry, but cloudy above about 3500 metres.

Soon after starting out, beyond a rocky section, the glacier was reached. We have two 'ropes'. Dave leads the first rope, with Tony, Grant and Michael, whilst I bring up the rear with Andy and Donovan, on the Red Rope.

Soon after we started cramponing up the glacier we turned to admire the sun rising over the Aiguilles Rouges, back across the Chamonix valley. A miscellany of 'ropes' no doubt paused to do the same. There were lots of people on the Glacier du Tour this morning.

Many groups were heading up local summits by way of training for an ascent of Mont Blanc later in the week. Our first objective, Col superior du Tour, at around 3300 metres, coincided with theirs. Magnificent views across the Plateau du Trient greeted us after the easy rock scramble to the col. Here we left the 'ascendeurs' and followed 'Dangerous' Dave's tracks across the glacier.

In fact, Dave's glacier skills meant that the most danger we were in was from tripping up on our own crampons as we turned our attention to the wonderful vistas displayed before us.

Today's picture shows Donovan and Andy on the plateau, with our entry col over to the right.

More care was needed as we entered a crevassed area on the Glacier d'Orny below the Cabane du Trient - perched on a rocky spur at 3170 metres, overlooking the plateau. That refuge was originally our planned destination for tonight, but Dave had wisely judged that day to be too short - we would have reached the Cabane at around 10.30am.

So we continued on to exit the glacier at 10am, after four hours of being roped up, beside a mountain path leading to Cabane d'Orny.

The hot chocolates were good but at SF6/€6 rather pricey. Anyway, we enjoyed a pleasant sojourn there before continuing for a couple of hours down the excellent mountain path to the Breya chairlift, passing through a band of cloud on the way.

A few spots of rain did little to spoil the walk before we arrived at the chairlift at 13.45, just as it reopened after lunch.

By 2.30 we were down in the pretty village of Champex, where we quickly installed ourselves in the comfortable Gite Plein Air that Sue will remember from our Tour of Mont Blanc in 2000 and others will recall from a Walkers Haute Route trip in 2006.

Plenty of time for a few beers then...

Well - It's good to hear that you worked for your refreshments, today.

They don't have to sell many hot chocolates to make a living, do they?

Seems a very early start considering the finish time.
So i now understand now the need to test the boots out in the early hours.
€6 for chocolate! And i thought Norway was expensive.

Wow, look at all that snow!

With hot choccy that expensive, it'd prolly be cheaper to have a beer :)

I bivvied by Albert Premier once (2002 I reckon) and then took the same col you did prior to an ascent of the Aiguille du Tour and yes - we were training for a crack at Mont Blanc later in the week.
Am enjoyed this second-hand visit to the Alps in lieu of anything more concrete!