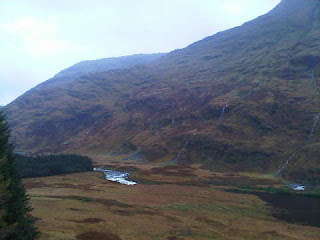 The above picture was taken from the lay-by in Glen Etive at NN 149 495, when Graham (Brookes) and I arrived there at 10.30 this morning. It was about the best view that we had during our ascent of the Corbett, Beinn Maol Chaluim.

I'll add a few more pictures in due course. Few being the operative word. The new Canon G12 wouldn't have been used today, even if I had remembered to pack a memory card for it. The 'wet weather' camera was one of very few items that remained dry.

The rain was persistent and at times heavy, but it wasn't cold. Just as well! We both finished up pretty wet. Graham expected leaks. I didn't. The waterproofs that didn't let in a drop of water during this year's TGO Challenge allowed it to pour in during today's four hour escapade.

We did have views up to about 750 metres, but whilst the cloud wasn't down the sight of lashing rain weren't entirely inspiring.

The walk, however, was easy and satisfying - a steep haul NNW up to a pleasant ridge, at the far (NW) end of which we enjoyed lunch at the twin cairned summit during a lull in the rain that enabled the lunch tent to remain in my rucksack, which performed well on its first outing.

Our descent by the same route could accurately be described as 'WET'.

Now we are back at the Alexandra Hotel here in Fort William, where a horde of legendary and not so legendary TGO Challengers, is looking forward to an evening of fun.

Will anyone remember anything about it??
Posted by Phreerunner at 16:50

Sounds like you had a good, if wet, walk; it certainly looks nice on the map! Hope the TGOC reunion is good; as you've no doubt noticed we haven't made it up there this year (perhaps we'll make it to the Snake in March...)