“Any walks planned in this neck of the woods in the near future?” pinged a text message from Heather, who lives in the Yorkshire Dales.

There were no plans, but that was no hindrance to my setting off on Monday morning to Long Preston, and thence to Stainforth to the start of a stroll up Fountains Fell.  I’d forgotten my wallet, so Heather had to pay for the parking (sorry, Heather).

It was a lovely fresh autumnal morning as we headed out of the village and up to Catrigg Force, which was gushing pleasantly, but was difficult to photograph in the contrasty light. 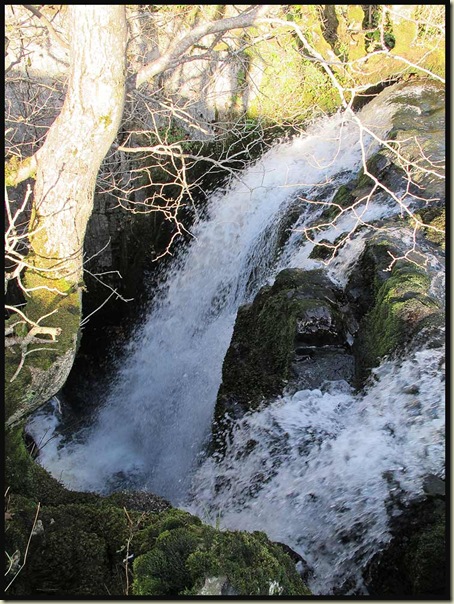 There’s a fine view of Pen-y-ghent from above the Force. 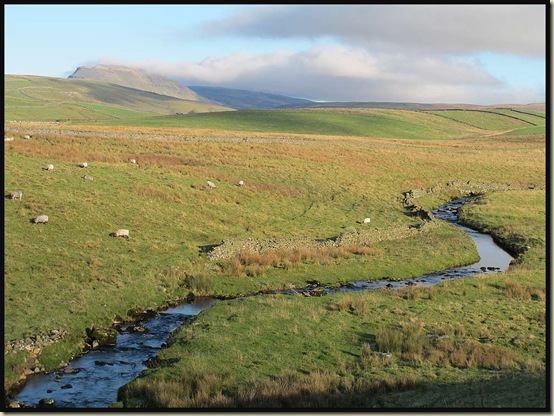 Today, Heather was eagle-eyed when it came to spotting Waxcap mushrooms.  The one below is a Scarlet hooded Waxcap, and we she found larger specimens of Crimson Waxcaps and Meadow Waxcaps.  Apparently most Waxcaps are edible and it appears that Heather may have vast quantities stashed in her freezer. 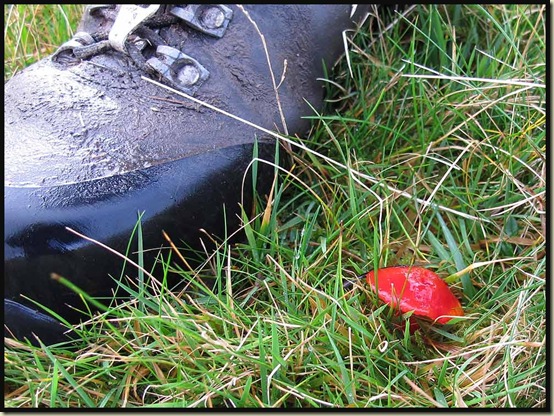 We reached the trig point at 593 metres in good spirits, before the cloud immersed us. 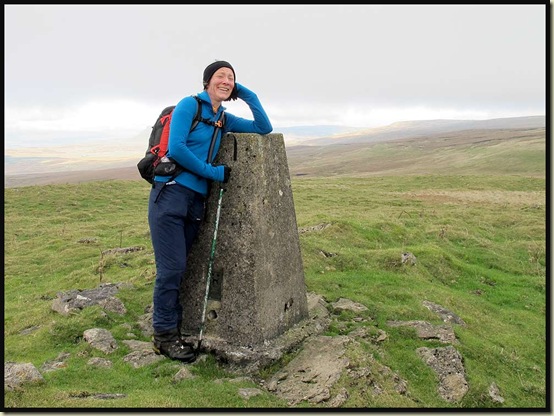 Navigation to the summit of Fountains Fell proved quite straightforward, as Heather is an expert mountain leader (ML).  She passed her ML Assessment a couple of weeks ago – not an easy task – and should be congratulated for that.  Congratulations, Heather.

Meanwhile between the trig point and the summit, my map, a scratty piece of A4 paper, had accidentally blown away.  I had no spare.  Luckily, Heather had her own rather more secure version. 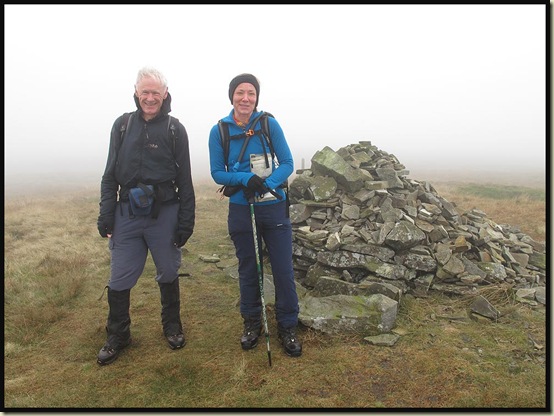 We met Lionel and Susan Bidwell on the summit of Fountains Fell.  They were ‘bagging’ summits – Lionel is Munroist number 4584 and has climbed about 480 ‘Marilyns’ - hills with a 150 metre prominence relative to their surroundings.  He is striving to extricate himself from the ‘Corridor of Obscurity’ to the ‘Hall of Fame’ that conquerors of 600 or more Marilyns are eligible for membership.

I have to thank Heather for getting us to that summit, as following the loss of my map I discovered that my compass (yes, I had one!) had reversed its polarity, sending me south when I thought I was going north.  I had a trusty Garmin GPS in reserve, of course.  Its batteries turned out to be flat.

We bade our farewells to the Bidwells and trundled off along the Pennine Way on the route shown below, passing Dale Head Farm, which surprised Heather by the absence of its usual pack of baying hounds.

Lunch was taken at this delightful spot beside Churn Milk Hole.  Well, most of lunch was ‘taken’ – it transpired that I’d left half of mine on the kitchen table at home. 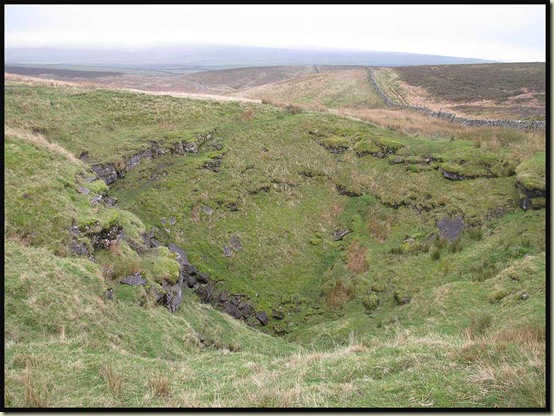 By now the cloud had completely taken over and this morning’s crisp brightness had deteriorated into a cold greyness.  That didn’t stop Heather pausing to identify several more Waxcaps, admiring their virtues as culinary delights. 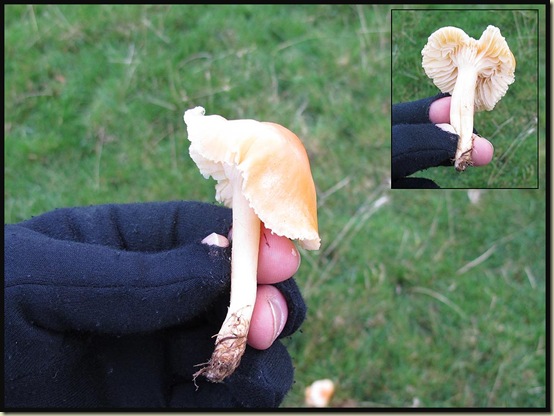 I don’t recall them being quite that corrosive!

Then suddenly she bolted off towards Stainforth, in search of refreshments. 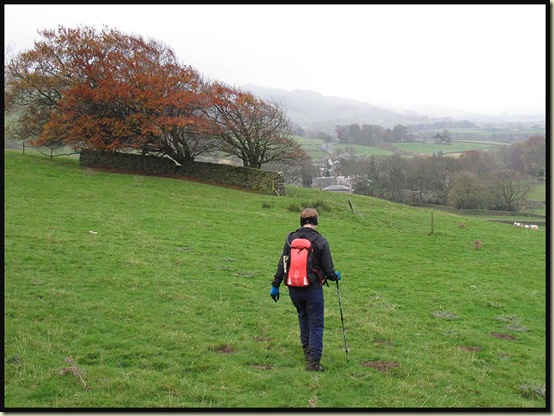 What an excellent day out.  21km, with 570 metres ascent, in 5.5 hours.  The route is shown below and a short slideshow is here. 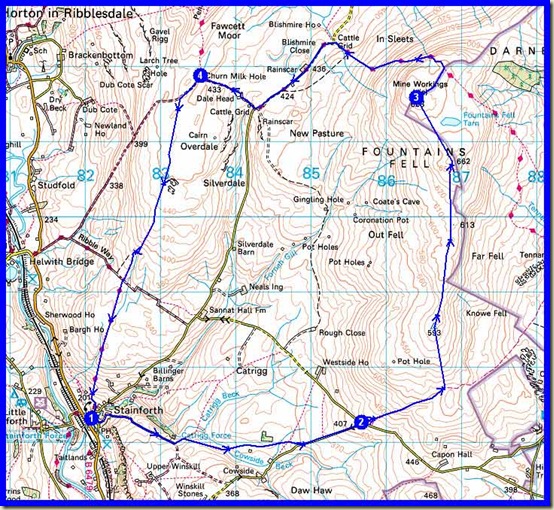 No map.
No Compass.
No GPS.
No Sandwiches.

Apart from the sandwiches bit, that sounds like a good walk, to me.

That Heather's a smashing girl. She dragged me up Pen-y-Ghent once...

Such a relief to know even the best of us can have 'that' sort of a day.
Mine are a bit too often for comfort...
Gave me a good giggle to read, sounds a great route.

Thanks you two. Luckily the more expert member of our team looked after me, and supplementary provisions were found.

Next time I may consider 'packing' the night before an early start!

It's a suprise that you are let out of the house to be honest.

Fountains fells is a cracking hill, although those mine shafts on the summit always give me the willies.

I don't get out much, actually, James. It's such a struggle to find the front door, and when I do it's usually locked.

The mine shafts didn't bother me at all. Ignorance was bliss in the mist! For the benefit of other readers, here's what I've just discovered about them:

"Coke was much lighter to transport than coal and had fewer impurities which would affect the quality of any metal smelted using it as fuel so it was much in demand in the dales. An unusual beehive coke oven survives high up on Fountains Fell in a coalmining field that was founded around 1807 by Lord Ribblesdale. It was built to provide fuel for the Malham calamine industry but after 1815 the coke was also used for smelting lead on Malham Moor. The oven is built of roughly coursed sandstone rubble and measures about 4 metres square and 2 metres at its highest. Inside, the oven consists of a hemispherical dome though now the top had subsided. This dome gives it the name ‘beehive’. The entrance to the oven is formed by an arched opening. A complex of trackways survives throughout the colliery connecting the shafts to the coke oven and providing access to the mine. It is not clear how long the oven and colliery remained in use although in 1830, work was still being undertaken."
Source:
White, Robert (2002) The Yorkshire Dales. A Landscape Through Time. Ilkley: Great Northern Books

Hi Martin,
Good job you had a qualified ML on this challenge otherwise who knows where you would have ended up.

I was always told don’t eat “Mushrooms” if they have fins underneath. Obviously this is not true.

Thats a cracking picture of the waterfall and particularly with the shadow on the opposite side.

Thanks for the pics etc - a great day out! Just a note about waxcaps: Crimson Waxcaps, Meadow Waxcaps and Scarlet Hoods are all good for the dinner table and I have enjoyed with white wine, garlic and cream on tagliatelle, fried up on toast and in spicy Thai broths BUT there are many in the waxcap family that, although not considered poisonous, are considered inedible/not recommended or the edibility is unknown - so correctly identify what you're picking before you indulge!! Unfortunately the specimens here were generally quite old and had been spoilt by frost.

Thanks for those wise words, Heather.

So Martin, as I understand it, not only did you forget your wallet, lose your map, have a dodgy compass & GPS AND leave part of your lunch at home, but you've also got holey gloves!!!

That's hilarious - good job you had a qualified minder!

PS Thanks for the entertainment!