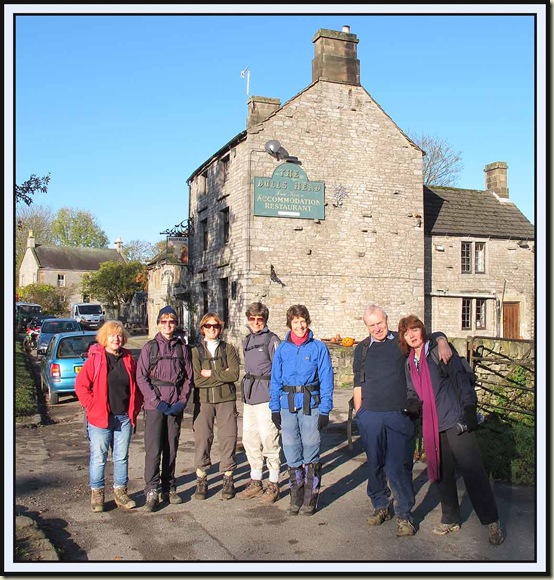 On a lovely sunny morning, Sue and I popped out to the White Peak for a day out with a few friends who were staying at 'The Barn' (Limestone Cottages).

I’d planned a route, in line with a specific request.  It was rejected on the grounds of potentially muddy fields and a ‘boring’ section of disused railway.  So I reverted to familiar ground and the motley crew set off in the opposite direction to that planned, from outside The Bulls Head.

We soon missed the path beside the church that provides a link with the Limestone Way.  I was distracted by the sunlight in the foliage… 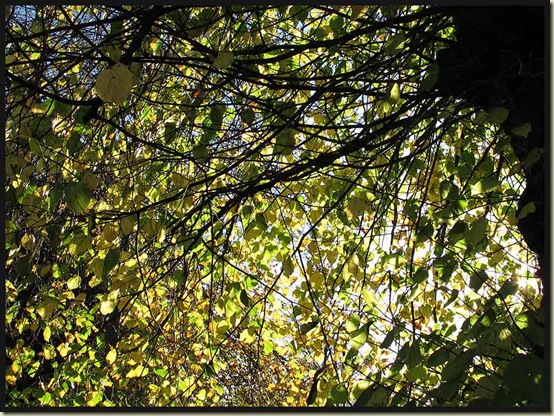 Anyway, it was easy to retrace our steps (nobody seemed to complain), pass the church and cross fields, to join the Limestone Way, which was followed all the way to Youlgreave.

There were lovely views across the White Peak from the path which pottered along to reach One Ash Grange Farm, where we expected to enjoy a chat with the pigs which live in houses beside the path and are usually very talkative.

Unfortunately, the pigs appeared to have been baconised, but we were befriended by Donald, who needed a cuddle! 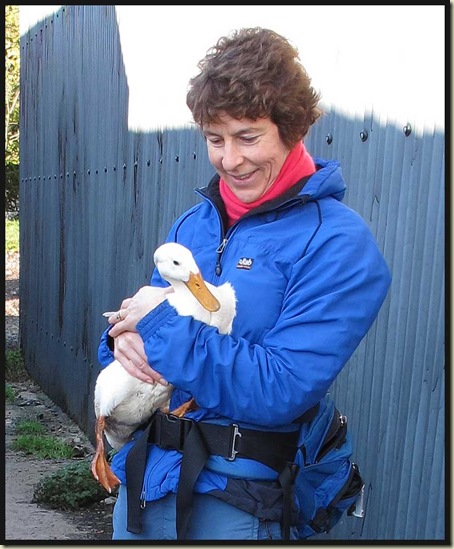 After a slithery descent into Cales Dale and a steep pull out of the dale past a huge group of ramblers, we proceeded towards a bench near Lomberdale that Sue E had recced for an elevenses break.

Sadly the bench was surrounded by another huge group of 30+ ramblers, so we moved on to enjoy a cuppa in the shade of a fine old tree. 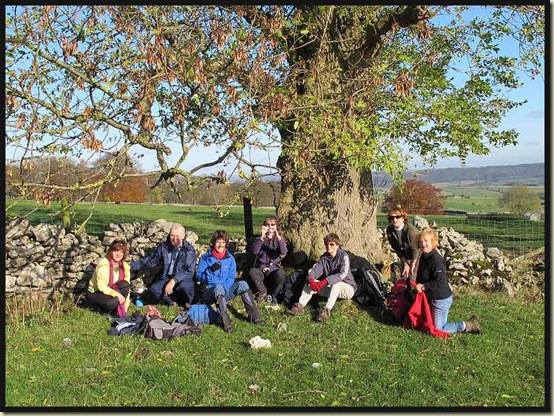 I think the remaining leaves are ready to drop, but calm weather is prolonging our enjoyment of the season’s colourful foliage. 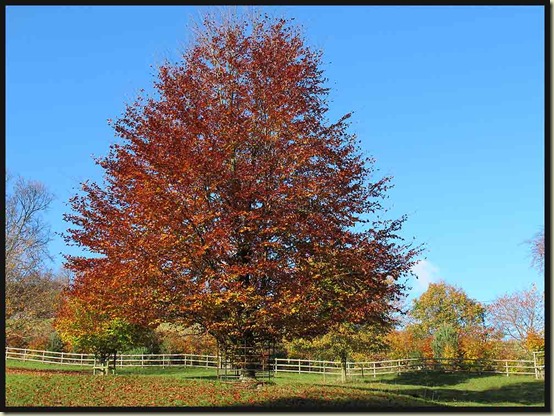 Soon we were down in the valley, marching beside what remains of the River Bradford.  The river is a little low in places - it's a limestone area that has been heavily mined, so drainage is maybe too good.  There are normally trout in the river, but none were spotted today, and the bird life – coots, moorhens, etc – was shyer than usual.  At one point the river has been dredged to form a pool suitable for bathing, but that was a shallow mud bath today.

Our path skirted below Youlgreave and entered Lathkill Dale below Alport.  We strolled along the west bank, with stomachs rumbling, re-crossing the river at the mediaeval Conksbury Bridge, beyond which there’s an excellent spot for lunch.

We were joined for lunch by a couple of mallard, but the coots that nest just here were on their holidays today.  Further up the dale a swan was hoovering the weeds, and dabchicks were popping up and down from the river bed, but there was no sign of the usual dippers and heron.  We passed a series of weirs, indicating that there was once a mill near here, and in places, as in Bradford Dale, the river is dammed to form ponds for the fish.

As the sun dipped below the high sides of the dale, we were cooled by the sharp change in temperature.  Over Haddon leered at us from its sunny hill top position. 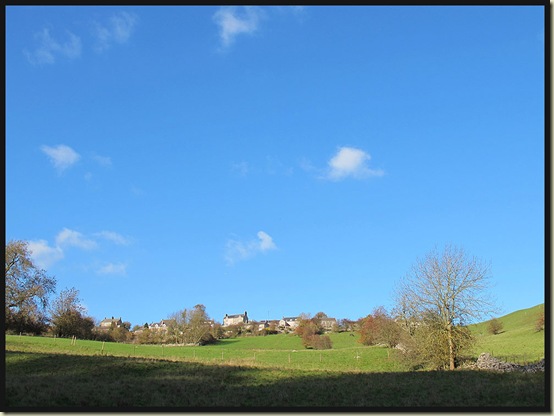 ‘Caves’ and drainage channels at intervals along the dale provided a reminder of lead mining activities in days past.  The section of the dale between Over Haddon and Cales Dale was once home to several very profitable lead mines, of which the most important was the Mandale Mine, which was worked from the 13th century until operations finally ceased in 1851, defeated by water problems.

By 2.30 the sun was already low, and by the time we re-emerged from the dale and returned to Monyash via Bagshaw Dale the departing orb was casting a golden glow on the Bulls Head. 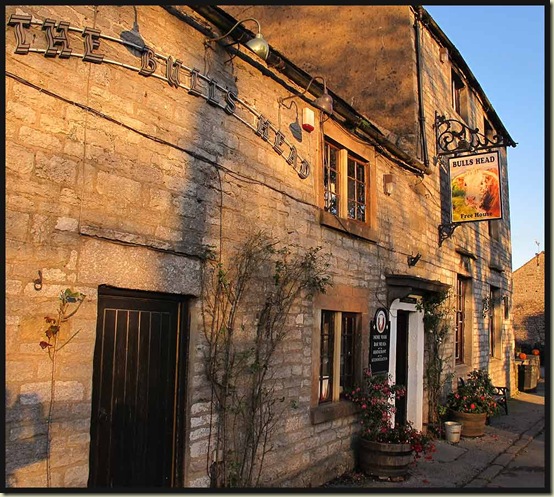 Here’s the route of this 20km walk with about 300 metres ascent: 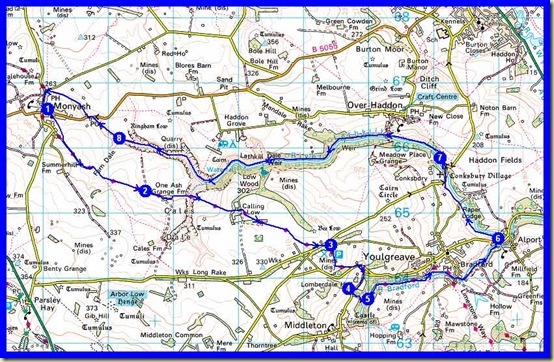 It was 3.30 – too early for the pub, but before returning home to cook Sunday dinner Sue and I found plenty of time to enjoy tea and cake in the barn.  And Jacqui's birthday party was joyously celebrated. 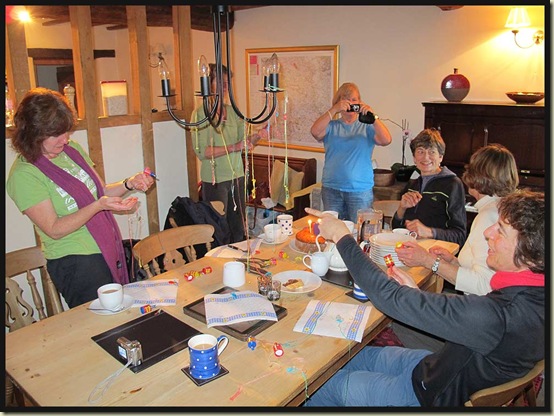 Happy Birthday Jacqui, and thank you everyone for a most enjoyable day out.

Principally for those who were there, there’s a slideshow (40+) – the first pictures taken with my new Canon G12 camera – click here.

I've done this circuit myself a few times. Lovely!

Anyway, just thought I'd pop by and say "Hi". I picked up your blog via Northern Pies, but I think I may have spotted you swing by mine a few days back.

I'll have a better look through in the coming days.