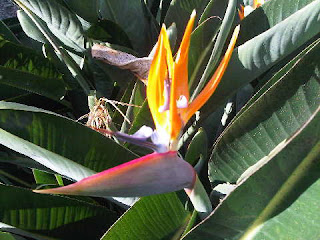 Today was spent 'swanning' around Funchal, with visits to the cathedral, the market, an assortment of churches, the ochre Fort de São Tiago*, and the President's Garden.

The 'bird of paradise' is Madeira's national flower. We saw lot of them today, but only one swan, hanging from a noose in the art gallery. The blue and gold Macaws in the President's Garden (isn't he kind to allow visitors to rampage amongst his shrubs?) were much more lively - boisterously enjoying life in their huge cage.

We were back at our luxury pad just in time to win the afternoon quiz. Thanks mainly to Gayle's planetarium sized brain.

Curiously, we appear to have walked at least 11km on this 'rest day in town'.

* The fort was built in 1614 to defend the city from pirates. Later, during the Napoleonic wars it became an extremely cramped billet for 3500 British troops who wanted to ensure the French didn't take the island. In 1803 it was used to house thousands of local people made homeless by devastating floods. Now it houses, inter alia, a strangled denim swan.

More snippets of historical and other interest will in due course accompany a slideshow of this trip to Paradise.
Posted by Phreerunner at 18:06

Sorry if you get this message too many times, I still have no news here and it is unbearable!

Here i am Brain the size of a planet and they ask me to take them down to the bridge. Call that job satisfaction!
Marvin the paranoid android.
Just seemed apt.
Sounds like you are having a good time although there is far too much coffee being drunk.

Fingers crossed for the chally entry.

TGOC 2012. Martin and Sue - you're on the list. I Don't know Mick and Gayle's swcond name but there is a Mick and Gayle mentioned.

Hope this puts you out of your misery!

Thanks Gibson. You were the first to tell us (almost).