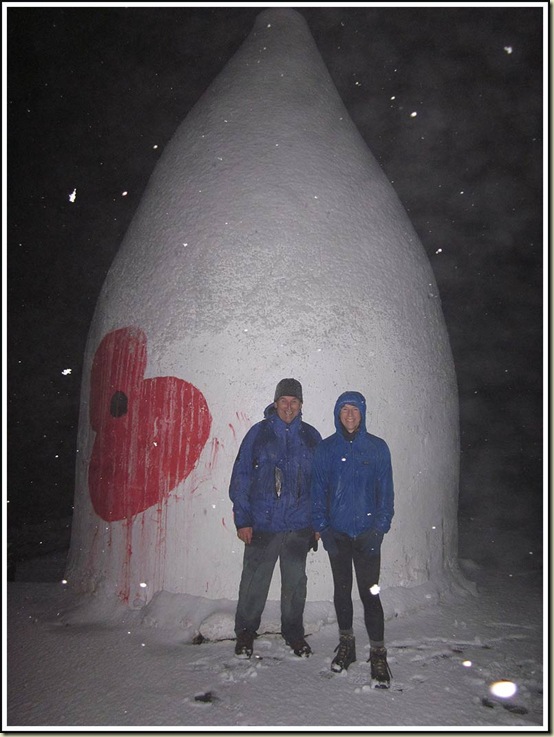 “I’ve never been up to White Nancy” remarked Andrew as we strolled along the Saddle of Kerridge last night.  This was as good an opportunity as any for his first visit, though the views weren’t as good as we’d expected.

We had met as arranged in the Vale Inn, which has transformed itself in recent times to a most acceptable establishment with fine ale that has travelled all of a few feet from the in-house brewery.

Our journey from Manchester had been under a full moon, as the day’s showery weather had moved to the north, or so we thought.  We were expecting a chilly but fine outing – after strolling a couple of kilometres down the Macclesfield Canal, we were to ascend Kerridge Hill for a potter along the Saddle to White Nancy, before descending steep steps to what used to be the Redway Tavern (now a private house) and back to the Vale through the streets of Bollington.

As we supped our fine ale we noticed a change in the colour of the clothing of new customers to the pub.  Everyone was dressed in white!  On closer inspection, everything outside had turned white, and they were just bringing it in with them.

Unperturbed, even though one of our party had failed to bring  weatherproof clothing, we embarked on our stroll.  We didn’t see the full moon as we spent the entire duration of this 8 km, 2 hour walk, in a blizzard.  It was surprisingly enjoyable.  Our first taste of winter.

Eventually we turned up at White Nancy, next to which Sue and Andrew are pictured above.  I could refer you to Wikipedia, but I’ll save you the ‘click’ and tell you about White Nancy here.

The structure was built in 1817 by John Gaskell junior of North End Farm to commemorate the victory at the Battle of Waterloo.  It originally had an entrance to a single room which was furnished with stone benches and a central round stone table, but the entrance is now blocked. It has been described as a summer house or a folly.

In the mid-1940s, the Royal Signal Corps Trials Unit based at Catterick would apparently drive a truck-mounted dish-shaped transmitter/receiver up to White Nancy, where they tested cathode-ray tube transmission and reception (data-based, not images), to a mobile receiving station on another truck. The receiver would be driven further and further south over time, until eventually the lads at White Nancy were sending a signal to the south coast of the country. Locals told the signalers that the landmark was named after the lead horse that had transported all the materials for the building of the folly.

According to the Wikipedia entry, White Nancy was unpainted until at least 1925, since when it has been painted in a number of different colours over the years, most commonly in white. In 2005 vandals painted it partly in pink. In March 2009 it was repainted in white with the ball finial in black.  As you can see from the picture, it now sports a large poppy – that was certainly not there when we visited the spot on 10 November 2010.

Just in case you are interested, here’s our approximate route – we (I) cocked up at the end, by taking two sides of a triangle: 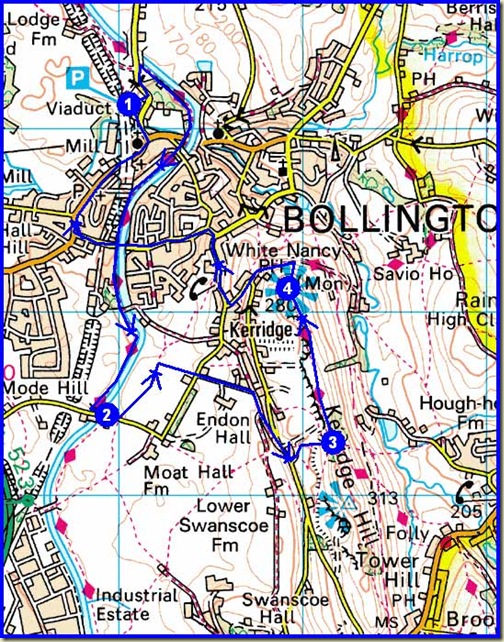 Never mind, we were pretty wet by then anyway…

Enjoyed that! So, I wonder why they blocked up the entrance?

and... what were you wearing then?

I can't find why they blocked the entrance, Alan - probably a counter dosser campaign or something.

I was the only one in full waterproofs. Andrew had soggy trousers and Sue was completely drenched - her 'Vapour Rise' top isn't waterproof...