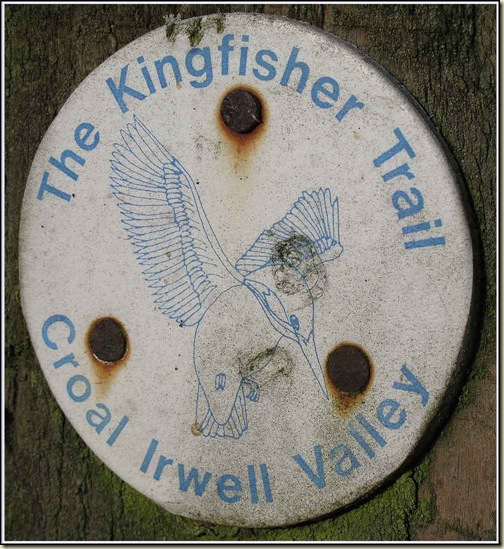 On a lovely sunny autumn morning, seven plodders and Maude embarked on a ten mile amble from Clifton Country Park, near Kearsley, to Jumbles Country Park, beyond Bromley Cross.

I’d arrived with half an hour to spare, as had Don.  But Don’s day changed with a call from his wife, who had dropped him off.  “Broken down” “on the hard shoulder near Middleton….”

Luckily, David had arrived and the small group of Plodders were happy to wait in the sunshine for me to return from reuniting Don with his wife, only about ten minutes late.  Sadly Don missed out on a good day out, but was able to conclude a much needed rescue, and the repair to a loose alternator connection soon restored the Micra to good health.

From Clifton Country Park a pleasant path leads to this Tower in Ringley... 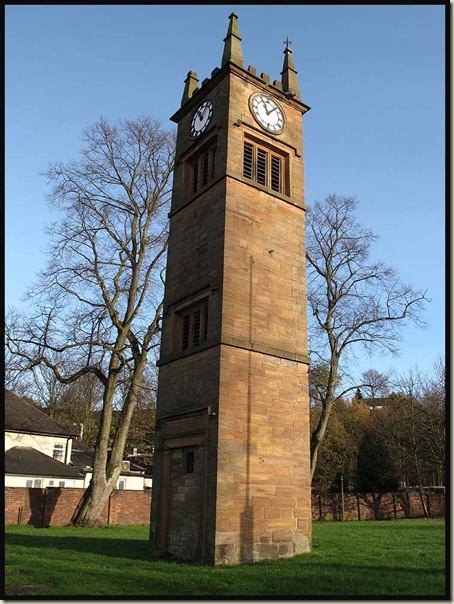 Nathan Walworth was instrumental in the building of the first chapel at Ringley which was completed in 1625.  This tower effectively commemorates that chapel, by way of a partial restoration in 1854, when a new church was built, which itself was renovated in 1907.  There’s some fascinating information about the long history of Ringley here.

Nearby, across an ancient bridge over the River Irwell, La Roma seemed an interesting looking place, but Reg (our leader) took one look and ran off in the opposite direction.  “I thought I saw a ghost!” he later admitted. 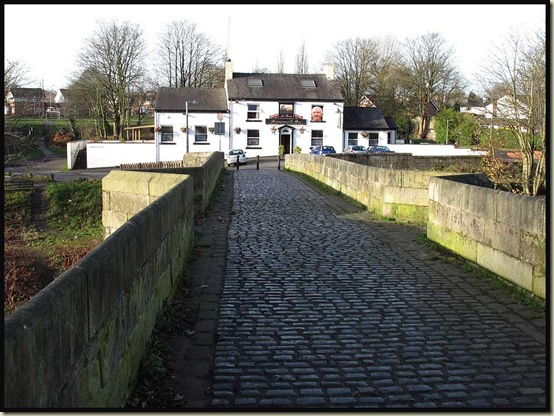 The Manchester, Bury & Bolton Canal, built between 1791 and 1808, has now largely been abandoned, but the water remains in this scenic section at Prestolee. 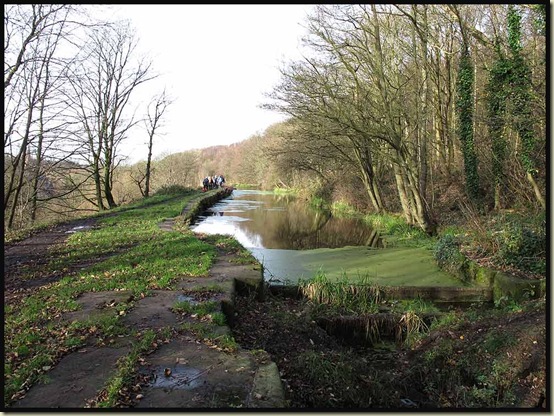 David, a founder 'Plodder' who is only rarely able to join us these days due to family commitments, posed in the sunshine beside a complex junction of waterways involving the Croal, the Irwell, and the canal. 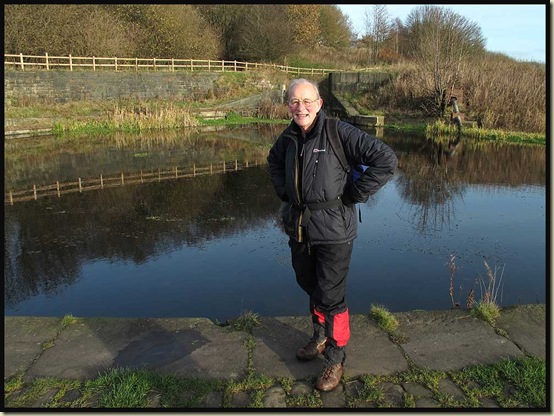 Soon we had left the Irwell and were heading on beside the River Croal.  Our northerly route passed beside waterways to the east of the major conurbation of Bolton.  We weren’t alert enough to spot any kingfishers, but dippers swooped up and down the Croal, and a heron fished beside Bagshaw Brook'.

There are several Country Parks along this trail.  We seemed to pass almost seamlessly from Clifton Country Park to Moses Gate Country Park, with Darcy Lever Gravel Pits, then ‘Seven Acres’ and Leverhulme Park – the site of a popular parkrun – before finally reaching Ousel Nest Meadows at the edge of Jumbles Country Park.

We passed some sculptures - it's a shame I didn't capture this one in 3-D. 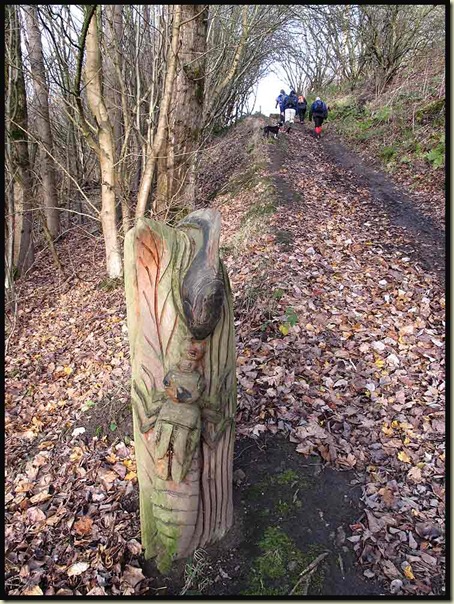 The giant frog of Darcy Lever pointed its jaw towards a hostelry (of a name I cannot recall!) where five of us enjoyed a brief respite from the blinding sunshine.  The beer/coffee was excellent.  It wasn’t a dog friendly establishment however, so Vi and Hilary had to stay outside with Maude, soaking in the rays. 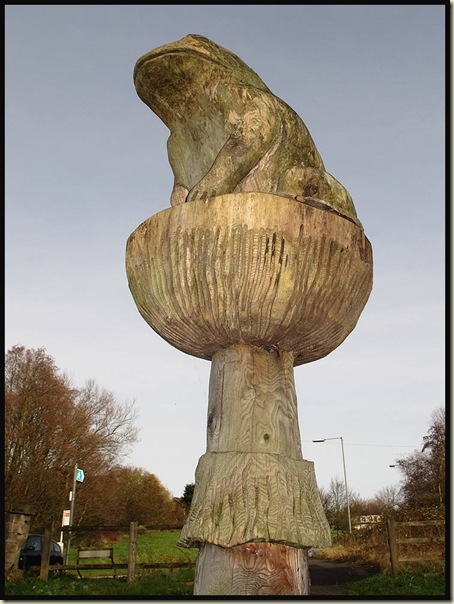 Wobbling off again, we passed under a high viaduct that didn’t seem to be linked to anything.  It wasn’t.  It was virtually all that remains of one of the many disused railway lines in the area.

We continued along a muddy path through Seven Acres Country Park, beside the River Croal.  All of a sudden, the sun had gone.  Everything assumed the monochrome of a late November afternoon.  I tested the ‘vivid’ setting on my new Canon G12 camera, with acceptable results on this occasion. 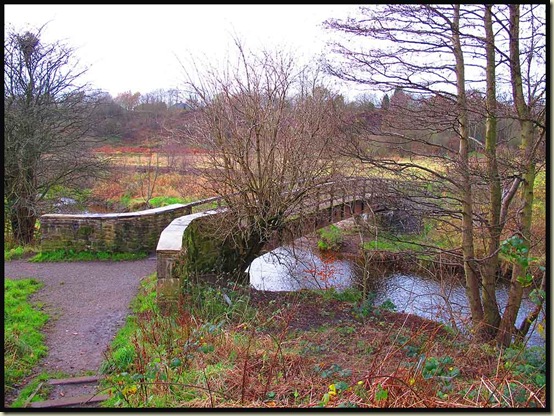 The riverside path led steeply up to enter Leverhulme Park.

Reg claimed a momentary loss of memory concerning the route.  I think he was just enjoying a rest! 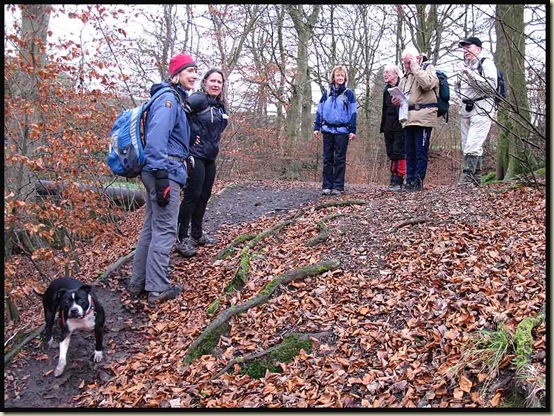 Heading on through Leverhulme Park, the venue for a popular parkrun, we finally found some benches on which to enjoy lunch.  The only trouble was that they were 150 metres apart.  Nevertheless, I commuted to ‘the posh bench’ after a while in order to lighten my load.  Fudge brownies always seem to go down well with this lot.

The trail now pottered along beside Bradshaw Brook – in truth a pretty hearty river, criss-crossed by water pipes and inhabited by herons.  No sign of any kingfishers.

The 16 km (10 mile) route stayed resolutely off-road, despite the fact that we were walking through an industrial heartland of the north west.

We admired the Jacobean Porch that is the sole remnant of Bradshaw Hall, home of the Bradshaw family from C12 to C18.  Later occupants, the Lomaxes and the Hardcastles, developed bleachworks here, but the old stone seems now to have been converted into housing. 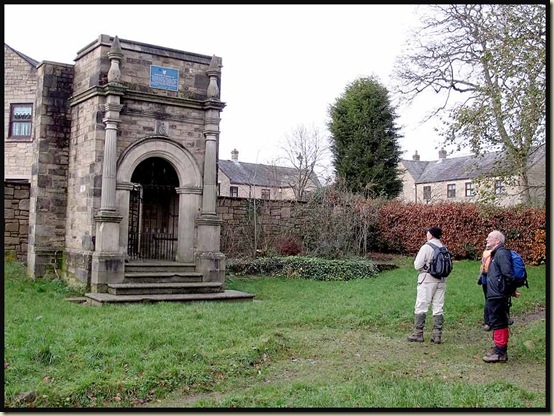 The last lap to Jumbles Reservoir took us along paths typical of the day, disused (by traffic) riverside routes of railways and tracks to the east of Bolton. 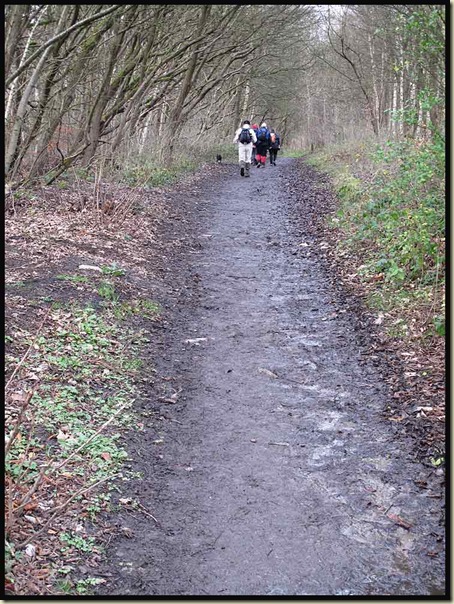 The party separated below the dam that was built as recently as 1971 to contain the waters of Bradshaw Brook in Jumbles Reservoir, as buses and trains from different places were needed to get us to our respective homes.

Before leaving the site of the dam, leader Reg, as always clued up on historical information and industrial archaeology, related the story of local opposition to this project in the 1960’s.  He hastened away after telling us about the ‘Jumbles Ghost’ – the apparition of a local protestor that sometimes appears on the stepping stones.

I set my new camera to the ‘ghost’ setting, shut my eyes, pressed the shutter, and ran after Reg, afraid to look at the resulting snapshot until I got home and downloaded it. 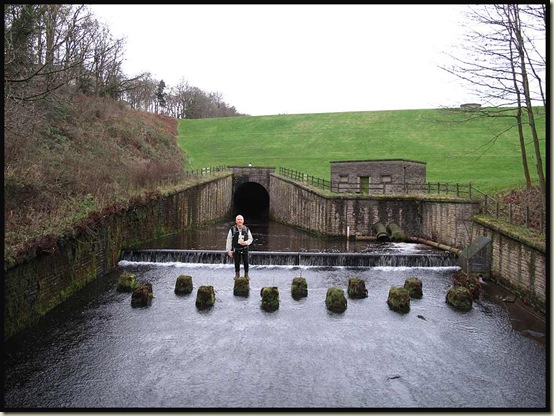 The remnants of our now disparate group took tail through some blackbird meadows and headed home via Bromley Cross and Bolton, where the number 8 bus ‘plodded’ through traffic to return me to Clifton Country Park some time after dark.

Reg’s excellent report (with more historical titbits), together with photos from Hilary, are here. 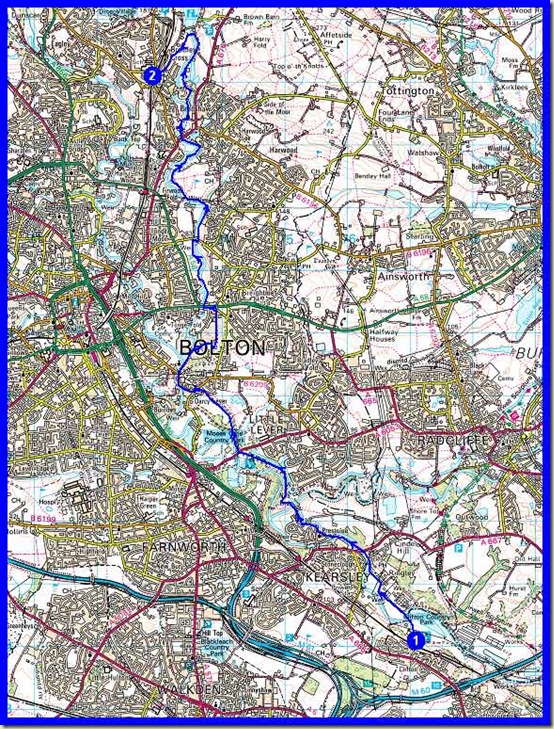 My Garmin Gadget recorded the route shown below (I still haven’t worked out how to overlay it onto an Ordnance Survey map).

It can be quite amazing sometimes just what you can find amongst the relics industrial revolution.