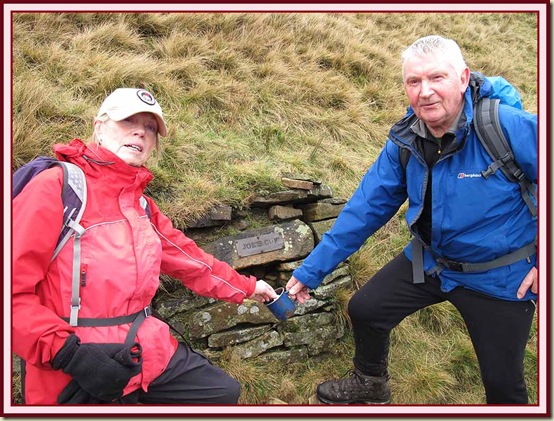 The old enemy (time) has delayed the write up of my continuing perambulation along the Lancashire Trail with East Lancs LDWA group.  I’ll write about that next week, but here’s a highlight from Wednesday’s ‘plod’.

On the moor above the quintessential English village of White Coppice, stands the ruin of Drinkwaters Farm.  Norman claims to have known the old farmer – he probably hastened the poor man to an early grave!  The farm was so named because of a nearby spring which still flows, rather gently, just below the path from the summit of Great Hill.

Joe, a member of Wigan Phoenix,  was one of Lancashire’s true fell running characters well known for his ultra-distance runs over these moors. The spring at Drinkwaters was used regularly by Joe and his companions on Sunday morning runs.  The February 1992 Fellrunner magazine contained an obituary where it was observed

“Joe Whitter was one of those essential characters that make fell running what it is. The Anglezarke Moors will be a poorer place without him and he will be sadly missed. Typically, Joe requested his ashes be scattered on the moors he loved, and there are many fell runners who will now be unable to run past Drinkwaters on Great Hill without remembering him.”

Norman seems now to have taken over custodial duties in relation to the cup, which is now used to collect small donations – here Anne is doing just that, making a donation.  With my money!  I’m sure it’ll go to a good cause.

Much of the text for this posting was taken from Ian Charters’ excellent running blog – here – I do hope Ian doesn’t mind.

I’m heading north for the weekend in a few minutes, so will be back next week with a fuller report on Wednesday’s walk from Rivington to Abbey Village.

Thanks Martin we will do our utmost.

No problem Cheryl, you may use this however you like.
Martin