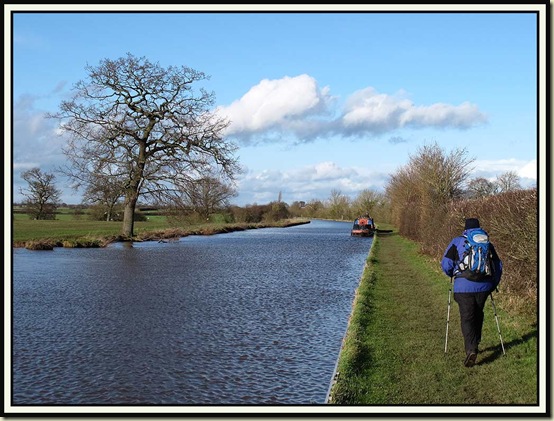 Dave and I had planned this little excursion over some Christmas jollities, and our plans actually came to fruition, with Andrew joining us for a short stroll alongside a canal.

The 12.05pm 'number 73' from Nantwich bus station took about 25 minutes to deliver us to St James' Church in Audlem. Outside the Gothic church, which dates from around 1278, is a pillared buttermarket, built in 1733, next to which is a 'bear stone', to which a bear was chained whilst men paid fees for their dogs to bait it. 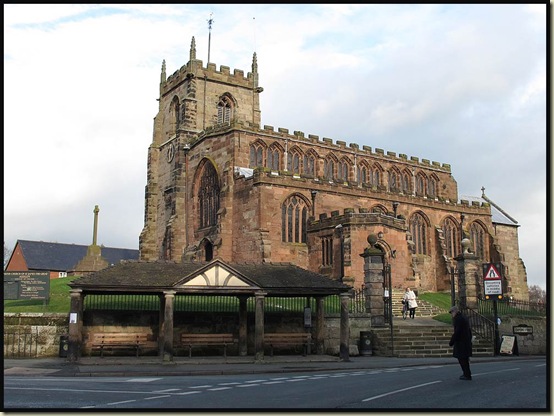 There are plenty of pubs in Audlem.  Today we chose the Shroppie Fly, a former granary warehouse that has only relatively recently been converted into a pub.  The bar is made out of the original Shroppie Fly – a grain carrying barge that used to work the canal.  A log fire roared in the middle of the lounge.  Good ale, and bacon and egg butties, prepared us for the cool but bright weather outside, but we were still reluctant to venture from the cosy warmth…

The large crane outside the pub is a relic from the past – it was used for loading and unloading, involving the canal and a now defunct railway.  In days past a cheese boat sailed to Manchester; every Saturday morning local farmers would cart their cheeses down here for loading. 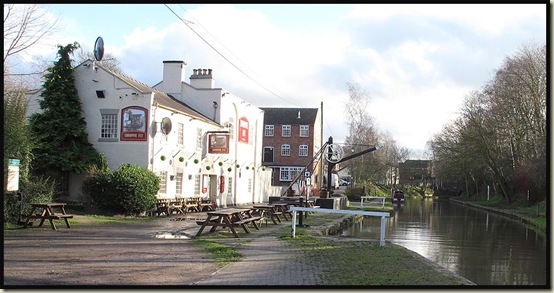 Lock 13, just outside the pub, is the lowest of a flight of locks that descends into Audlem from the south, ensuring good business for Audlem's hostelries, and especially this one.

Today’s stroll was basically just along the towpath, in a northerly direction to Nantwich.  The sun was on our backs, casting long shadows.  Beyond Moss Hall – a timber-framed manor house dating from C17 - clear views to the north east on this cool January day drew the eye as far as the western edges of the Peak District. 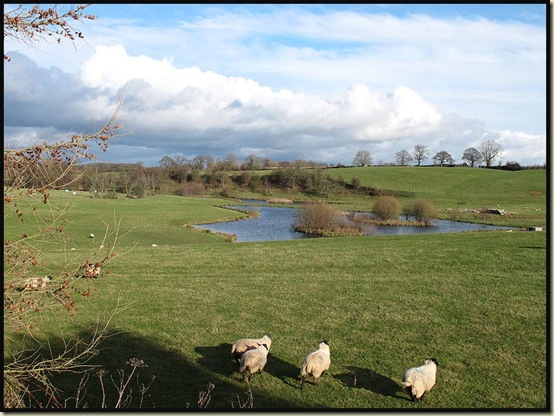 A Thomas Telford aqueduct sees the canal over the River Weaver, far below, with an information board disclosing a few of the birds you can expect to spot hereabouts.  Today there were large groups of Canada Geese, mallards, moorhens, kestrel, sparrowhawk, mute swans, rooks, crows, wood pigeons, starlings, numerous hedgerow birds, and back in Nantwich the brief sighting of an unmistakable Little Grebe or ‘Dabchick’.

A new marina has opened on the west bank of the canal.  Lots of boats are clearly stored there for the winter, and some were being lovingly maintained/restored as we passed by.  Further on, this lone tree, home to a few rooks or carrion crows, caught my eye. 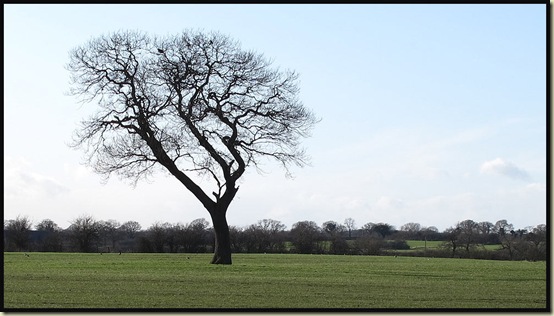 Milestones are judiciously placed to nudge travellers along their way…

At the height of the canal era, fast ‘fly-boats’ would speed along here, between Birmingham and Ellesmere Port, carrying up to 25 tons of goods such as butter, cheese, ham and grain from the farming communities, and coal, timber and limestone from industrial centres.  To make the journey as fast as possible they travelled through the night, with the aid of huge oil lamps. 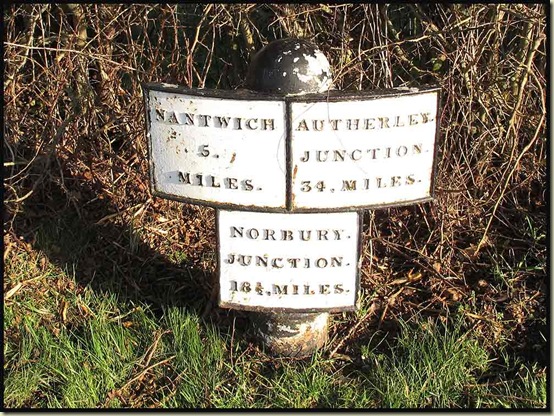 The Shropshire Union Canal Society has provided frequent facilities for 'cruisers' – on this stretch there’s a whole series of picnic benches with frames for disposable BBQs - making no doubt for a leisurely and convivial summer's evening scene. 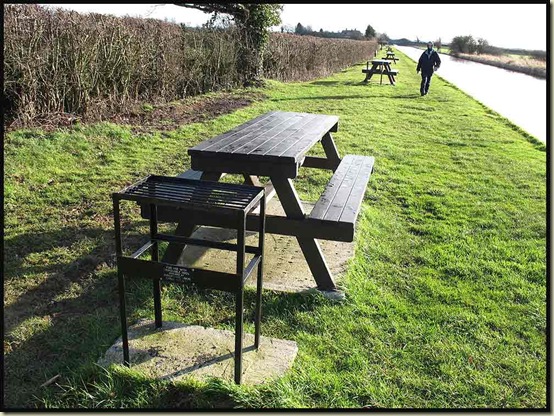 Half way along our walk we encountered a top secret diversion. It was a difficult job, but after some debate we cracked the code and successfully worked out the secret hieroglyphic that pointed us towards the ‘bunker’. 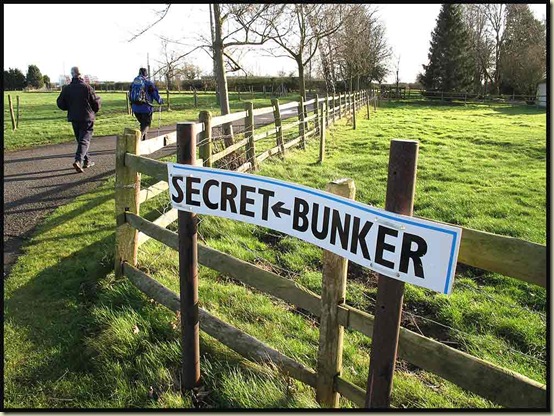 Sadly, the location (see map below) is so secret that people only seem to be able to find the place at weekends during the winter months.  It was locked up and we were unable to spy on any secret goings on.  The Secret Bunker would however provide an interesting diversion should this walk be attempted at a weekend or in the summer.  The website is quite fun in itself!

Soon we were back beside the canal, heading towards Nantwich again and passing under the railway before taking a right turn away from the canal.

Arriving at a pedestrian crossing, in the absence of a lollipop man a decision was made not to attempt to cross in front of the traffic.

A pleasant stroll through the market town of Nantwich, where St Mary's Church is known by some as the 'Cathedral of South Cheshire' returned us to our cars, judiciously placed in a leafy suburb next to a welcoming tea shop (aka chez Dave and Maggi). 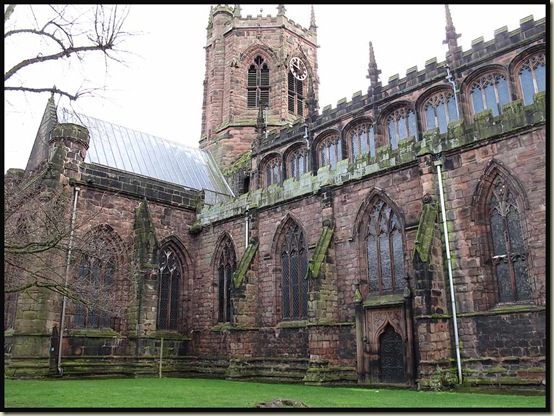 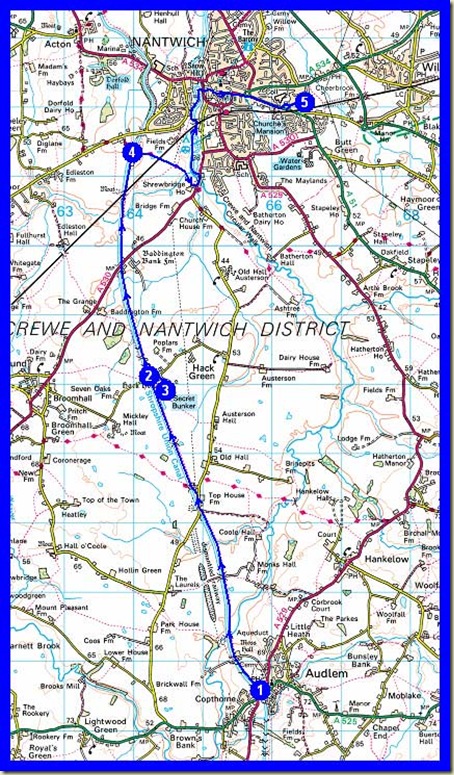 Very enjoyable too – here’s a slideshow with some of the same text and a few more images.

I've walked from Wolverhampton station to Gnosall with the dog, and thoroughly enjoyed it (unfortunately, the dog hated it), and have been trying to fit another one in.

Thanks 'Glassback, your comment is appreciated. There are some lovely parts of Cheshire and Shropshire.

Looks like a great stroll, I'm currently recovering from a knee op and a canal meander sounds like a perfect way to get out and about!

Nice day for it!

We've got one of those secret bunkers near us, whose whereabouts is also only revealed after the decryption of a sphisticated code of Turing-like complexity where - and thhis is the clever bit - the letters actually stand for what they are. Genius! Of some sort, anyway .... ;-)