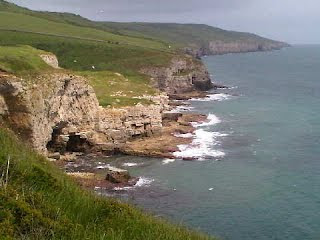 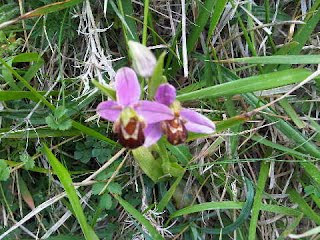 Today we managed somehow to deposit some cars at Durlstone Head, then our friendly local taxi got 15 of us (numbers having been swelled by the arrival of Nelia and Jonathan) back to Gaulter Gap for about 10.30.

Gaynor, perhaps distracted by yesterday's memory of prostrating herself in front of a pirate, missed the crocodile and headed off in the wrong direction, but by the time of our CCS stop below Eldon Seat she had caught up and could enjoy the goodies.

Today's weather forecast foretold of steady rain all day. Luckily for us the legendary pessimism of the BBC's forecasters proved to be the case. Not a drop of rain fell on this pleasantly temperate day.

It was a classic 18km section of coastline. A few ups and downs put paid to some of the less fit members, and Liz, Betty and Jonathan soon headed off to a strategically placed car in Kingston.

The rest of us continued on past some warblers - whitethroats I think - to a sheltered spot for lunch in a field to the south of well named Emmett's Hill.

Shortly afterwards, National Coastwatch Institution volunteers provided more tea and cake in return for a small donation, though I suspect that we and they do not approve of the government cuts - minuscule in general terms - which are forcing coastguard operations to rely on charity.

Nearby was a field of poppies and St Aldhelm's Chapel, a unique and fascinating place dating from before the 12th century.

The walk to Dancing Ledge was easy and uneventful apart from a short appearance of the sun. Numerous climbers were enjoying the warm rock on the cliffs above the crashing waves.

As we progressed towards Anvil Point, Sue spotted some Bee Orchids, the first time she has seen them in the UK. Quite a find, although my reference book describes their occurrence as 'frequent, locally common". One of them is pictured above, underneath some cliff scenery typical of today's walk.

Tea and cake at Primrose Cottage was followed by another meal at the New Inn with coffee and chocs back at PC before the long drive home to Norden House.