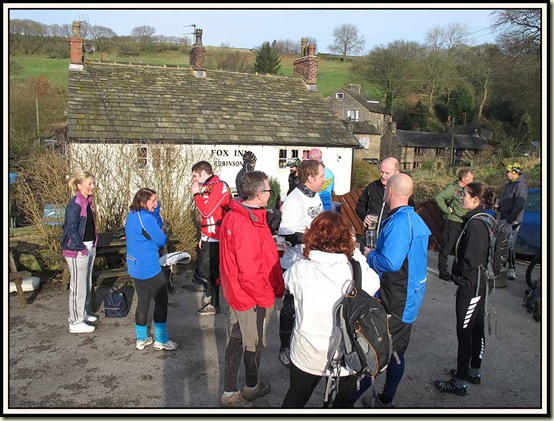 I’ve been a member for nearly a year now, but this was only my third ride with the Manchester Mountain Biker (MMB) Club.  I should join this friendly bunch more often, as these are always very jolly outings.

After nearly crashing into Huw in the car park, I recovered my composure and set off down the Middlewood Way with today’s leader, Steve Brok, in a group of 18, or was it 19 (we never seemed quite sure, but I don’t think anyone was lost), eager punters on a brilliantly sunny morning. 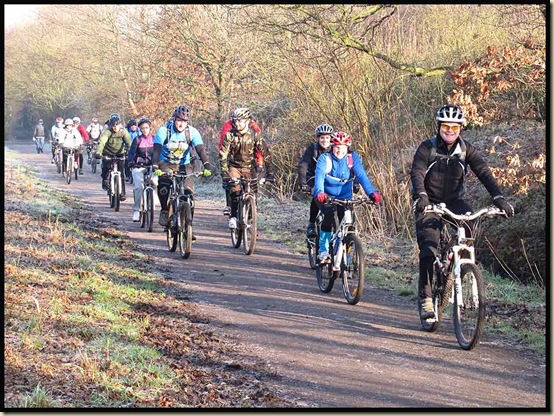 Huw came equipped with the latest breed of slimline mountain bikes, with skinny tyres and no gears.  It reminded me of one of my old bikes, except that it didn’t sport the fixed wheel that kept dumping me over the handlebars of my bike! 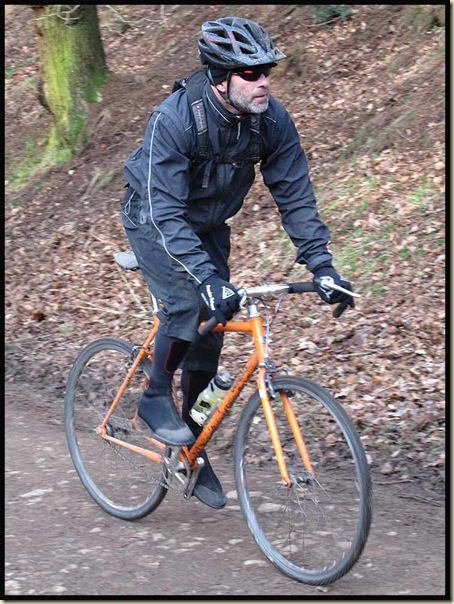 Glaring sunshine on the Middlewood Way gave way to shady tracks leading up from the West Gate of Lyme Park. 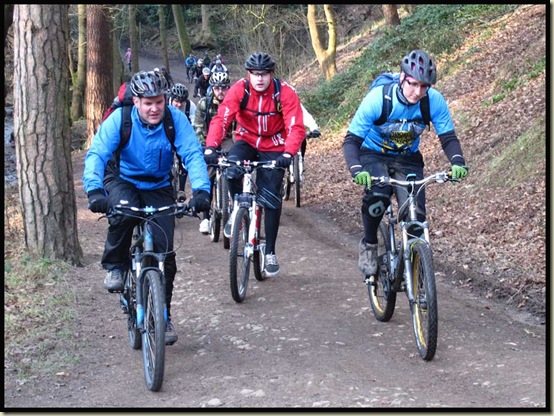 Four of us enjoyed a little excursion to the top of a hillock, whilst the majority regrouped.  Luckily, nobody saw me lose control completely as I flew down the far side of the hillock!

Soon we found ourselves gliding along beside the Peak Forest Canal, trying as always to be courteous to other users of the towpath.  With 18/19 of us that may have been difficult, and I can understand some folk being a bit narked by such a large group of mountain bikers.  However, today’s sunshine brought the best out of everyone and I didn’t hear a single harsh word. 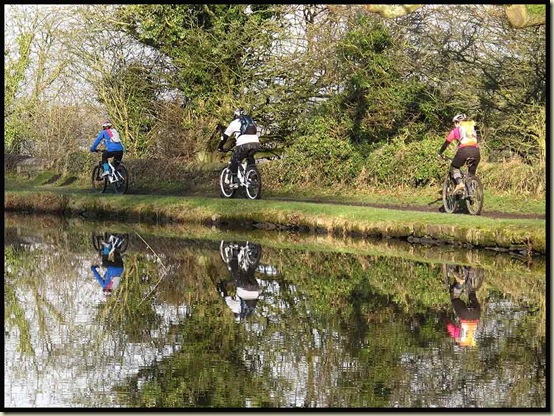 By the time we reached Strines, Steve seemed a bit concerned.  We were dangerously ahead of schedule. "I fancy a beer!" announced George.  I hadn’t even been aware of a ‘schedule’, but nobody seemed to complain about an extra loop being slotted into the ride in order to contrive a visit to the Fox Inn.  Huw disappeared for a while then reappeared at the pub – I think he may have found a different route, and I suspect he walked for a short distance…

The Fox Inn provided an excellent array of refreshments, supplemented by cake a little earlier at the top of the hill, and by chocolate biscuits from a birthday boy.

Until today, all my MMB rides had featured a chap called Keith, who is a quite fanatic mountain biker.  It had been a surprise not to see him on today’s ride, but I believe Keith does like a beer, so it should really have been no surprise to see him put in a guest appearance at our pub stop! 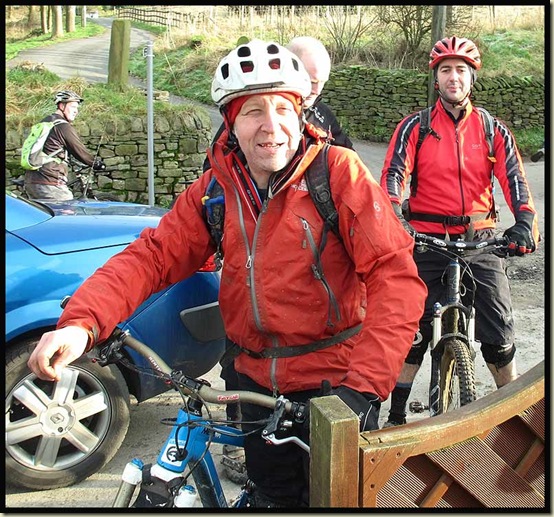 After a while – we’d cooled down a bit outside the pub – Steve decided we might now be a bit behind schedule, and was worrying on behalf of anyone who might be late for their Sunday lunch, so off we flew, down a lovely descent that I think he called the ‘Fox Trail’.  [Personally, I think it was his own lunch (or lack of it) that was worrying him.]

After arriving at Strines for the second time, we headed up to the farm with the old Ford Capri, where I was impressed with the leader’s ability to repair a broken chain in just a few short minutes.

Another easy hill, just near the end of the ride, took us to a carefully arranged mudfest on the otherwise delightful descent of Strawberry Hill, to ensure that everyone went home 'gooey'. 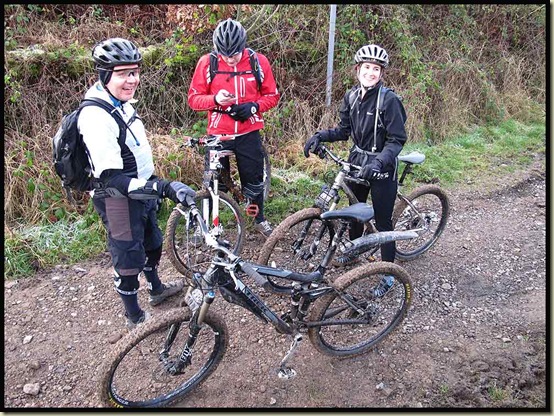 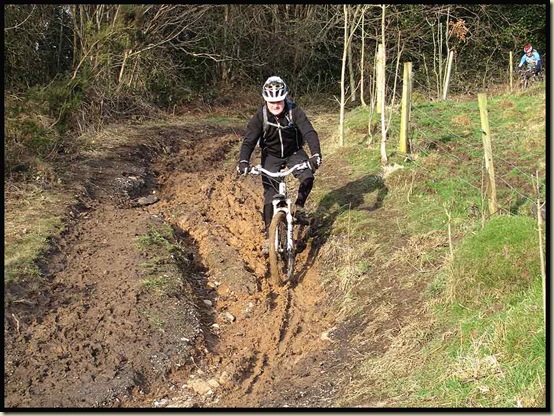 Thanks for leading, Steve.  I think we all enjoyed this ride.

Here’s our rough route - approx 24 km (15 miles) with about 600 metres ascent, taking rather more than 3 hours.  I reckon it would be around 2½ hours (give or take) in a smaller group without the pub stop. I’ll try it soon, as my Garmin was out of action today. 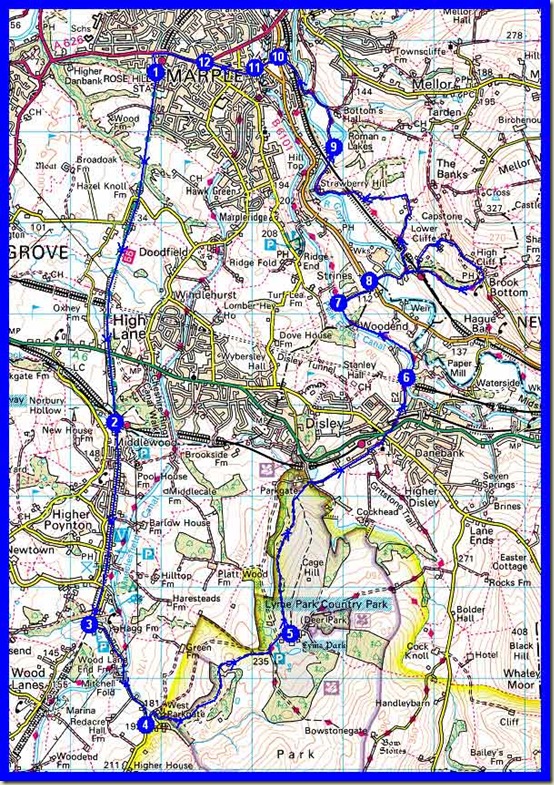 There’s a slideshow with a few more images here.