Sunday 6 January 2013 – A Circuit from Taddington 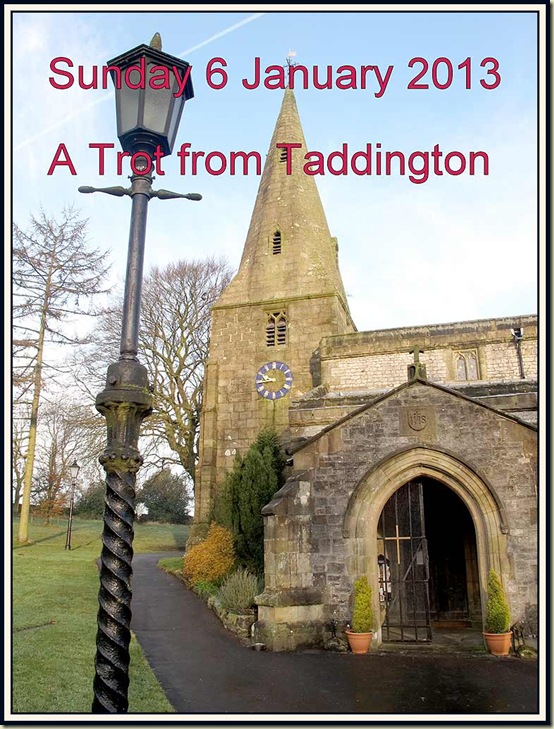 A Bimble on the first Sunday of the year has become a tradition.  Sue W organises it.  This year we received late news that she had ‘flu, so it was ‘over to us’ to organise.  This meant we could widen the invite list, and it was good to be joined by Bridget and Gary, as well as many of the regulars.

We arrived early – so there was plenty of time to explore the environs of the church (pictured above) - dedicated to St Michael and All Saints, and built in the 14th century.

Eventually the masses assembled, despite a misleading map reference (my fault, apparently), and 13 of us headed across fields towards High Dale, the descent into which was pleasantly illuminated by a wintry sun. The mist returned as we approached Miller's Dale, pausing frequently to regroup, here at the bridge over the old railway line that operated between 1863 and 1968. 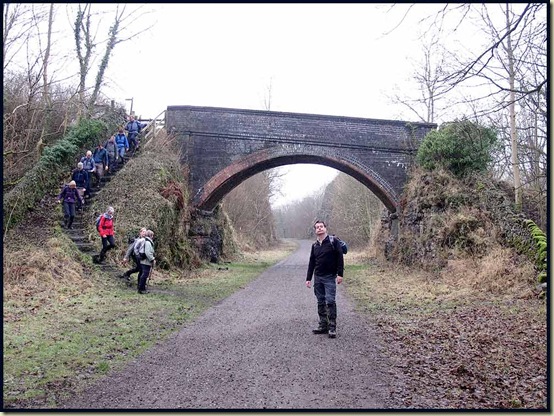 Today's route simply crossed the Monsal Trail, and headed to Litton Mill via a narrow bridge over the River Wye.  The river was fairly full, if not in spate, and it was good to see that the old mill has been put to good use. The original cotton mill, built in 1782, had a chequered existence, becoming notorious during the Industrial Revolution for its unsavoury employment practices.  It was replaced by the current building in 1874 and seems currently to be enjoying something of a renaissance by way of self-catering apartments such as this one.

Our path beyond Litton Mill ran beside the River Wye, which is well known for encroaching onto the footpath.  It did that today, effectively barring our way. 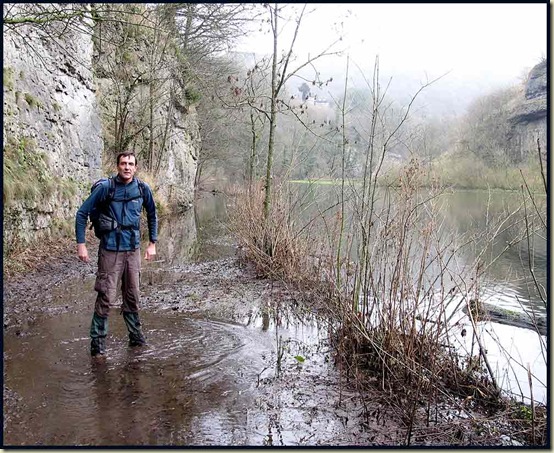 This provided an ideal opportunity to scoff some tea and Madeira cake before hauling ourselves up the high path to Cressbrook, where a short section of tarmac led to Ravensdale Cottages, and this MGA 1600 Roadster, which must be at least fifty years old. Surely it deserves better treatment. 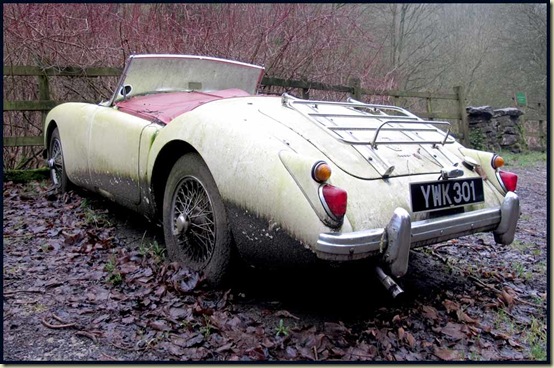 Beyond the two tiny rows of former lead miners’ cottages, we slithered on up the valley towards Tansley Dale. 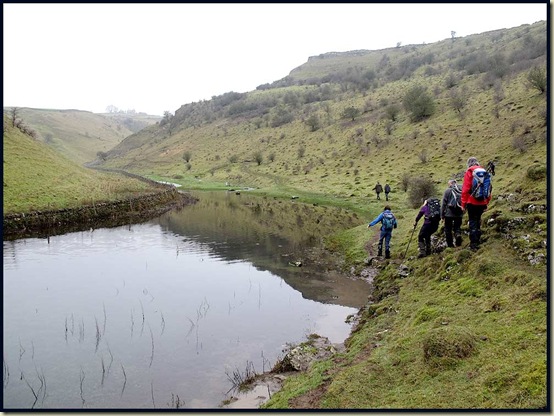 I’d planned to stop for lunch in Tideswell, but our slower than expected pace saw us passing through the village of Litton at around 1pm.  Keith and Carol had missed our Christmas Lunch Walk, so were anxious to make amends for that by enjoying a pub lunch today.  The Red Lion proved an ideal venue, and they were joined by the rest of us in the cosy pub after we’d noshed our butties at the picnic tables outside.

After a good hour at the Red Lion, Andrew took a short route back to Taddington whilst the rest of us rambled on in rather gloomy weather to Tideswell.

The church of St John the Baptist in Tideswell is known as the 'Cathedral of the Peak'.  Built in the fourteenth century, this fine church was funded by the local wool trade and by lead mining, as Tideswell was a major centre for the lead mining industry from medieval times to the nineteenth century.  As the mining declined from 1850 onwards, so did the population of the village and it has only started to recover in recent years. 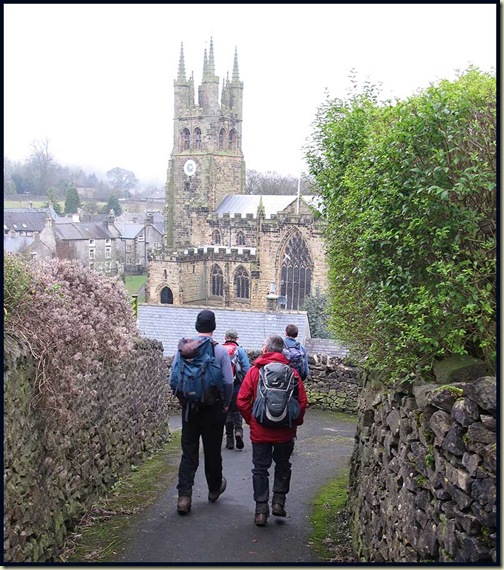 By now the atmospheric conditions had defeated the sun's efforts. Nevertheless, we enjoyed a pleasant rain free stroll back from Tideswell on good paths and tracks.

Darkness was looming on the last lap to Taddington, as we proceeded along the footpath from Priestcliffe. 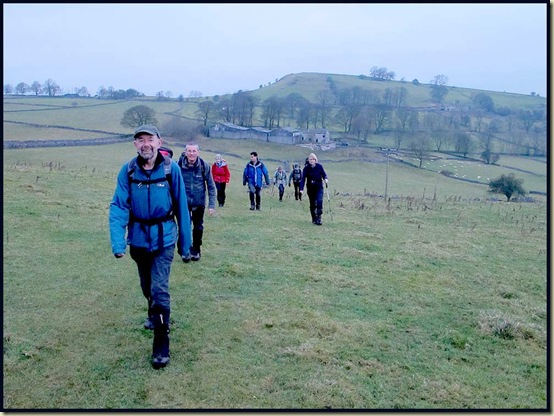 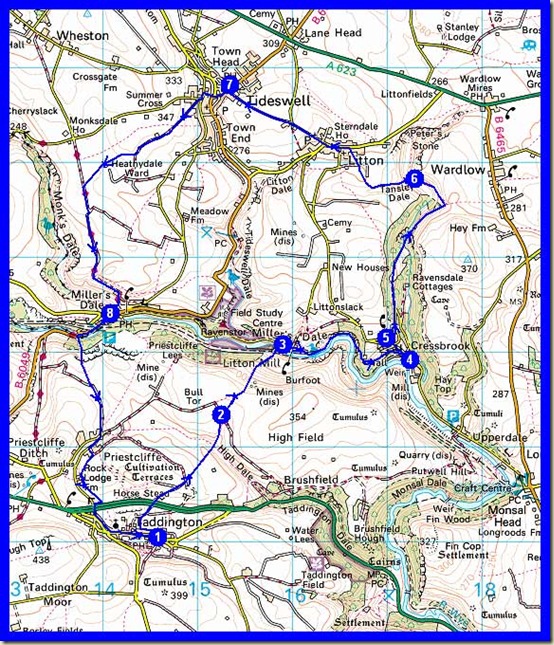 There are some more images here.

This was a most sociable and enjoyable bimble.  Thanks for coming along, everyone, and we hope that those who had to cry off have recovered from their ailments.