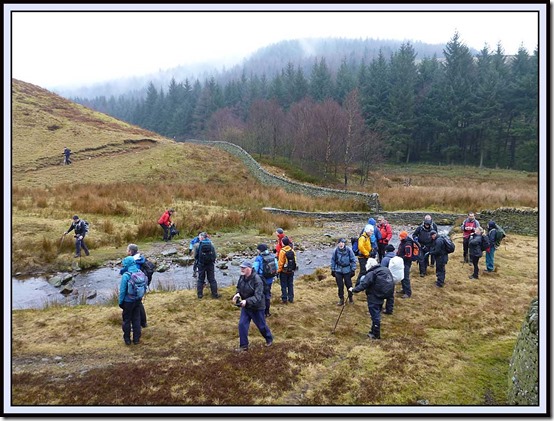 A near record turnout of over 40 Challengers convened at The Snake for their annual weekend reunion.  Living close by, and with a busy weekend, Sue and I just turned up for the day.

The ‘wild camping’ next to the pub looked as enticing as ever.  Gayle and Mick, in Colin the campervan, seemed to have made the best call!

Soon after 10am, Intrepid Alan led a motley group of about 34 people (he never seemed quite sure how many) over the stile across the busy A57 road.  It took a while for them to negotiate this obstacle, and there was an even longer delay at Fair Brook (pictured above), which unlike many of the Scottish river crossings has some easily negotiated stepping stones.

Then Alan led us gently up into the mist.  Frequent stops were needed to wait for backmarkers.  We hoped they realise the Scottish hills are longer, rougher and steeper than this path up to Seal Stones.

Another stile took a while to negotiate. 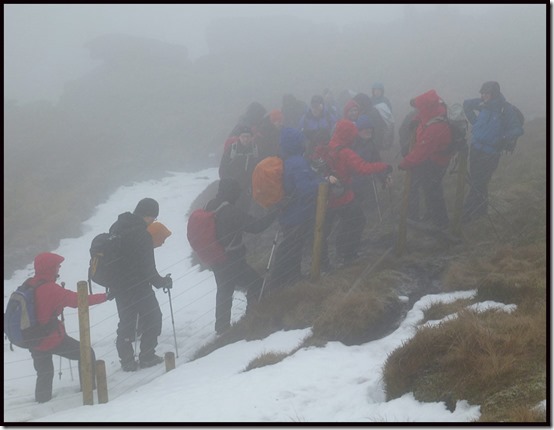 Elevenses and cake provided a minor distraction whilst we waited, but Gayle was getting cold, so we re-formed an ‘A-team’ and took our leave of the main group, some of whom had still not arrived on The Edge. 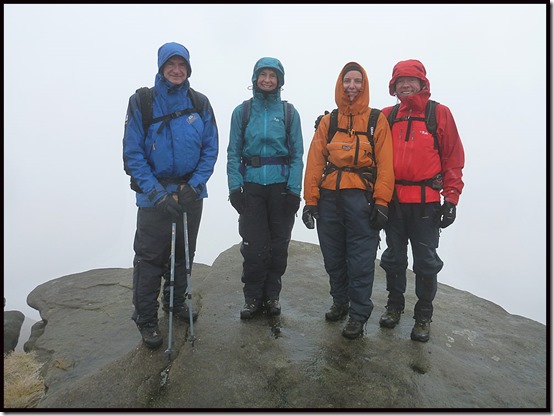 By and by we stopped for lunch some way along The Edge, beyond Fairbrook Naze.  Here we were joined by stragglers from the main group, which bizarrely seemed to have passed us (I still can’t believe that), abandoning ‘Science’ Dave and ‘Karrimor’ Chris to the elements.  They were happy to join us for the rest of the walk. 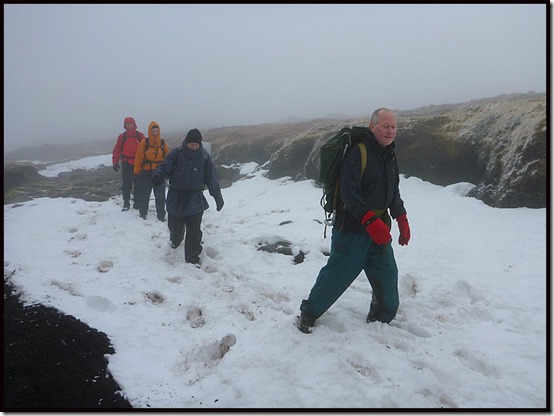 After sinking deep into numerous snow gullies along The Edge, the team assembled to record their experience at the head of William Clough.  The snow turned to sleet. 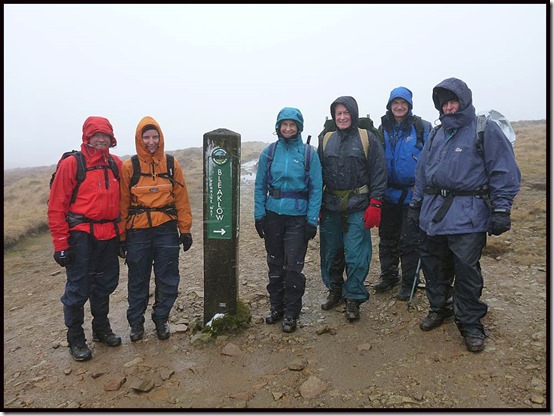 Here we joined the Pennine Way path, with its slippery slabs, nearly losing Dave, who took an unseen tumble and was almost abandoned.  Mick’s cracking pace facilitated ‘warming up’ after the slow and cold progress along The Edge. 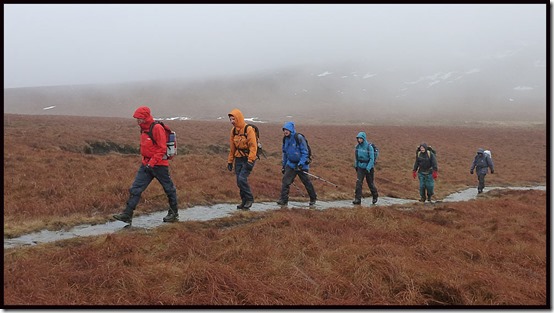 Over the Snake Pass road, the remains of a Vango tent fluttered from a fence, a relic from a DofE award trip perhaps.  I wondered how my daughter was coping with her DofE children on the Oldham moors nearby…

As we descended Doctor’s Gate and joined the lovely path through Lady Clough, the sleet turned to rain and provided a meaningful test for our old waterproofs.  They passed. 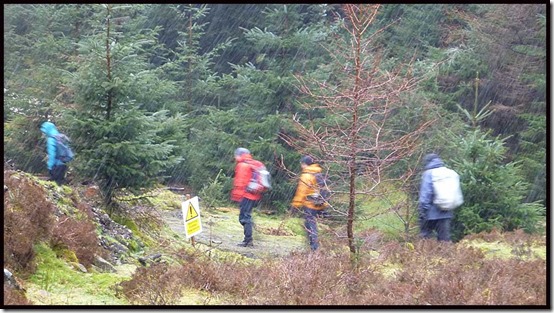 Backmarkers from the main group were overhauled as the Snake Inn came into our sights.  They had apparently taken a short cut down Ashop Clough.  Alan informed us that nearly everyone was accounted for.  Or so he thought. 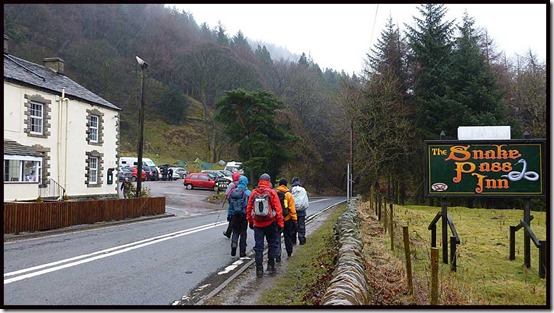 Tea and cake in Colin were most welcome, then we adjourned to the pub, where Sue attempted to set fire to her clothing in front of the roaring fire.

It was good to pass the day, and the evening, with this jolly group of Challengers, though we were sorry to miss Tim. 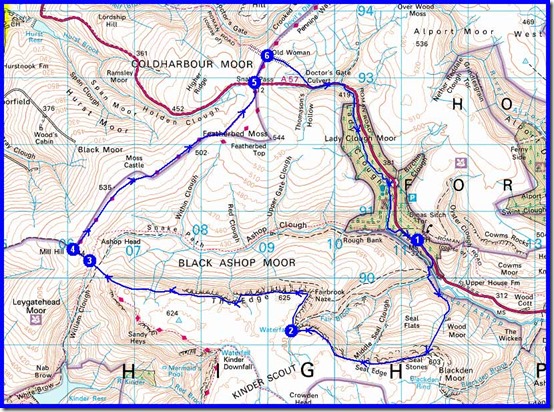 There’s an annotated slideshow here.  Taken furtively with my waterproof camera; feel free to ‘borrow’ them.  Gayle’s report is here.  Alistair’s is here.

Tsk. I go away for the weekend and come back to find my hills covered in snow. I suppose that's what happens when the Challenge comes to town!

Hi Martin,
Nothing wrong with the new camera. Good pics. Seems Kinder was tougher than Bleaklow looking at the snow. Maybe the northern sides copped it worse.

Q. What do the numbers signify on the map btw.

'Fast Mick' would have disappeared into the sunset had he been allocated a longer section!

Thank you for the photos. I've copied the ones I've wanted and will craft my masterpiece tomorrow.

We only seem to have one major variance of recollection (except for the leadership duties!), that being that Mick and I spent a while talking about and looking at how pretty the falling snow was as we walked alongside the river through Lady Clough. It was definitely snowing rather than raining at that particular point - although maybe it had been raining as we entered the woods.

Hope your journey home was uneventful. We were surprised at how much snow there was when we came to journey south (snow ploughs a-go-go, but not on our side of the road). Perhaps I would have been less surprised if I'd even glanced at a weather forecast last week...

Ok, it was snow, as verified by the white stuff on our car that didn't melt until we got home!
We await your masterpiece!

That first pic looks like the Beginners' Geocaching Class.

I bet there is a geocache somewhere close by!