Wednesday 6 March 2013 – A Plod Around Culcheth 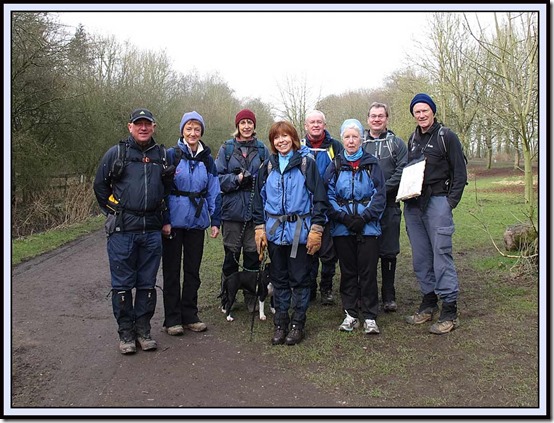 For the last of my four ‘here and there’ walks for Plodders whilst Reg has been out of action I’d chosen the flatlands of North Cheshire, where eight stalwarts duly assembled in the car park at Culcheth Linear Park.

We’d expected Roger to turn up, but perhaps the navigational challenge of getting to the start was a bit much for him!  Alan R was hard to spot, and almost unrecognisable as he appeared to have dyed his skin to match the colour of his car.

The Linear Park follows the old Wigan to Glazebrook railway line.  It opened for freight in 1878 or 9 and for passengers on 1 April 1884.  ‘Specials’ took racegoers to Haydock and bathers to Blackpool. 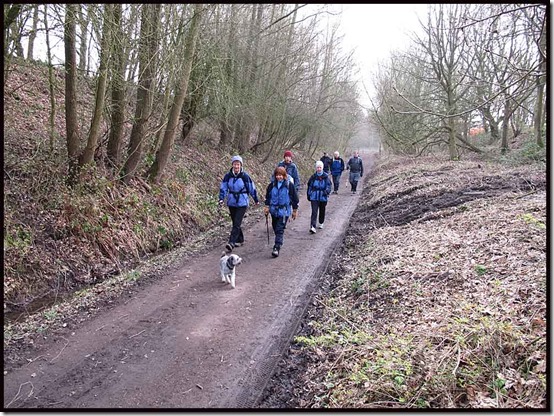 We strode down about half the length of the park, which ends at Kenyon Halt, where the railway once crossed the Manchester to Liverpool line.  During the war, extra lines were laid to cope with the goods traffic from the Royal Ordnance Factory at Risley, but by 1968, despite regular cargoes of oil being transported from Shell’s depot at Haydock, Beeching’s shadow had heralded closure.

The area became a muddy eyesore before being transformed, in the mid 1970’s, into the Linear Park we walked through today.  The old but lovingly carved bench, and the rusting signs shown below, indicate that this park is barely ticking over today, whilst other projects steam ahead.  It’s mentioned in passing on Warrington Borough Council’s website, but the link to its history doesn’t work.  It needs a bit of TLC. 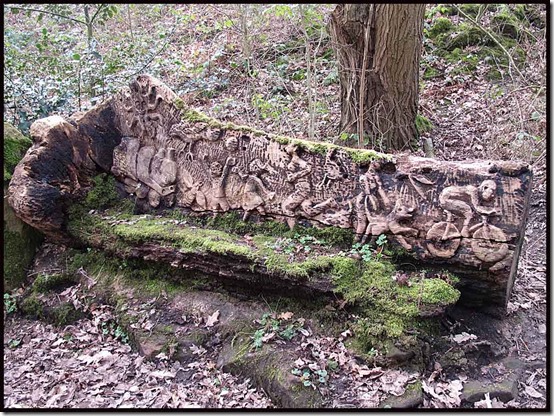 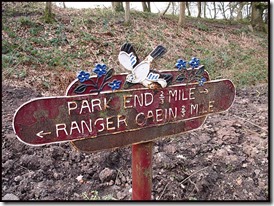 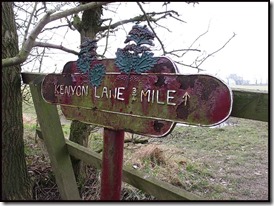 Shouldn’t there be a budget for maintenance?

We headed off in the direction of Kenyon Lane, enjoying the field paths which were nice and dry after this excellent spell of weather. 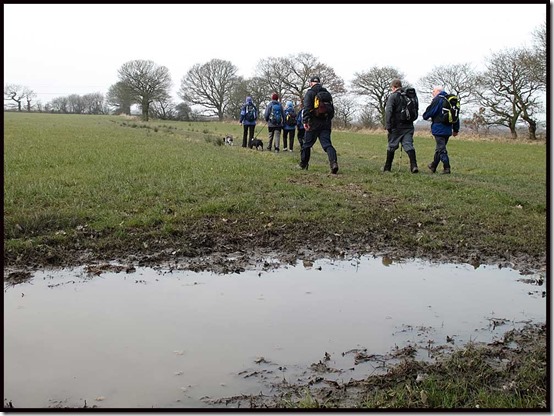 Alan and I both took close up photos of the huge clods of earth that had been thrown up by the plough.  The result in my case wasn’t impressive, so here’s a more ordinary picture of some Plodders plodding along the grassy public footpath the ploughman has kindly left in pristine condition between the cloddy fields. 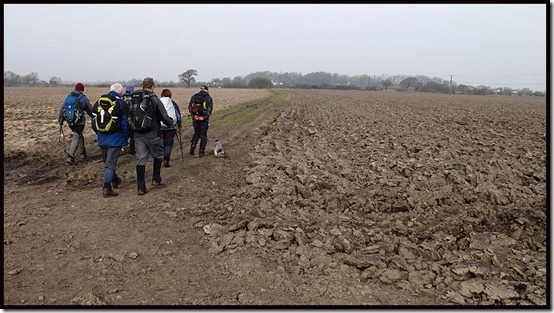 By and by, after managing to negotiate our way over the Manchester to Liverpool railway line, and dicing with death on the East Lancs Road and elsewhere, we came to a spot near Red House Farm, where a decision was required.

So we sat down and enjoyed elevenses (with traditional fresh cake), whilst a vote was taken on the route ahead.

‘Anticlockwise’  gained a majority, so that’s the way we tackled Pennington Flash, a lake formed around the turn of the 20th century by mining subsidence, but now a Country Park and bird reserve. 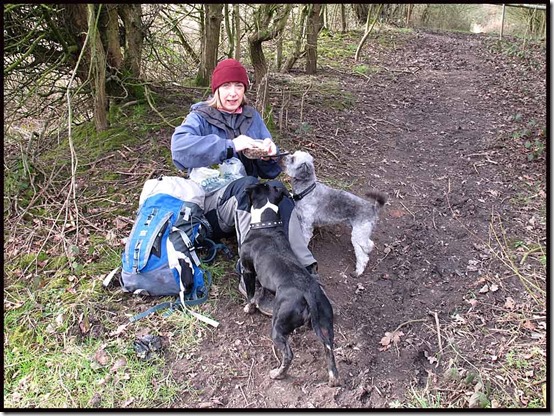 Clearly some residents, judging by the sign below and the disgusting state of their farmyard, would prefer the squalor of the old days before the Country Park was formed. 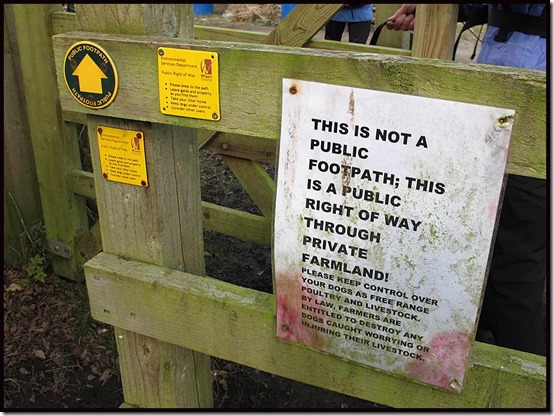 These days, apart from heavily armed scouse farmers (luckily we saw none), the Flash is a tranquil place with a large population of birds and numerous hides from which to view them.  We had seen a tree creeper in the Linear Park, and here we noticed a prevalence of Canada geese, swans, mallards, tufted ducks, coots and black-headed gulls.  Not particularly exciting, but lots of them.  Keen ‘birders’ would have spotted far more of the 230 species known to operate (but not all at once) in this area.  But Plodders just have to keep on plodding, or they seize up. 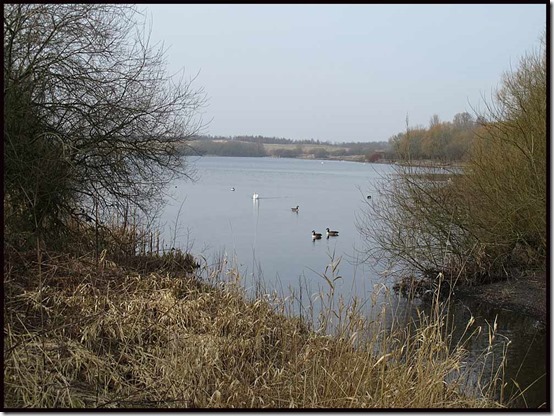 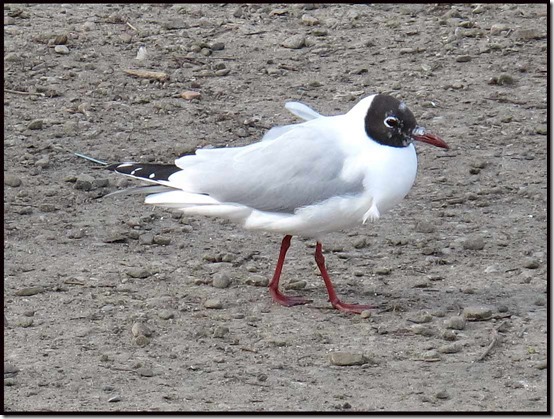 I discovered a reason for the ‘anticlockwise’ vote when we reached the Visitor Centre.  Others amongst us know this area better than me, and the toilets hereabouts seem to have exerted an attraction.  They desperately needed some maintenance, though. (Toilets, not Plodders.)

Our next landmark was the Leeds Liverpool Canal, where navigation became quite easy for a while. 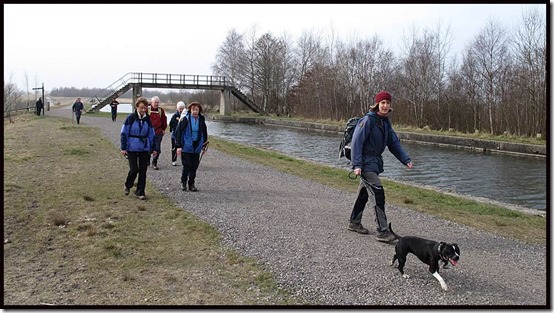 We headed off in the direction of Leigh and Manchester, soon stopping for lunch on two big benches next to a sign that told us we were at the junction of the Bridgewater Canal and its extension to the Leeds & Liverpool Canal.  I can report that the transition is smooth, marked only by the old derrick shown below. 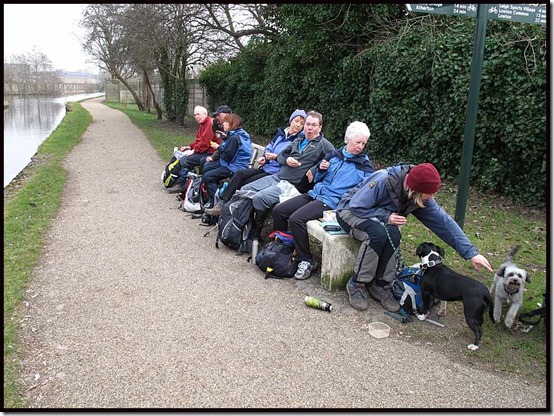 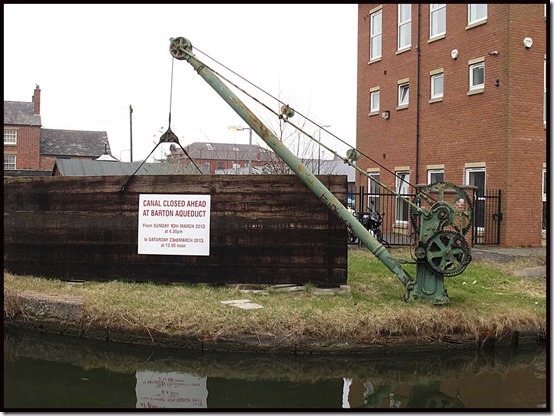 During lunch we’d been entertained by a plump cyclist with a step-ladder in his bag.  He lurked furtively next to a ‘Bridgewater Way’ information board, muttering things like “signs for route 55” and “mate’s late”, whilst anxiously glancing at his watch.  All a bit strange.  But his mate did turn up, and we left them, apparently in deep uncertainty as to where to place the signs that must have been festering in their bags.  I’ve since discovered that route 55 does indeed exist, and that I appear to have inadvertently strayed onto it last Sunday!

As we passed through Leigh, we came across this huge barge.  It dwarfed the familiar cruisers next to it and looked as if it would be more in place on the Manchester Ship Canal.  I suppose that in days past barges such as these plied this canal, loaded with coal or textile materials, not the dainty pleasure boats that we see today. 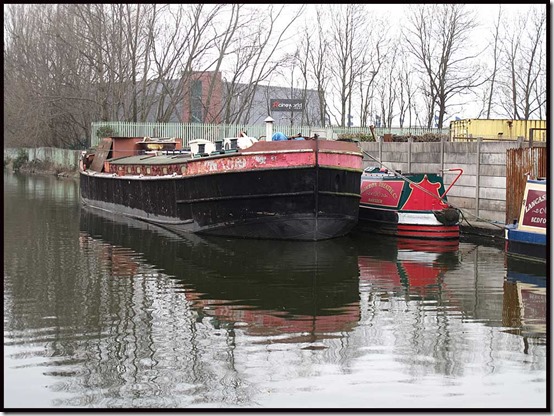 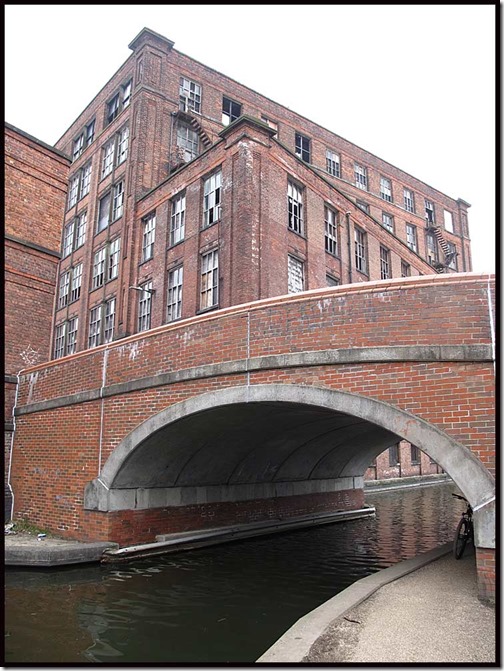 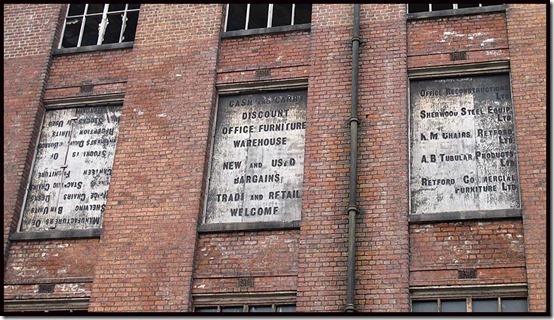 Built in 1882, Mather Mill was the first in the world to sport reinforced concrete floors.  It’s an iconic piece of Victorian engineering.  It’s falling into the canal.  Luckily no barge was passing as I took the above picture, the noise from my camera apparently triggering a shower of glass into the canal. The hardest bit about navigating a walk along a canal towpath is working out where to leave the towpath, as the bridges seem strangely similar and their numbers are carelessly omitted by the Ordnance Survey from their maps.

Guesswork proved successful on this occasion, and we soon gained our bearings with a degree of certainty when we found the East Lancs Road.  I’m not quite sure how we managed to get across without being converted to ‘road kill’, but we did. Then we passed through several farms; modern security equipment was in evidence, supplemented by uncontrollable barking dogs, and traditional drinking troughs. 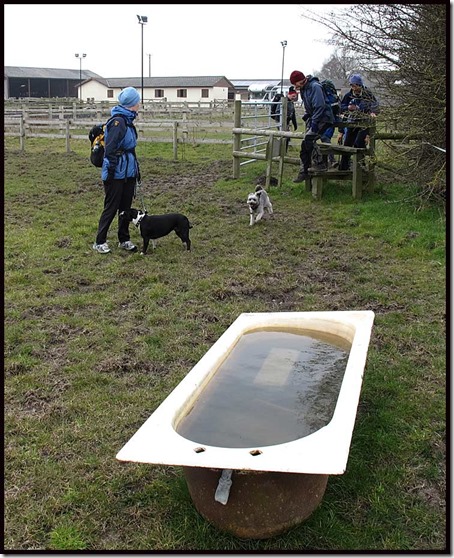 Alan R indicated that he could have identified these tractors even if he had been blindfolded (we’ll have to try that sometime!). 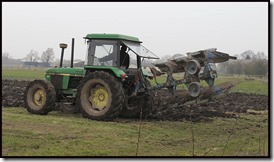 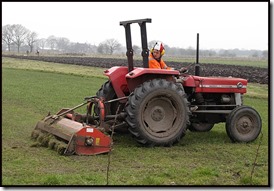 His worthy record of the day will no doubt provide tractor technicals that would only be revealed to me after hours of research.  After crossing under the Manchester to Liverpool railway line, we came upon the Chat Moss Hotel, so called due to its construction on land known as ‘Chat Moss’ (though others may differ), with its pub sign depicting Stephenson’s Rocket, a reminder that this railway line, opened by the Duke of Wellington in 1830, was the scene of the world’s first inter-city rail passenger service, after ‘Rocket’ had shown itself to be the most efficient locomotive of its time at the Rainhill trials. 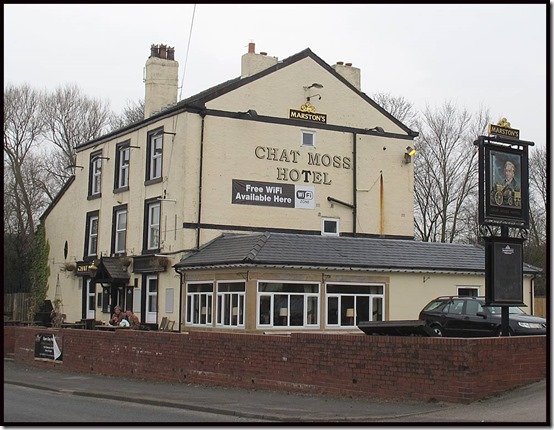 We halted nearby to enjoy a chat and a final swig of tea.

Beside the railway (seen below in the background, I should have waited for a train to come) a field of vegetables seemed to be running amok.  I stole a few cabbage hearts, with a view to soup, but they’ve wilted overnight and look less than appetising! 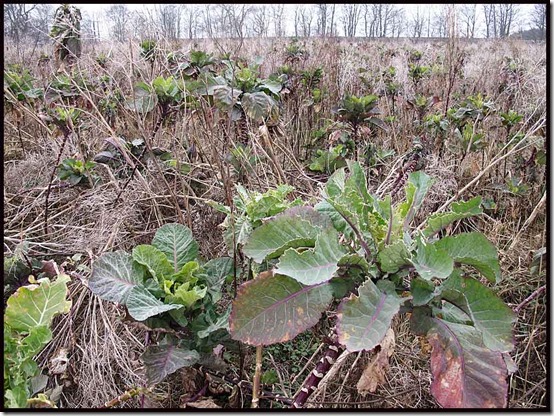 Our arrival at the outskirts of Culcheth indicated that this pleasant stroll was drawing to a conclusion.  It’s a posh place, judging by the luxurious nature of the housing that we passed on our way back to the Linear Park.

Did Alan’s tan fade during the day?  Certainly it didn’t get washed off, as the forecast rain had not materialised. 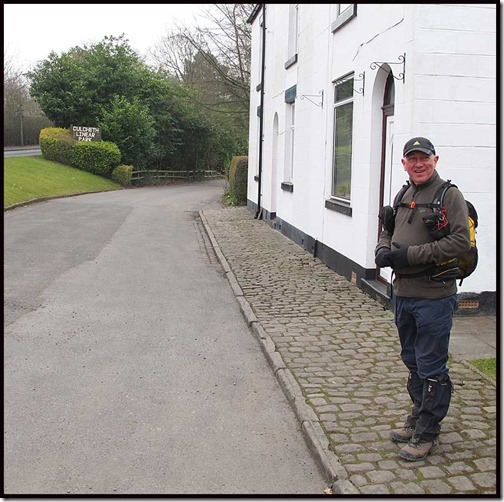 Nancy took the credit, having assiduously deployed her rucksack cover for the entire walk. 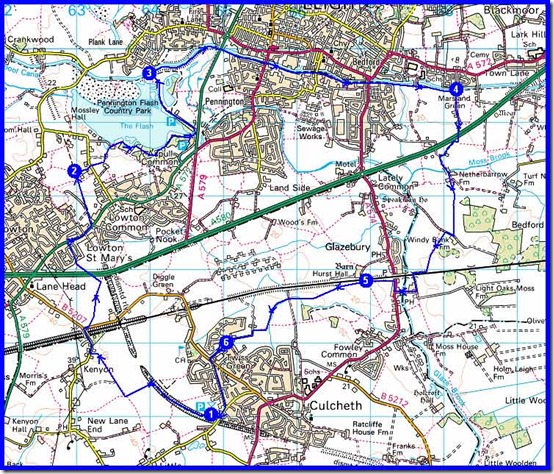 Thanks everyone for coming along, I hope you have enjoyed this little series of ‘here and there’ plods as much as I have.

There’s no slideshow – the images above are more than enough!  But Alan R has both written a report and produced a slideshow.  He certainly knows how to live life in his imaginary world full of nuthatches and chatty Plodders with moss covered footwear.

Was that lunch stop with the splendid benches planned or just fortuitous?

Judging by the number of old baths used as watering troughs by farmers, they must change them annually in their houses - a theory that doesn't seem to stack up with the rest of my general perception of their character.

I agree with you about the OS and canal bridge numbers. On my current canal project we count the number of bridges we have passed, but geriatric memory renders this non-foolproof.

The lunch benches were completely fortuitous, Conrad, unlike the the rather desolate location I came up with on the Nicky Nook walk six weeks earlier!

I'm sure by next week my tan will have completely disappeared. Thanks for the walk Martin and the 3 pieces of cake.


I have now added Prove you're not a robot to my blog to hopefully restrict all the spam i have been getting recently. As you suggested.

Thanks for the card- lovely orchids!
Have been enjoying following Martin’s walking “expeditions” and think Sue’s flower photos are superb!
And I loved the robin, too!
Keep it up-Love to you both!