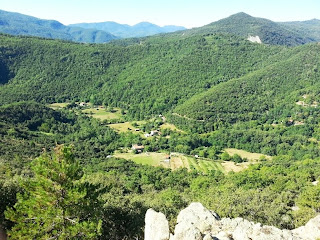 A short morning descending to Arles-sur-Tech behind Uli and Peter. The woodland paths were a delight, so I didn't rush. Unlike in 2004, there was no storm on the horizon.
Extensive views to Perpignan and the Mediterranean had disappeared after yesterday's final col, leaving us today with pleasant but more limited vistas to the Tech valley and to our route ahead.
Pine woods are now the main feature of the landscape, as you can see from the picture taken on the descent to Arles.
The path was also marked as a mountain bike trail, in places very challenging as such. I for one would be walking sections if going downhill, and I'd certainly be pushing uphill. The dragonflies could be a problem, they are huge around here and I don't envy the cyclist who gets one of them in his eye, or stuck up a nostril.
After snacking by the river, the boys headed off up towards the Moulin de la Palette gite whilst I pottered along the riverside path in the company of a community of Jays and Martins for the 4km to Amélie.
It was warm. So the beer, anchovy salad and a plate of chips at Au Poivre Vert went down very well. A waiter from Florida quizzed me about the walk. "I think I'll do it in October" he informed me. "I don't think so! " I replied. He must be a fairly recent arrival in these parts. "I've run lots of marathons" he added, justifying his ability to walk GR10. We agreed a compromise would be sensible, and he now hopes to start his Pyrenean walking adventures with a stroll up Pic du Canigou on a fine day.
Hotel 'le Regina' is on the main street. Sue had kindly booked me in for a couple of nights, and Danièle has been most welcoming, especially after a long conversation during which she eventually understood the reason for my asking for a cardboard box. I suspect it's not a common request!
So now I'm waiting for my clothes - all freshly washed - to dry before my next foray. There will be plenty of time tomorrow to write about that, as it's my first full rest day since Seix, several weeks ago, and a final pause before the last short lap of my journey to Banyuls.
Sent from our GR10 trip - see here for our itinerary
Posted by Phreerunner at 16:16