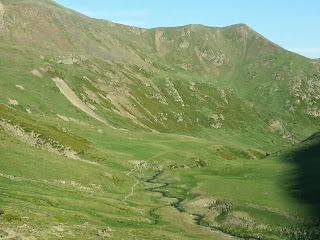 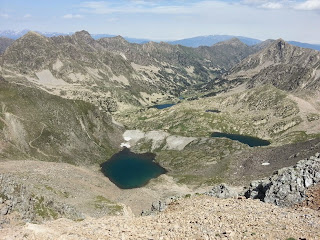 Humphrey has translated last night's wild camp location as 'The Drinking Field'. It's pictured, top, from today's initial ascent to the ridge. The spring water certainly tasted as sweet as many a beer. I'm now enjoying some of the real stuff at this excellent Spanish refuge, in the company of a couple of gents from Saddleworth and their Dutch friends.
Yesterday Sue managed to book accommodation for me all the way to Banyuls, so this was my last wild camp of the trip. A fitting location. The wild camping angel was breathing down on it, leaving me with a crispy-dry tent that doesn't need airing, even before the sun was up.
Once up on the ridge, past two big herds of barking Izard (sorry Nick, they were quite distant and I wasn't fast enough with the phone camera) I could easily ascend to Pic d'Elna. From there, Pic de Noufonts, the high point of the day at 2861 metres, was easily reached. The ongoing ridge curved into the distance like a wriggling snake or a fairground ride. It was great. Quite a few people around but not too crowded, and the short day encouraged lots of rests.
There was a brisk wind from Spain, seemingly trying to repel cloud arriving from France. My fleece was donned for the first time in weeks. Out of the wind it was hot, so frequent 'fleece' stops were appropriate. They provided an excuse to admire the views, one of which - to Estany de Carança to the north - is shown above.
On the final summit the Canigou massif appeared - the final big mountain on this long trip.
Nearby was a strange ice axe memorial to Elena Fernandez Mañe (1964 to 2003). On the descent, birds of prey floated in the sky above whilst large white butterflies fluttered haphazardly above the flowers.
So, a wonderful easy ridge walk at around 2800 metres, then a leisurely descent along GR11 before rising to another col (Coll de la Marrana) and strolling down to the friendly refuge. It's a different place to the one Sue and I visited nine years ago - in feel if not in fabric.
I was there by 3pm. Also here is Peter, a Dutchman with a German friend, Ulli, who is going my way. He walked the Appallachan Trail last year. All of it. Respect!
There are also two chaps from Saddleworth, Kevan and John, with their Dutch friends, Lambert, William and Twan (Tony), who are walking a local five day circuit.
Altogether a very sociable place. Dinner, very tasty, with Ulli and a friendly French couple who live in Barcelona.
Sent from our GR10 trip - see here for our itinerary
Posted by Phreerunner at 19:48

No, I made a mistake. It's Uli with the big appetite, not a glutton though, as he courteously offers the food to everyone before delicately cleaning the serving plate. Unlike the glutton of Merens, who just grabbed everything he could and shovelled it down.