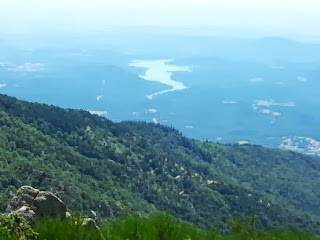 Weather: sunny at first with some cloud and a few spots of rain in the afternoon

There were lots of alternative routes today, but in the end I chose to wander along the regular GR10 path, on the grounds that it was the longer of the possible options and would fill the day, and it would be almost entirely new ground for me - as has the route all the way from Batère Mines, surprisingly.
We spent some time chatting with Laurent at the gite. He is proud of their 'Eco credentials' and of being able to use the solar cooker to prepare vegetables that are not overcooked. "How do you say in English?" he asked. "Al dente" I suggested, to much amusement.
There were lunch items for sale outside the gite, and a sign 'boots and sticks this way'.  "Really!" said Gwen, "so we could buy some new boots here?"
Charles and Elizabeth followed the same GR10 route as me at a slightly different pace, but we started and finished roughly at the same time. Charles's rucksack is 20 kilos heavier than mine! He's quite fit.
Last time I was here we followed the HRP route along the border with Spain. Today's rather longer walk (proven by Heikel and Anna-Marie's arrival at Las Illas via the border route an hour before the rest of us) was a delightful stroll through sunlit woods with frequent views through clearings.
On the path to Montalba d'Amélie I heard rustlings nearby that had to be coming from animals rather larger than the usual green lizards. I was still a little surprised to see a gang of wild boar swagger across the path just in front of me. Hefty dark brown creatures.
The mushrooms aren't quite ready here, and the flowers are mostly over in the woods, so they do look a bit bare at present, with lots of wild boar scrapings in evidence.
Coll Cerda warranted a short break and a check on yesterday's blog posting that had been 'sending' for an hour and a half.  It eventually 'failed', after draining 30% of a battery. A couple of pictures were removed and then the posting went, but it subsequently disappeared from the 'sent' folder.  So my plaudits about the S3 phone were perhaps a little premature, particularly as it has developed an occasional tendency to freeze, losing whatever is being worked on, just like an early 'windows' computer.
After a fairly long climb, the last section of which was accompanied by a sweat craving inundation of flies, the high point of the day - the ridge below Roc de France - was reached.  I joined Charles and Elizabeth, who seemed to be in the middle of a four course banquet, to finish off my goats cheese and tomato baguette. The breeze kept the flies away (they weren't noticeable after that) and there were extensive views into both France and Spain. The latter is pictured. By now some high cloud and haze had arrived to succeed the perfect clarity of the past few days.
The GR10 path then continued on its merry way, past a variety of large rocky outcrops in the trees (Roc de France is the highest of these), eventually reaching Col de Cirères at 2.50pm amidst a brief flurry of raindrops from the cloud that was building rapidly over Canigou.
A speedy descent to Las Illas saw me passing a new couple as well as Charles and Elizabeth. Most were staying in the gite, but a review of my emails indicated that Sue had probably booked me into the Hostal dels Trabucayres, the hotel/restaurant where we were all enjoying a beer. I enquired. My name was not on the list, but it must have been somewhere, as I was shown immediately to room number one. Those staying at the gite declared mine to be a good decision, and my demi-pension price of €39 is cheaper than staying in the gite and eating here.
C&E lingered over a few beers before departing to try to eat some of their food mountain, snd Heikel and Anna-Marie joined me later for a very good meal at the Hostal (which is a small hotel). The new couple are the only other people staying - it looks as if their bags are being transferred 'Tour Aventure' style.
No phone signal again tonight.
NB GR10 is supposed to be about 900 kilometres with 50,000 metres ascent. My trip passed both those landmarks today. So I have two 'bonus' days!  Yippee!
Sent from our GR10 trip - see here for our itinerary
Posted by Phreerunner at 08:53

I think what you have managed to do with the S3 has been nothing short of miraculous. One blip which may or may not be its fault can be forgiven i’m sure.
Sheila is still clinging onto her S3 and i’m finding it a struggle to prise it from her.

Thanks Alan, the biggest challenge has been the tractor pictures!