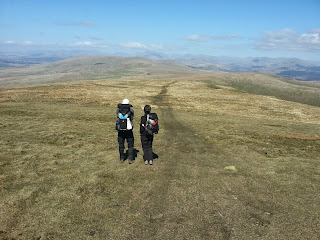 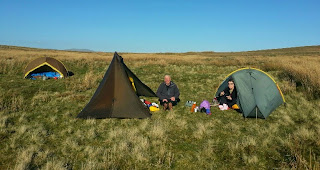 The cupboards full of hiking gear were ransacked yesterday,  and supermarket shelves were raided, resulting in a rather tubby rucksack.
This accompanied me on the very pleasant journey to Silecroft, where Alan and Sheila performed a touching 'meet and greet' ceremony with their friends Alan and Tina.
And so it was that a little after noon on a perfect summer's day, our intrepid trio embarked on its Lakeland perambulation. There were a few folk about as we ascended Black Combe, but it was a Bank Holiday after all.
The lunch stop was welcome. We were joined by Freddie as we lounged in the sunshine. He assiduously licked out the remains of the sauce in my tuna salad's container.
We missed the turn to the south top, distracted by a couple of quad bikes, so Sheila guarded the rucksacks whilst Alan and I bagged the Birkett.
The bikes phutted off when we reached the 600 metre trig point - our high point for the day. From then on we enjoyed the peaceful surroundings of these quiet coastal hills.
Stoupdale Head was easily reached after a lengthy descent (pictured) and a meagre 30 metres of ascent. From there we headed down to White Combe accompanied by views of the Duddon estuary and across to Black Coombe. A couple seemed bemused by our planned itinerary. They watched with puzzled expressions as we descended further to White Hall Knott, after we'd told them we were heading for Harter Fell.
White Hall Knott, diminutive in stature at around 300 metres, turned out to be a lovely little hill with more brilliant views.
We had planned to camp in the valley, by Horse Back, but it was still only mid afternoon, and whilst a sheltered spot, which looked good from above, was planned, it would have lost the sun early. So we lugged our huge packs (Alan and Sheila may dispute the adjective) back up to Stoupdale Head then down the fence line towards Stoneside Hill. Arriving near a sping emanating from the Black Dub area near Charity Chair at 4.40pm, a wide expanse of flat ground on the watershed, with fine views both east and west, meant that the decision to camp required only a smidging of brain power.
Our camp site is shown. We've enjoyed a memorable afternoon and evening in perfect conditions. Lots of goodies have been consumed, and the slight haze has cleared to reveal a large island to our west. A lovely sunset rounded of this fine afternoon in the hills.
We walked about 12.5km, and ascended about 750 metres during the four and a half hours since leaving Silecroft.
Sent from the English Lake District
Posted by Phreerunner at 09:33