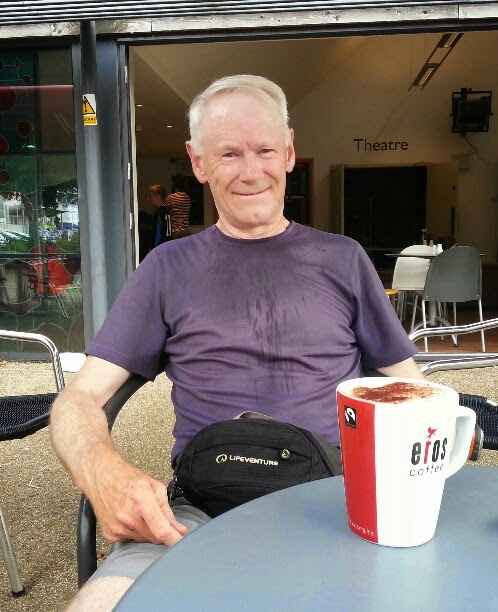 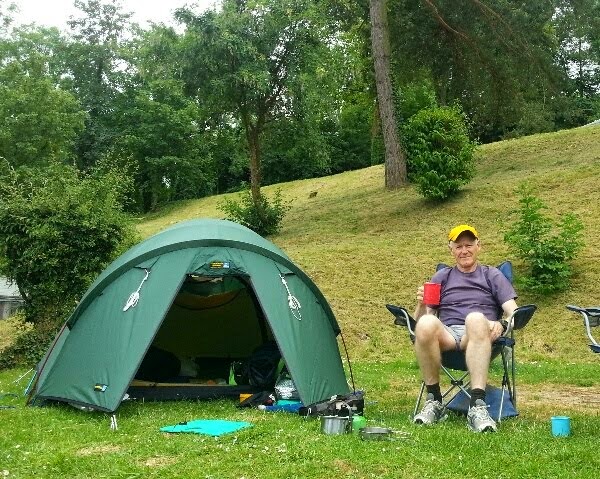 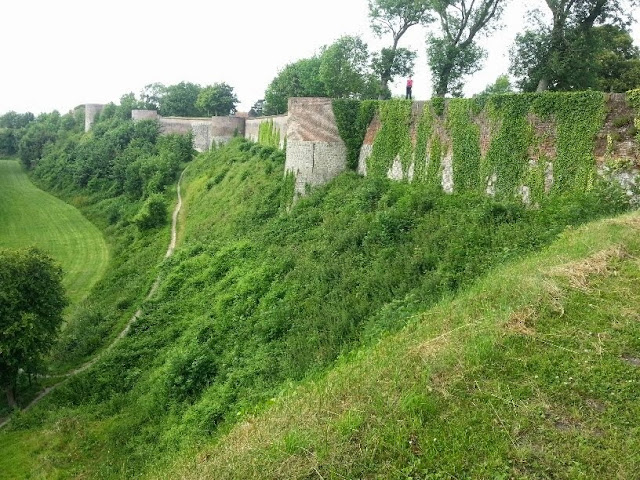 A lovely morning in Wokingham saw us bidding fond farewells to Jill and James and heading off to Woodley for my Saturday morning jogging 'fix' at the local 5km Parkrun. It was a fast course, resulting in my best time for a while - 21.35, only just outside my best. It's a shame that's my last such outing for over a month. Meanwhile, Sue went for a stroll around the course and shouted encouraging noises to some of the 235 joggers who had turned up to try their hands (legs, even) at this pleasant three lap course.

Coffees outside the Oakwood Centre, where I'm pictured, enabled any perspiration to vaporise before our (less tedious than yesterday's) 120 mile drive, via Ashford to collect some lunch, to the Chunnel terminal at Folkestone.

If we'd known TGO Challenger Alan Sloman's address we'd have dropped in on him en route; luckily for him we didn't. (Hi Alan.)

As one who suffers from seasickness but not from claustrophobia, I find the Chunnel by far the most comfortable way to cross the Channel. Today we arrived at the terminal two hours early, but with their customary efficiency the Chunnel people got us to Calais within an hour of our arrival at Folkestone.

After another pleasant 50 miles or so through French countryside littered with wind farms (I don't remember them from previous visits), we arrived in the flowery and ancient town of Montreuil, where we were soon in the familiar surroundings of La Fontaine des Clercs campsite and its friendly and memorably portly guardian. Despite having put our clocks on by an hour, we were enjoying a brew (again I'm pictured - wow, two pics of me in one posting - that's rare!) by soon after 4pm.

It's a lovely campsite, only €15 for the two of us including car and tent, situated just below the town walls. We strolled up to and around the walls - establishing via my Garmin gadget that the circumference of the walls, via the Promenade des Ramparts, is about 3km. At one end of the town is a 16th century citadel that was built on the site of an earlier castle. The lower image (if they all transmit) shows a view along the wall towards the citadel. Around the walls one species appears dominant - blackbirds, there are loads of them.

After walking around the walls, we took to the town itself. An interesting place with ancient cobbled streets. Dinner and beer was obtained from a small shop, and after a further 3km of wanderings we adjourned to the campsite for an alfresco meal in calm warmth outside the tent as we slowly lost the sun, which seemed to be synchronised with Chile and Serena, who at that moment both lost their respective jousts.

Here's a slideshow for the day (18 images)
Next Day
Back to Index
Posted by Phreerunner at 20:15