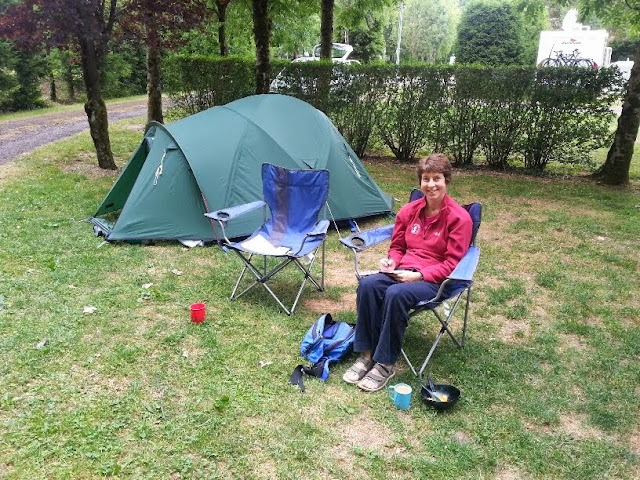 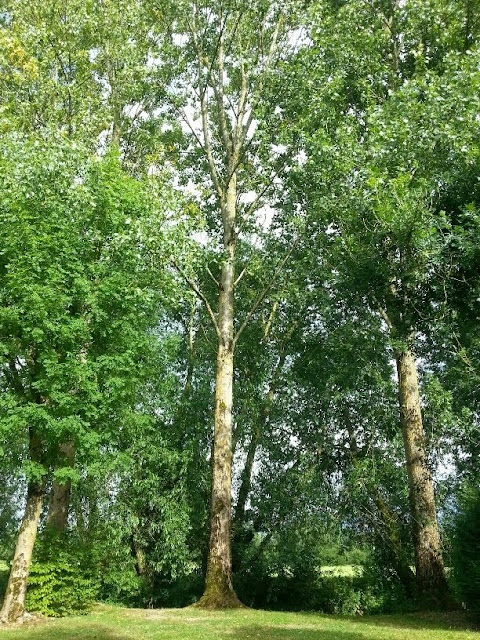 It's great to wake in a cosy tent to the sounds of cooing doves and chattering blackbirds. Apparently it rained in the night, but the Hyperspace tent, built to withstand just about anything, was as oblivious to that as I was.

Today was spent mainly in the car, on a 240 mile journey avoiding motorways.

After calling in at Saint-Pol-sur-Ternoise for croissants from the Boulanger Patissier (Andrew Junior would have been impressed by the two lines of chocolate) and eating them next door in the Café de la Paix, we headed along quiet roads through occasional downpours past fields of white and pink, and past lots of water towers and newly installed wind turbines.

Diesel is €1.30 per litre, so if you are driving to the 'mainland' you'll save by waiting to fill up until you are out of the grip of UK taxes.

In the area that borders Belgium we passed lots of unsightly slag heaps, so we shied away from that heavily industrialised zone in favour of the poplar lined byway of the D643 road to Charleville-Mézières.

Lunch was provided by a roadside CoOp - baguette with cheese and tomato.

During the afternoon we met a convoy of around a hundred caravans, mostly being towed by white vans. What was that!

A storm followed us for much of the afternoon, but it had dissipated by the time we reached Les Breuils campsite at Verdun. Another friendly, familiar and cheap spot where we can eat in the restaurant and form a 'European' alliance with some Dutch football supporters.

Today's pictures are at the campsite. The second one is the view from the empty chair on the first picture. So you can picture where we are. ..

That's it for now. If we do anything interesting during what remains of the day we'll report on it tomorrow, but 'chilling out' is the current name of the game, with Sue engrossed in 'The Little Old Lady Who Broke All The Rules' and me enjoying Khaled Hosseini's 'And the Mountains Echoed'.

Here's a slideshow for the day (12 images)
Next Day
Back to Index
Posted by Phreerunner at 17:30

Just started reading your book (I know it's taken me a while but I'm a sleep deprived mother of two!). It's quite good! I might follow you this year! It looks beautiful.

Thanks Kate - I do hope you enjoy it - in your own time! This year's trip is mundane by comparison, but if it's any comfort I won't be writing a huge amount.

Thanks Alan for your earlier comment - we are enjoying a gentle start to our Summer Holiday, as you can see.