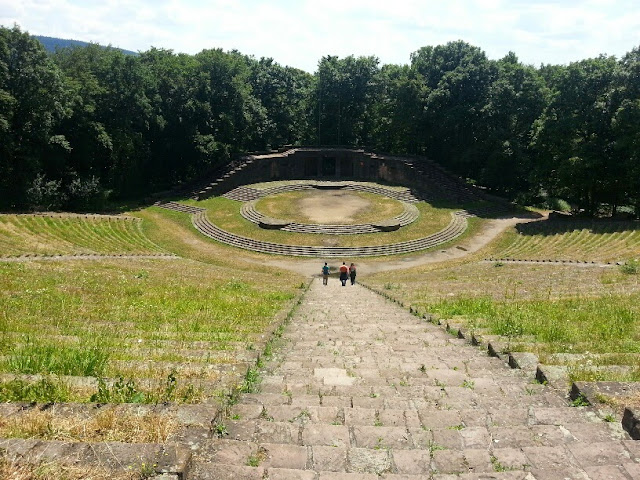 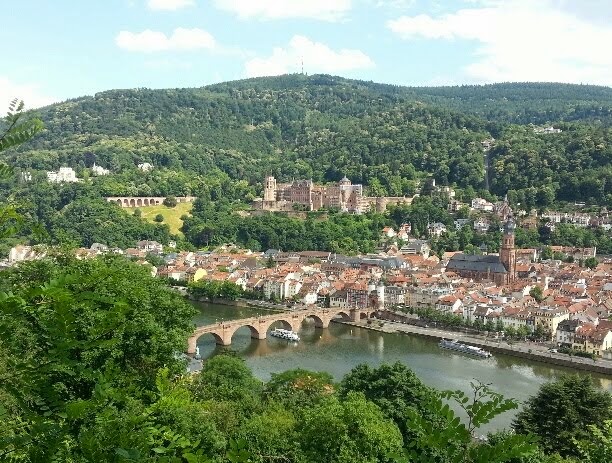 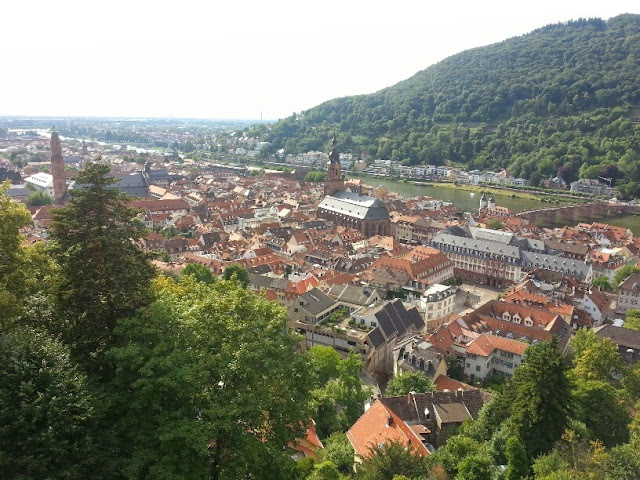 A lovely day with Andrea and Thomas, walking into and around Heidelberg.

Sue found a website with '97 attractions in Heidelberg' and we visited quite a few of them as well as gathering candidates for another three attractions. 97 seems to us rather a pathetic failure to reach 100. So 'wild fruit' can be added to the list, with blueberries, raspberries and blackberries - yes, on 1 July - all being sampled today.

After a substantial 'Full German' breakfast on a lovely sunny day, we set off around 11 o'clock and rose through woods to a communication tower near a convenient café. There are a myriad of signposted routes in this area, especially for mountain bikes. We followed a red route through woodland that emerged at the ruins of Klosterruinne St Michael - a religious centre dating from before 400BC.

The ruined abbey was an interesting place, as was the amphitheatre like structure nearby. The latter, pictured top, is Thingstätte, built by the Nazis in the 1930s with a huge capacity. Hitler never came here, but the place was used for the shameful glorification of Naziism. Nowadays it occasionally hosts concerts.

Below the amphitheatre was another of several towers encountered today, Stephansklosters Tower. We climbed to the top to admire views of Heidelberg. Nearby was a 56 metre deep hole in the ground - Heidenloch - which appeared to be someone's persistent but futile attempt to dig a well. An impressive hole, especially when I found the light switch that illuminated it.

Lower down, we passed Bismarcksäule, another tower that we climbed (maybe that's the answer to the 'why do I feel so tired?' question as I try to avoid nodding off whilst writing this).

Views of the town slowly got closer as we made our way down to the Philosophersweg - another of Heidelberg's attractions. I'd been here before, on a summer holiday in 1981. Only two other readers will remember this trip, and neither is listening at present, but the wonders of text messaging will see to that. It doesn't seem to have changed much in those 33 years. The middle picture was taken from the Philosophersweg whilst watching a red squirrel devour the fruit of an almond tree.

The 'Old Bridge', which is actually a new bridge because the Nazis destroyed the old one in an attempt to halt the Allied advance in WW2, delivered us to the tourist zone, and a welcome beer. Beer o'clock is indeed alive and well, Humphrey.

Duly refreshed, we stumbled up to the castle, which covers a substantial plot overlooking the town. The castle deserves an entry of its own; all I have time to report now is that it is a miscellany of different architectural styles, partly ruined and partly fairly new, with a rich and colourful history.  The bottom picture was taken from here.

By the time we got back down to the Old Bridge we'd walked a good 18km on a hot day and were pleased to be able to hop on a bus to return to Wilhelmsfelder Strasse and the delights of an evening with Andrea and Thomas. Their cooking philosophy is very like ours, as is their taste in wine, so we've really had a great day and a great evening. Thanks A and T - for your companionship and wonderful hospitality. We miss you in Timperley.

Thanks also to HMP3 for your recent comment on this rather mundane trip on which my diary entries are principally for the purpose of keeping in touch with friends like you, and family whilst we are away. Believe it or not there really were zebras and camels outside yesterday's supermarket, beer o'clock is alive and well, and my daughter has finally got round to reading about my 'Pyrenean  Adventure', perhaps at some cost to her children. My son may find a copy in his chalet room next week.

Goodnight, sleep tight. We will!

Here's a slideshow for the day (64 images)
Next Day
Back to Index
Posted by Phreerunner at 23:01