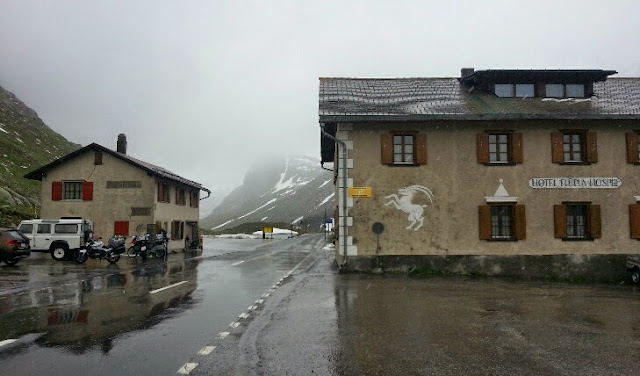 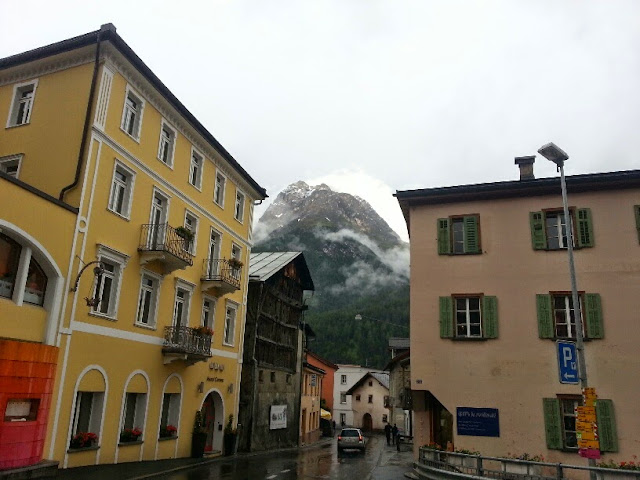 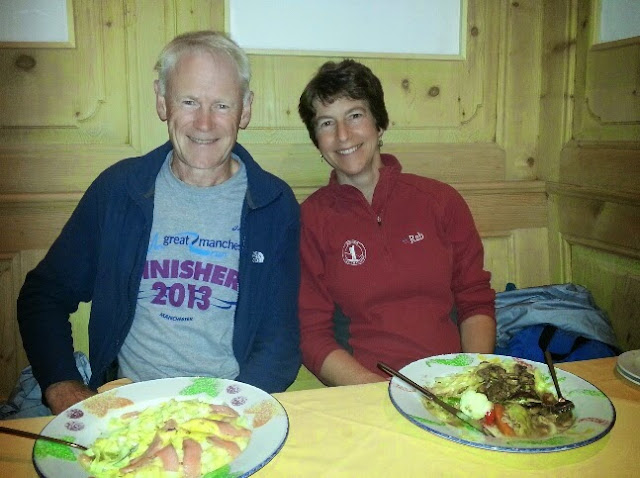 We said goodbye to Thomas last night as he had to leave early for work, and the unenviable task of a three hour telephone conference between Germans and Japanese, conducted in (pidgeon?) English.

By the time we'd dragged ourselves from holiday slumber, Andrea had laid out the traditional table of buns, cheeses, cold meat, yoghurt, fruit, jams, etc, with her home made jam and cheese stealing the show.

Leaving at 9.30, we avoided the rush hour traffic as we started our 330 mile journey to the Swiss village of Scuol. The A6/A7 route to Ulm worked fine as we left the sunshine of Heidelberg and ventured into gradually more overcast surroundings, eventually turning hillier, but by then the sight of any hills was obliterated by persistent rain.

Lunch in Lindau brought back memories of a wintry visit to Dornbirn and Markus and Wolfgang's 'Ritzy Shack'. It was warmer today. But wet. Memories of E5 returned as we wound our way around the waterways that flow into Bodensee.

From Lindau we took a scenic route via Buchs and Klosters to reach the excellent campsite at Scuol by 6.30. More memories for me as we passed over the 2300 metre Fluellapass, pictured top, that Markus and I cruised over on our TransAlp bike ride a few years ago. Given that this same Markus arrived at Scuol's posh campsite at the same time as we did, the reminiscing carried on long into the evening. We had passed through here on the bike ride, shortly after accidentally appearing to lead a mountain bike endurance race.

Tents went up under a seriously leaky sky. Then after a quick brew we adjourned to admire the Hotel Traube's lavish menu. We couldn't resist. The top of a mountain had appeared as if by magic between two buildings in Scuol, and Traube's chef turned out to be on good form. The pictures should speak for themselves.

I'll mention Swiss prices just as an aside, being as we are paying a brief visit. The campsite costs slightly more than twice as much as its French equivalent. Other prices are subject to a similar formula. Be warned and consider staying away if you are on a tight budget.

We emerged from the restaurant to a cool, clear evening, today's weather having ranged from a sunny 20C to a snowstorm at the pass. We are now set for a frosty night. Brrr.

Here's a slideshow for the day (7 images)
Next Day
Back to Index
Posted by Phreerunner at 21:39