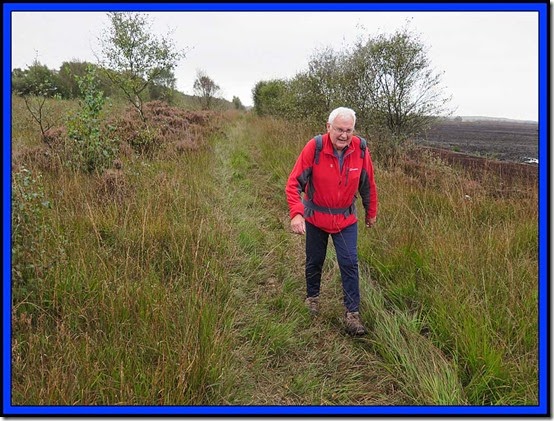 Glazebrook was mentioned in my last posting. That was in the context of a recce for this LDWA Plodders walk. In the event, only Reg turned up, and that was partly because he wanted to recce this section of the Salford Trail for himself, as he's doing it shortly with another walking group.

I suppose it's a credit to the LDWA's ethos that only Reg and I felt able to stoop to walking anything less than ten miles.

Here's the route - 10 km in 2.5 hours (note that I'm not pandering to LDWA luddites who fail to acknowledge any sort of metric measurements.) 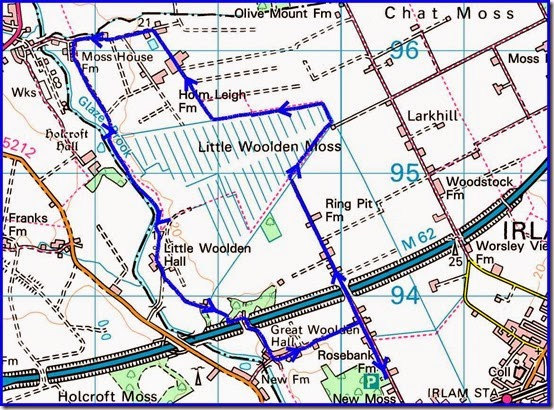 It was a cloudy morning, on which Reg and I enjoyed a good chat. Despite being close to the centre of Manchester,  we saw just a couple of people upgrading a footpath, and a few farm operatives getting on with driving tractors, pulling radishes or tending to ponies.

The footpath people seemed totally unconcerned that beyond one end of the new path was a jungle of nettles and brambles, and at the other end a ploughed field with no sign of a path.

Previous postings involving this route are here and here - there's not much more I can add to those commentaries, but here are a few images from today's visit.

Turf is one of a number of local crops: 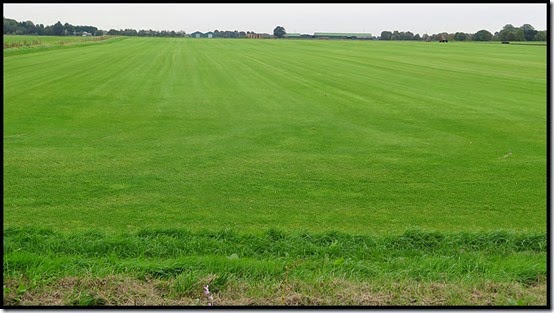 ‘Please use alternative footpath’ – now where might that be? 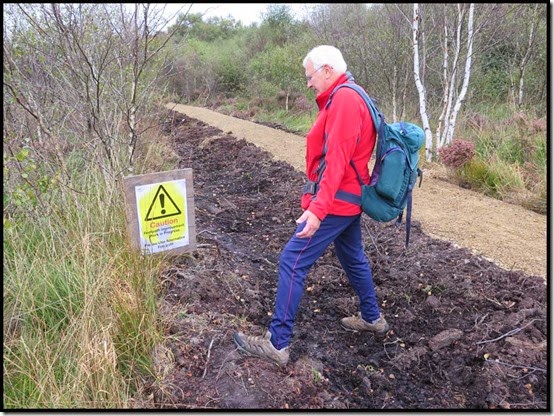 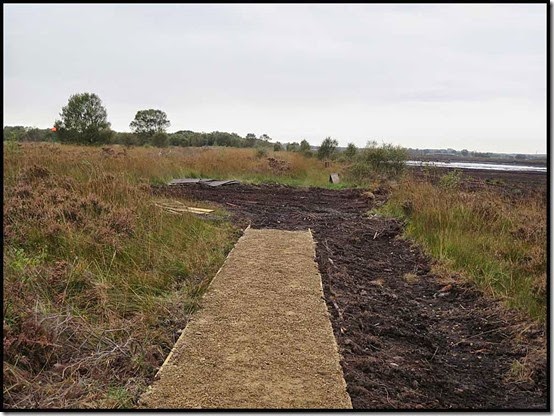 …continues around the perimeter of Little Woolden Moss: 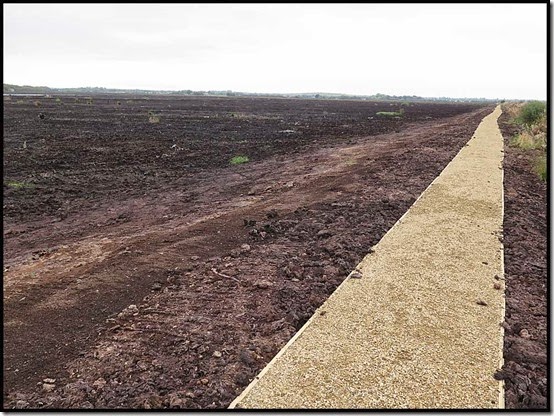 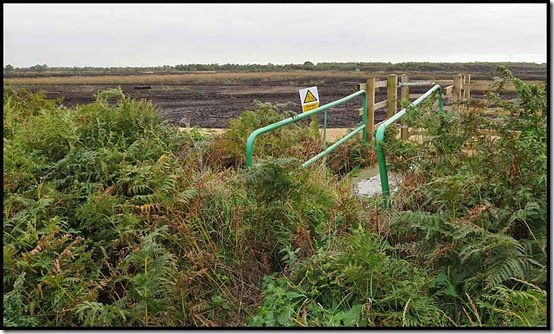 The ‘path’ continues across this field. Straight ahead: 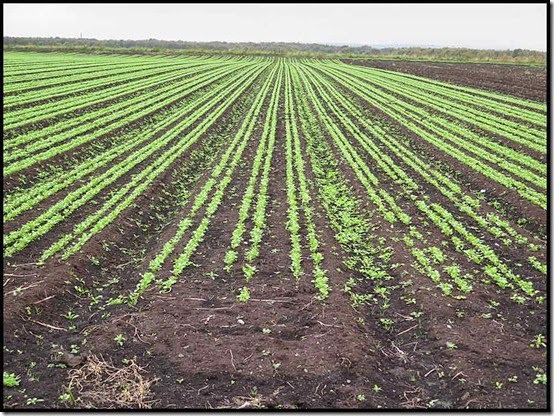 Reg and I chose a ‘non-path’ alternative: 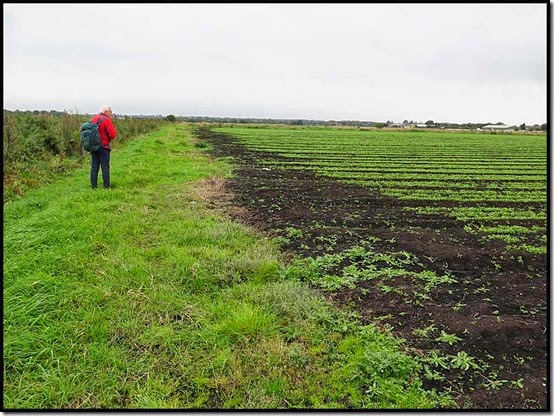 The plethora of tractors do show signs of aging due to heavy use: 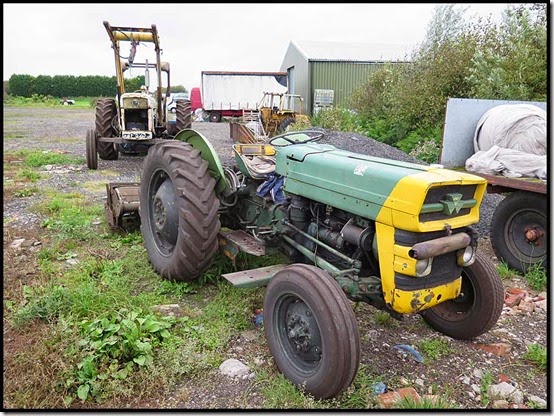 Radishes were being harvested: 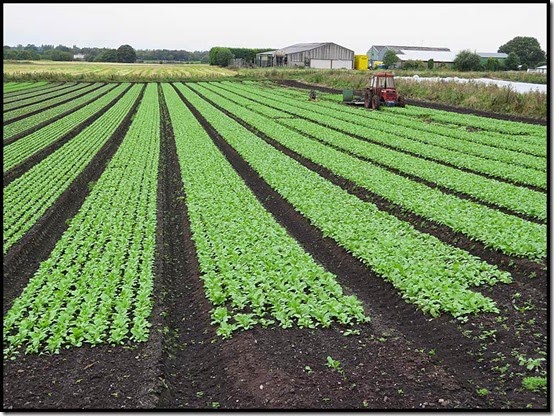 There was a very healthy looking crop under the hessian sheets: 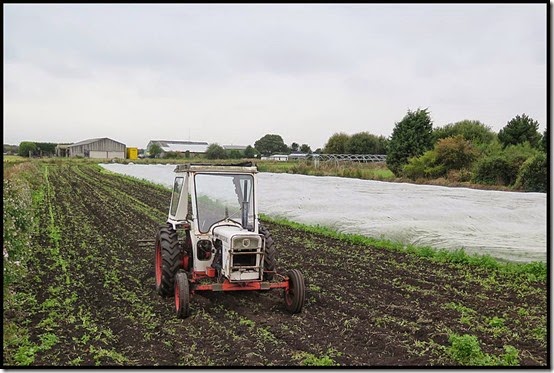 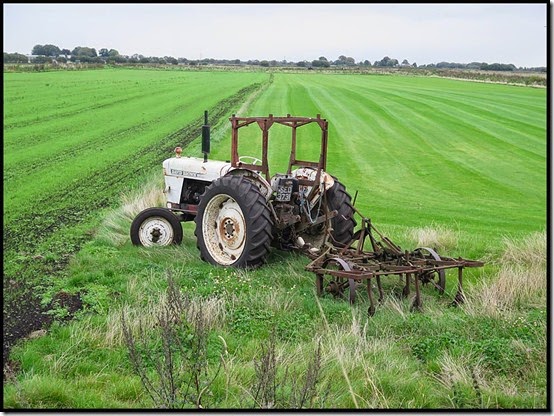 A ‘Bedford Plough’ has pride of place in this garden: 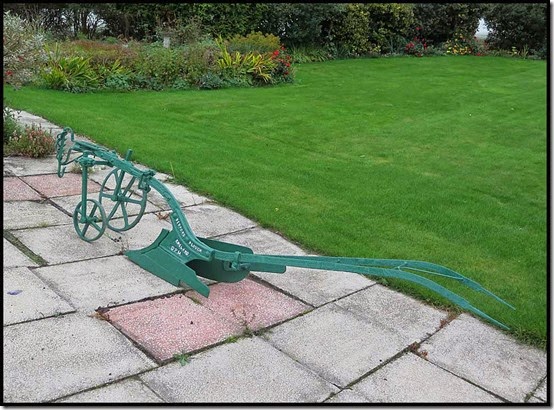 Nearby, dahlias were flowering strongly, if in need of some dead-heading: 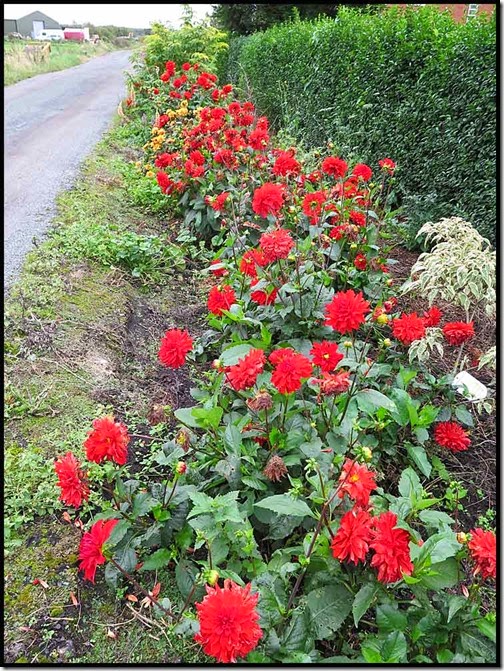 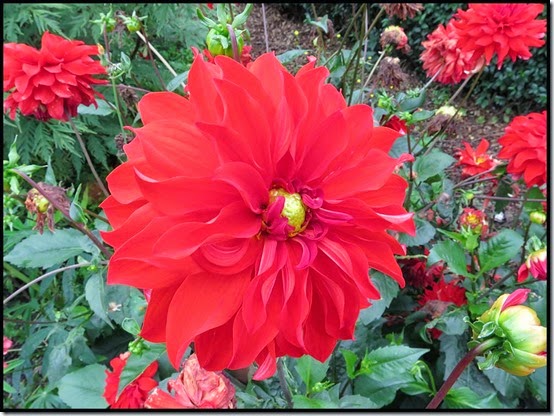 Turning alongside Glaze Brook, Holcroft Hall and its pond were passed on the other side of the brook: 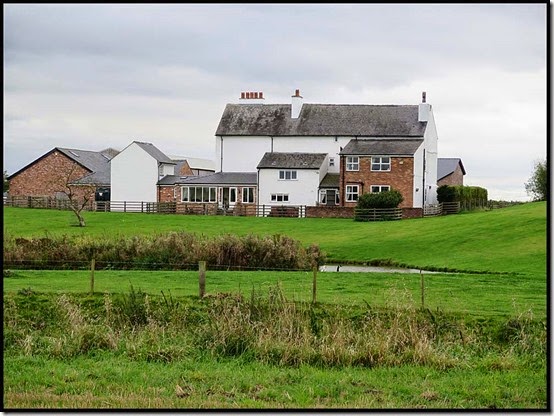 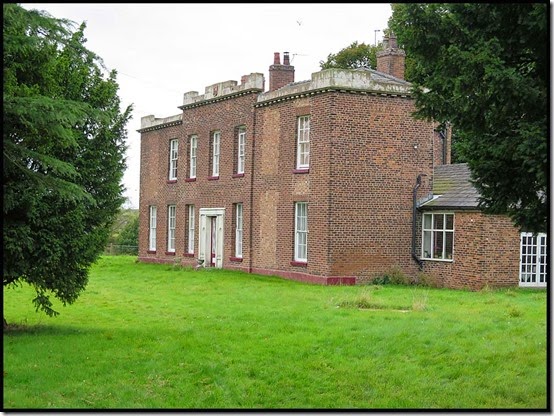 … as were fields of beet? 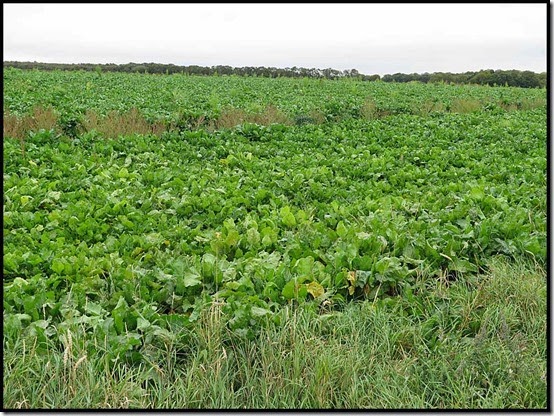 The Keepers Cottage is now a private house near the M62 motorway: 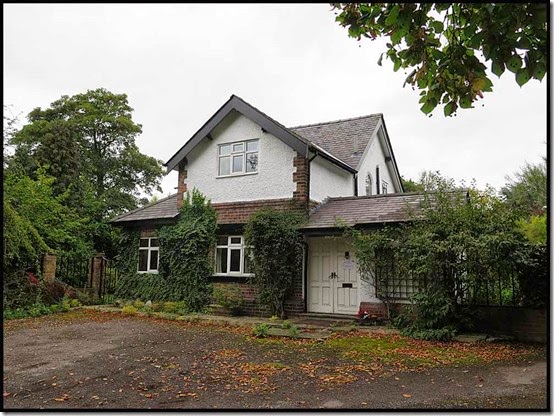 We found ourselves on a Timberland Trail, as you do around here: 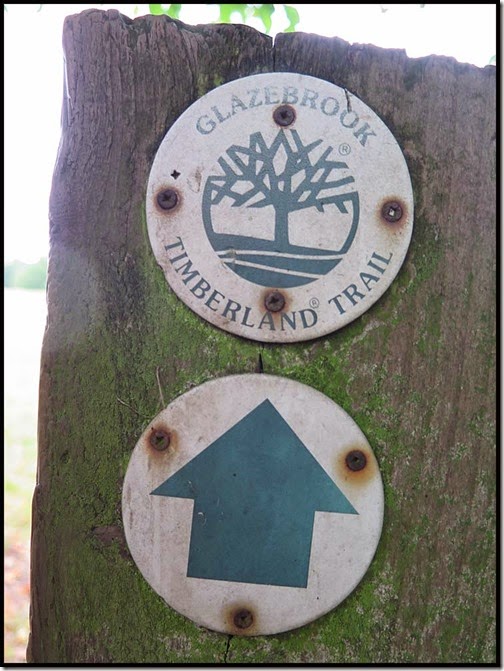 Despite the driest September ‘since records began’, we encountered a muddy enclave near the motorway: 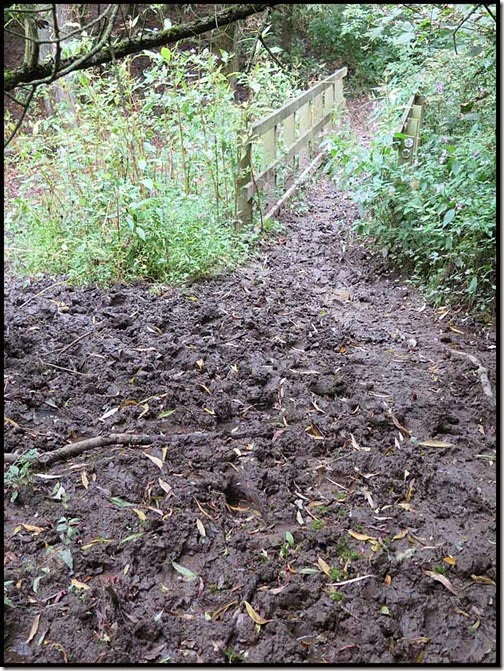 A heftier tractor comes within the budget of those at Great Woolden Hall, although the WW1 POWs who used to help out here have been allowed home: 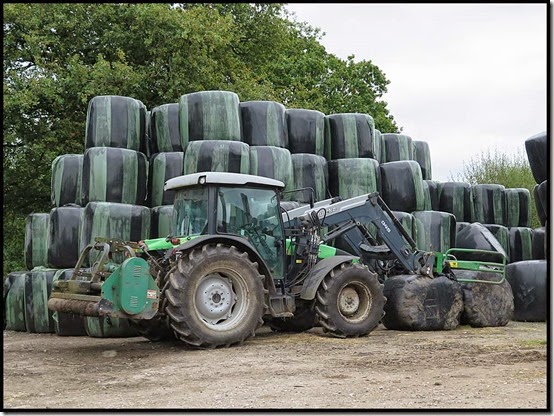 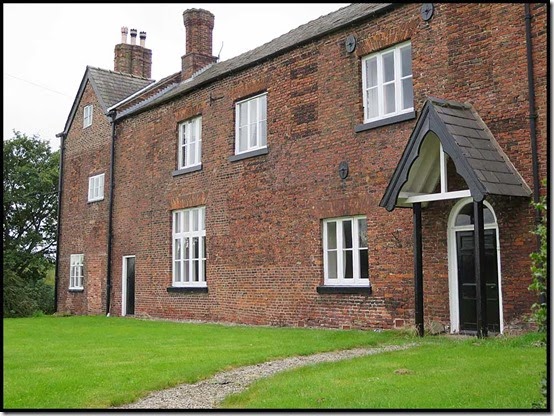 Salford has some pleasant countryside, such as this view from the front door of Great Woolden Hall: 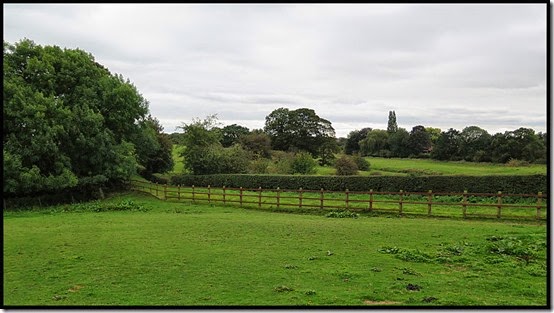 Then my camera was eaten. 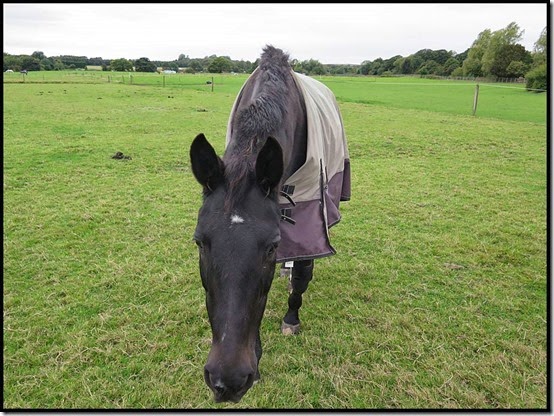 We adjourned to the Black Swan for lunch. Excellent it was as well. The goat's cheese salad with egg and beetroot was very tasty, served in an interesting/quirky/pretentious? wooden box.

Some great pics there M. That green and yellow one is an old MF 2135. You can tell this from its sister model the 2130 by the configuration of the front axle. The former having a cast axle and the 2130 had a fabricated axle.
You could get it in 3 or 4 cylinder versions and you don’t see too many of these around. It was originally all yellow and classed as an Industrial tractor, i don’t like the green. Its the same as the Red MF135 and Made in Banner Lane Coventry between 1964 and 1968 and not Barton Dock Road Manchester as most yellow MF tractors were post circa 1970.

Thanks Alan, I think I did tell you that this walk was 'tractor heaven'!

Yes i remember the area with fond memories of my youth. Potato picking and much more.