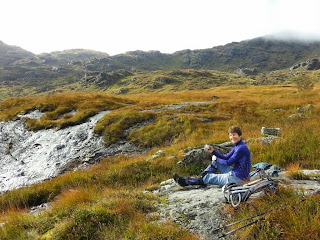 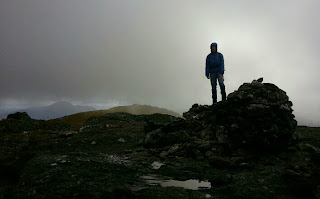 Happy birthday blog, by the way - seven years old last Wednesday. Doesn't time fly?
My previous ascent of Ben Vorlich was on 26 January 1985. We were camping at Ardlui and ascended from there in calm winter conditions, with a wonderful cloud inversion on the summit ridge. I'll try to dig out some photos and a diary entry when I get home.
Today's ascent with Sue was in similarly benign conditions though we encountered a couple of showers during the descent.
Parking in the lay by opposite Ardlui station, we braved the main road for a few hundred metres before diving under the second underpass and scooting up the hill. An unpleasantly steep and claggy stalkers track was soon reached, and the going was unexpectedly rough all the way up to the saddle at around 550 metres. Quite a contrast to the easy paths of Place Fell earlier in the week.
There were redeeming features. Sunshine (unexpected), pretty flowers that were still in season - bell heather, milkwort, scabious, tormentil, lady's mantle, yellow mountain saxifrage, bilberries, cotton grass, a white flower that may be bear berry, and a selection of buttercups. Dragonflies and bumble bees seemed happy in the heather.
The summit dived in and out of the cloud as we steadily gained height, but we never actually entered the cloud. The path from the saddle to the summit, more a sort of sheep track, was excellent, with one or two steep rock bands thrown in. Big chunks of quartz gleamed in the sunlight, but the cool breeze drew an extra layer of clothing. Boats moved purposefully across Loch Lomond far below.
We reached the summit after three hours. There were six other people up there, the rest having come up from Inveruglas. We later met four folk ascending from the direction of Ardlui. The views from the summit were superb, with Ben Lomond lurking to the left of the loch.
Lunch was taken in a sheltered spot just below the summit, then we retraced our steps as best we could, admiring the views that had earlier been at our backs; now they were framed by rainbows.
A quick dash to the car just about avoided a third shower, then we returned to the Crianlarich Hotel in plenty of time for a sociable afternoon and evening with our TGO Challenge friends.
Today's walk was a mere 12 km with 1000 metres ascent, in a leisurely five and a half hours.
The pictures show Sue at our elevenses break, with Ben Vorlich in cloud to the right, and Sue on the north summit with Ben Lomond in the distance.
Posted by Phreerunner at 17:35

I remember being up there with a good Munroing friend with snow and glorious weather. It had been a perfect but long day but even so I was pleasantly tired and thinking of return to the comforts of the glen, but my ever enthusiastic friend has never had enough, " it's great isn't it? You just don't want to go down do you?"

Given the poor weather forecast, it was an unexpectedly good day out, Conrad.