Tatton Yule Yomp and a Parkrun 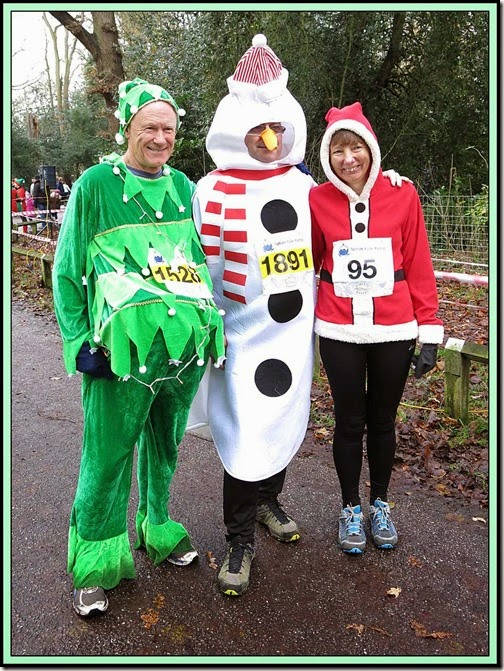 Two runs dominated the weekend’s attempts to get some exercise.

First, the weekly Parkrun at Wythenshawe, where we assembled on Saturday morning rather chillily but in bright sunshine. Here’s Richard with his team. 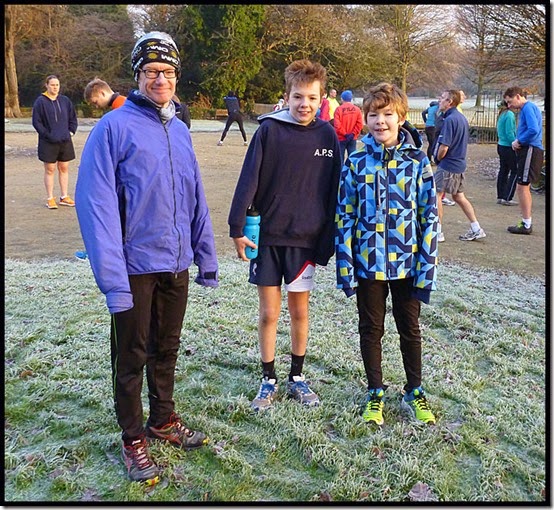 After singing Happy Birthday to eighty year old John Dawson, the runners set off after Andy Holloway, pictured in red on the right-hand side, had asserted “this is not a race”. 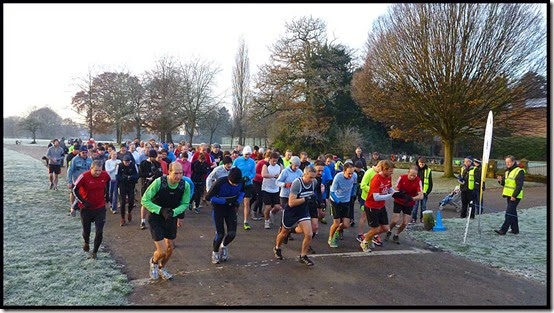 Poor Paul Barber found himself all alone near the finish. A creditable tenth in the “not a race” that had been led home by Mr Holloway in a shade under 19 minutes, Paul just failed to lap yours truly, who came in at the back of the field in a little over 42 minutes. 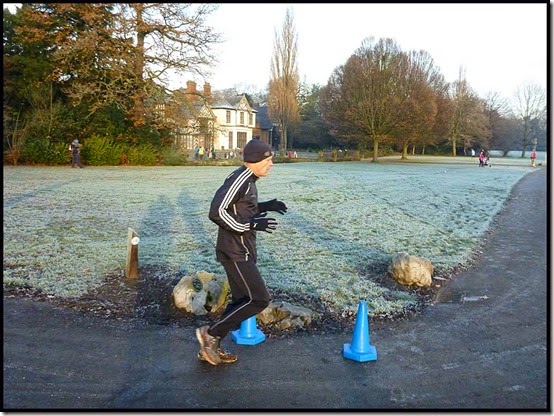 The 42 minute 5 km Parkrun (well – ‘Parkfastwalk’) had been my first attempt at ‘running’ for five weeks due to a poorly knee, but that would have to do as ‘training’ for the Tatton Yule Yomp as I was doing that 10 km race for charity.

We spent a few minutes with Colin and Helen, with whom I’m pictured above, then we observed a large group of folk emerge from a mobile bar (aka a Haytons Executive Bus). The Prosecco fuelled group then morphed into the ‘Twelve Days of Christmas’. 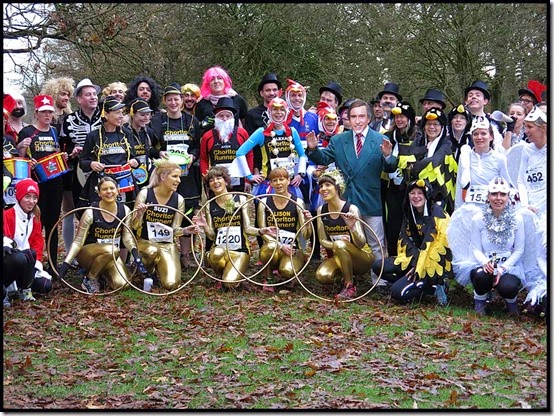 Others set off with objectives to win… 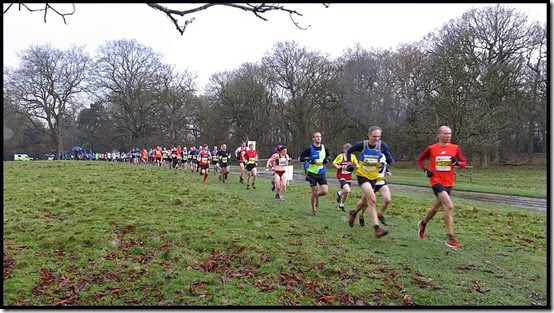 … or merely to get round the muddy course. 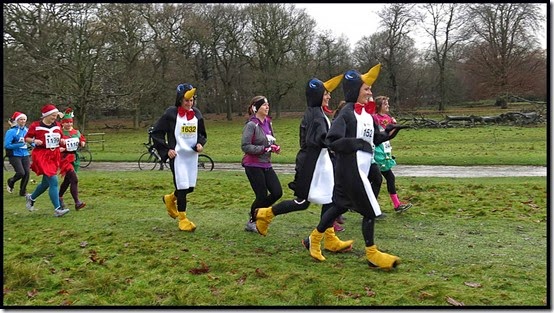 “What’s going on, boys – better get out of here before they rope us in!” 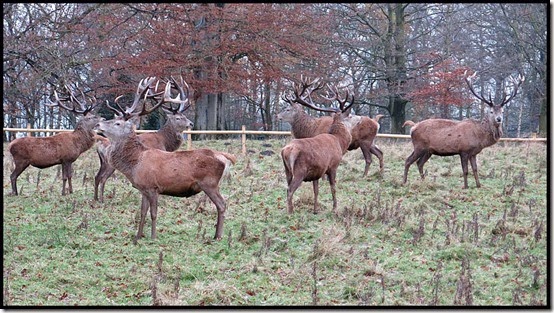 Sue, who took these pictures, didn’t venture into the mud that occupied four fifths of the course. It had started raining half way through the above video, and it continued to do so. My costume was very wet and clingy, with the foliage gradually assuming the hue of a tree trunk; the frilly bits kept getting stuck to the smooth soles of my feet, which made the sections up and down muddy slopes and over tree roots quite interesting.

I was encouraged on by Alastair, who like me is injured. By the time we reached the point shown below we were wet and cold but my knee and Alastair’s foot seemed by some miracle to have stood up to the punishment. 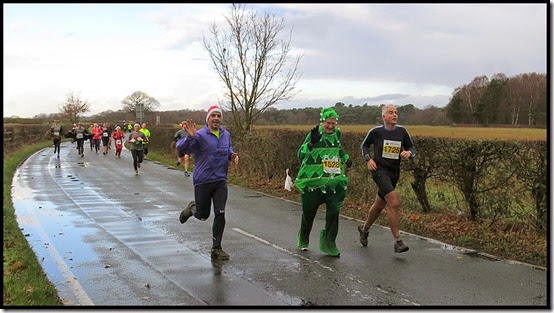 So we continued on, to finish in 56 minutes 35 seconds, about 400th out of nearly 1100 starters. Thanks really do go to Alastair for keeping us going at a fair pace under the circumstances. I’m told I was the first tree to finish, and I had successfully avoided all the baying dogs with their bladders poised for discharge. My lights were still working – something of a surprise, that. 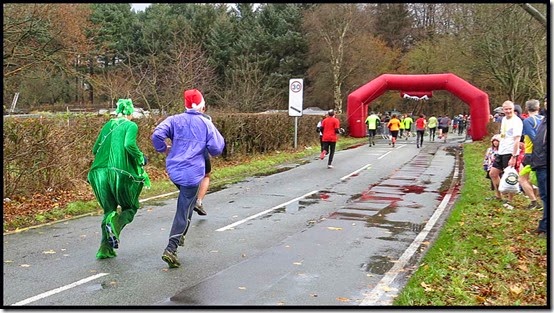 The penguins came in a few minutes later. 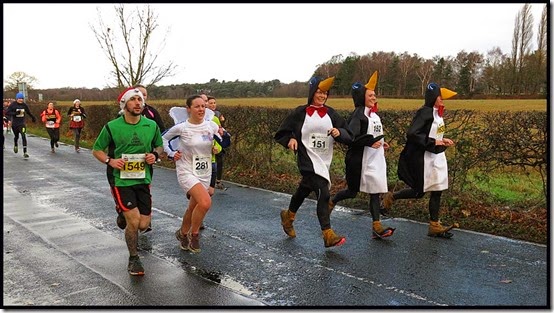 Even the snowman made it without completely melting, though his soggy nose was rather droopy. 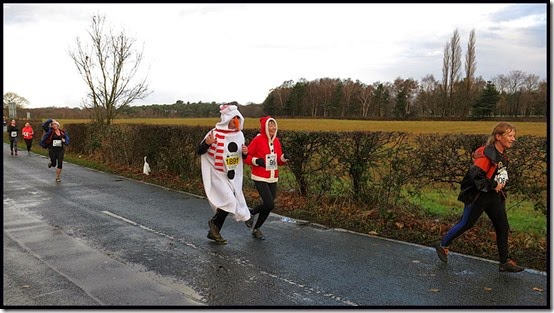 Great fun was had by all (I think), and thanks to the car’s heater on the way home we just about managed to avoid hypothermia (it was close, though).

Here’s the route, should anyone wish to go round it and explore the mud. There’s a slideshow here, and the Wythenshawe photos have been posted to their Flickr site, or is it here, and if you haven’t supported my charity and would like to contribute (I’m still trying to reach a £400 target) my JustGiving page is here.

Thanks, you two. And the good news is that the bad knee is still looking good enough for some cross country skiing in your part of the world in January.
M

Oh its a tree! I thought it was an elf.

Dont trees have a fairy on top?

I have to say that despite the lights, a 'pregnant elf' diagnosis has been suggested.

A fairy may well appear to accompany the lights.