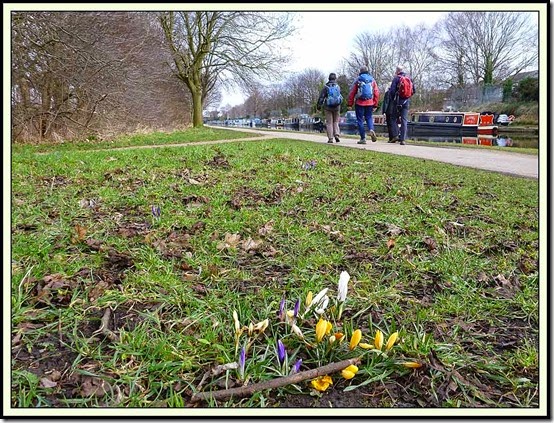 I joined JJ and Rick on this ‘Curry Walk’, expecting to find just them and a straightforward stroll along the towpath into town. I was wrong. Firstly, Judith – TGO Challenger and Naval Reservist – was there, having left home on the Wirral at around 7 am to get to our rendezvous point (a minute’s walk from our house) by 10 am. JJ had also put details of the walk on a ‘Meetup’ website, and this attracted Lynn, from Altrincham, for her first walk with this somewhat random and I hope not too cliquish group.

Anyway, you can see from the first two images that it was a tolerably pleasant day, if a bit cool and breezy, and the first of the crocuses were attempting to sprout from the towpath verge in Sale.

You can see the Watch House Cruising Club’s HQ in the distance in the above picture, taken shortly after crossing under the M60 motorway and over the River Mersey. Affixed to the Cruising Club building is the following sign that presumably refers to Cut Hole Bridge, over which the canal crosses Hawthorn Road, which leads to Stretford Cemetery. The sign is a bit of a puzzle as there’s not really room for a ‘Heavy Motor Car’ on Cut Hole Bridge. 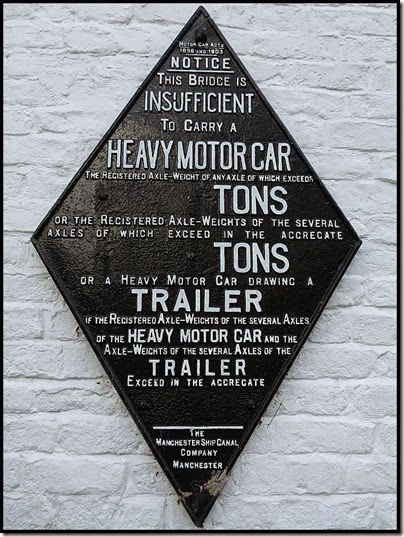 I wasn’t expecting to go down Hawthorn Road. But Rick’s route took us that way. I’m very familiar with these parts, having used Hawthorn Road as a jogging route for a number of years when I lived in Chorlton. It’s also part of the Trans Pennine Trail along which I still frequently cycle.

So I enjoyed the stroll into Chorlton, which can be accomplished by way of numerous different routes. Our route brought us out by the (smartened since I lived nearby) Horse and Jockey pub on Chorlton Green. “Let’s go and look at the church” enthused Rick. “Ok” we agreed, but ‘strange’, I thought – I didn’t remember there being a church, just a collection of grave stones laid where a church had once stood. And that’s what we found.

Wikipedia has quite an extensive entry on Chorlton, including reference to it being in ‘M21’ – the most burgled postcode in the UK in 2014, with 45.2 claims per 1000 of population. I didn’t until today know that cars were manufactured here in the 1920s – Ashby cars appear however to have had a short lifespan.

Regarding ‘The Church’ that Rick was seeking, it appears that ‘A timber-framed chapel dedicated to St Clement provided by the Barlow family in 1512 was used until 1779 when it was replaced by a brick chapel, probably on the same site. Its Grade II listed gatehouse and bell turret remain at Chorlton Green.’ Indeed they do.

Our walk became urban as it progressed along trendy Beech Road (refreshments available) to turn right onto Barlow Moor Road then left into Chorlton Park, following a path on the south side of Chorlton Brook. Rick’s intention had been to follow this path all the way to join the disused railway ‘Loop Line’ near the end of Egerton Road South. But whilst the Metrolink tram line to Manchester Airport is open to trams, pedestrians must wait for landscaping to be finished and paths to be reopened – our way was blocked at Nell Lane. We reluctantly decided not to jump the fence, which was probably just as well as we would have come out at the point shown below, even if we hadn’t been stopped by workmen with heavy machinery. 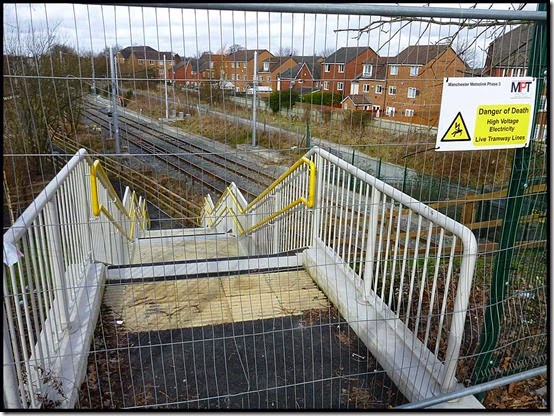 Chorlton Brook flows into the River Mersey near where we had been walking along Hawthorn Lane, so we’d been following it for some way. After a pleasant section along the disused railway ‘Loop Line’ – including the sight of PC Plod chasing an errant motor cyclist on his bicycle – we crossed another brook shortly before entering Platt Fields Park. I’d assumed this was Chorlton Brook again, but it appears from the map to be Platt Brook. Perhaps this and other nearby ‘brooks’ flow via a system of culverts into Chorlton Brook and the Mersey. Ornate railings date the infrastructure to a time when ‘things were done properly’. 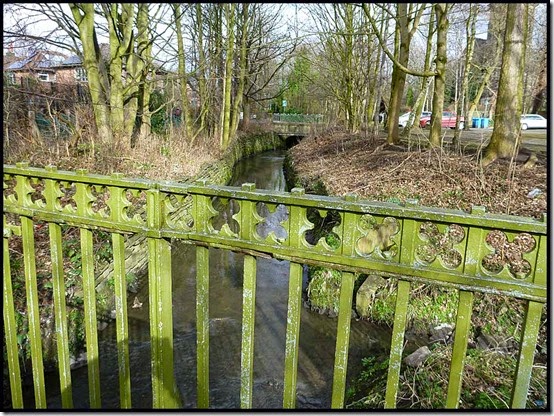 This lovely avenue of mature trees drew us towards Platt Fields Park and the start of a lengthy ramble through various types of student accommodation. 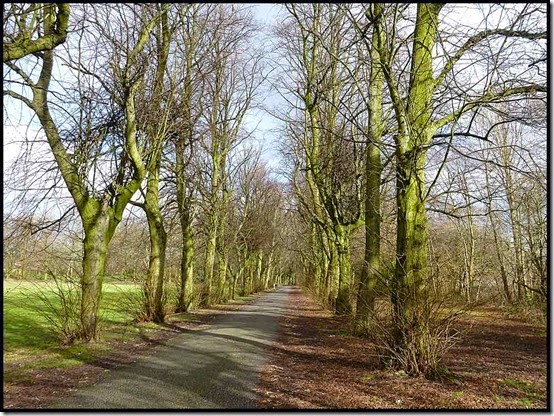 I recall entertaining games of Crown Green Bowls in Birchfields Park, as a student of the 1960s, and strolling along Conyngham Road, we passed St Anselm’s Hall, my first ‘home’ in Manchester, as a student in September 1967. The halls of residence appear to have been well maintained on the whole, though one near the main University buildings was decrepit and empty. But not as decrepit as some of the former student accommodation in parts of Whalley Range; fine old houses left almost derelict through lack of maintenance. 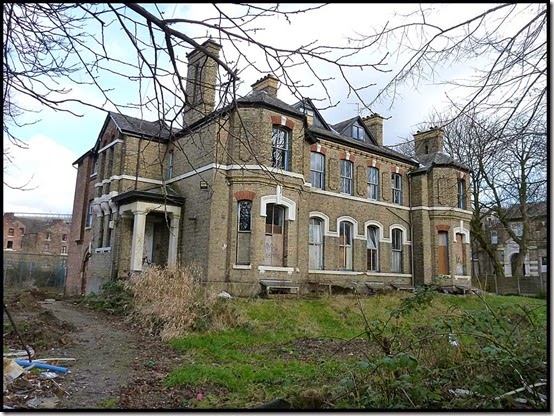 The large rooms in those buildings made for superb bed-sits or shared houses for students and ‘young professionals’. It’s a great shame to see them in such a mess. On the other hand, The Anchor Coffee House looks quite smart, but JJ and I were equally distressed – this used to be ‘The Whitty’ (Whitworth) where many a boozy gathering was enjoyed. I wonder where students now spend their Friday nights? Surely not in Coffee Houses? 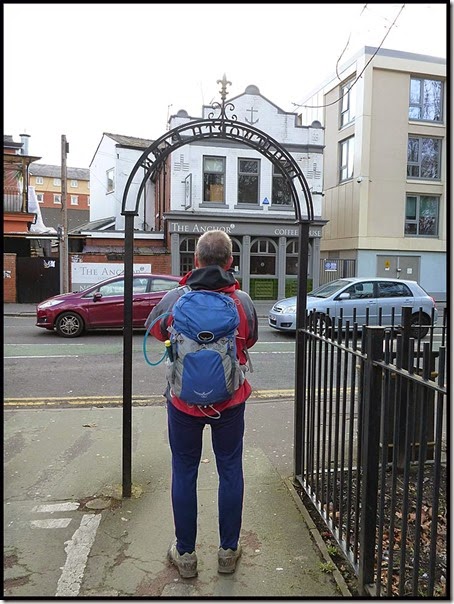 We continued through Whitworth Park. It hasn’t changed much since the ‘60s, but as we passed through Manchester University’s campus, at one point entering a building through the front door and exiting via the back door as Lynn proudly showed us a short cut, we could see massive changes since the days of the 1960s student. But that’s one side-track too many to describe in this entry.

Before reaching the part of the campus that used to be UMIST (University of Manchester Institute of Science and Technology) we passed under the inner city ring road known as the “highway in the sky”, the Mancunian Way, opened in 1967 by Harold Wilson shortly before I arrived as a student. The plaque indicates that it won an award in 1968, but now the whole structure looks pretty tatty. 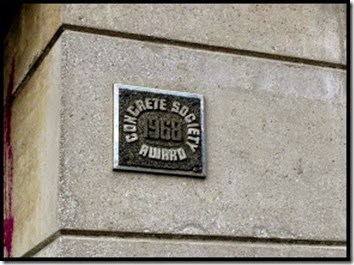 The Barnes Wallis Building – UMIST’s Students Union building – was shut for some sort of building work. Refurbishment? – it was new in the 1960s. Where do the students go now?

After passing under the railway line, across which I used to enjoy watching steam trains puff when I was a student, we emerged in front of UMIST’s main building that towers above Granby Row, with a rope sculpture in the foreground. I have happy memories of the main building. It was one of those places, like hospitals and schools, where it’s nice to know your way around but scary if you don’t. 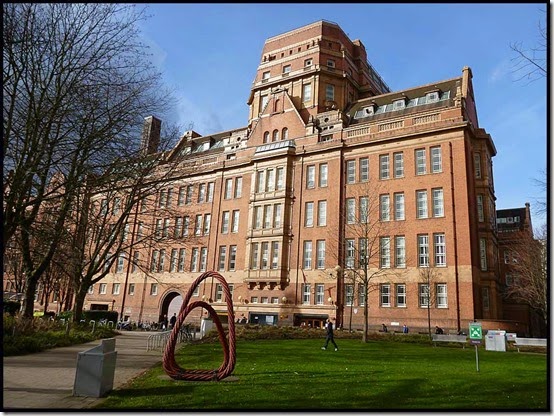 We hastened on through town to reach This and That by 2 pm. Lynn had to leave for an appointment (see you next time, Lynn) but the rest of us stayed to enjoy a curry…. 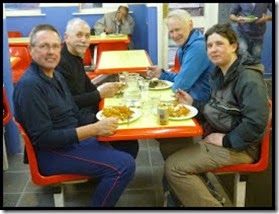 …washed down with a beer at a pub around the corner suggested by Alan R, who sadly couldn’t join us today. 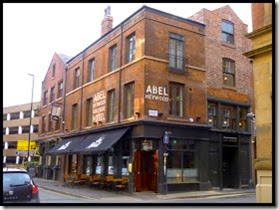 Thanks to JJ for allowing use of the three smaller images above.

Here’s an image that might blow up a bit if you click on it, showing our route from Timperley – one of many ‘green’ routes into Manchester, this one being about 20 km in length and taking around 4 hours. 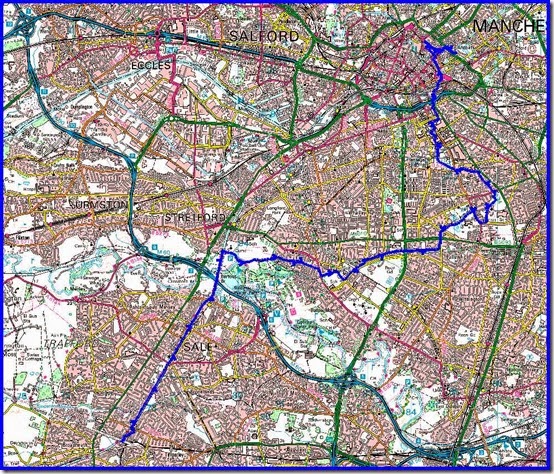 Thanks to Rick for providing the route, and to everyone for providing a bit of jollity on this cool February day, on which Judith found one of her ratings at Market Street Metro Station – he amused everyone by addressing her as ‘Ma’am’.

A nice change from the usual canal route. I bet you were all starving after 4 hours thinking about the curry.
Glad you enjoyed the pub and its a shame I missed the day.

Yes, we were a bit peckish! Sorry you couldn't make it.