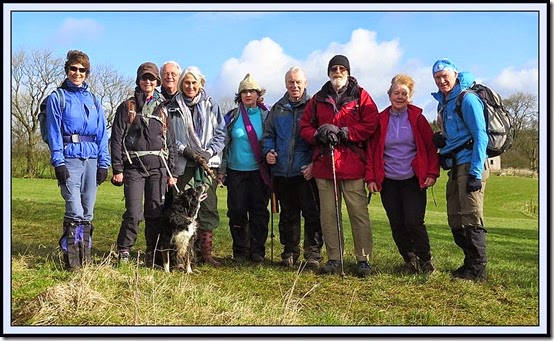 It’s always a pleasure to meet up with our friends from Johannesburg Hiking Club, especially as they generally let me choose my own route for their walks. Today I was aware that a few of the rapidly aging population were struggling with ailments, so a short circuit was in order.

They were staying at Shayside, to the west of Warslow, from where we set off at around 10am along the track to Villa Farm. Pictured above is the full team: Sue, Gill, Kevin (bad knee), Millie, Anita, Sue (bad shoulder), David (bad knee), Colin (bad knees), Gaynor’s shadow (asleep after a hard night), me.

From Villa Farm, on the outskirts of Warslow, we headed along the bridleway towards Grindon. It was undulating. 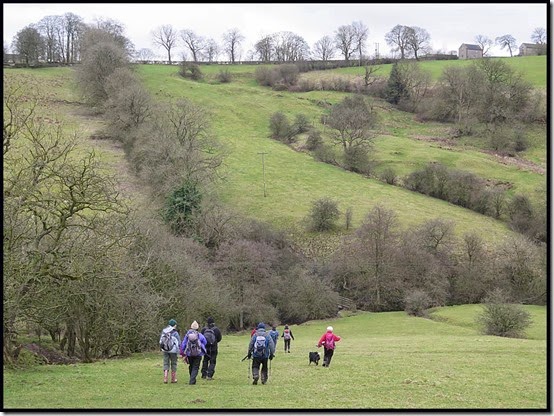 And muddy in places. Sue E in particular enjoyed gathering as much mud as she could, for later distribution on the floors of Shayside.

We turned left at Hoo Brook and headed to the cafe at Wettonmill, where David brought a round of drinks (I think) - it was his birthday. By now, Kevin’s knee was whinging to the extent that he decided to retreat to Shayside along the tarmac provided. The cycle track that used to be the Manifold Valley railway line led to a good view of Thor's Cave, high above the valley. 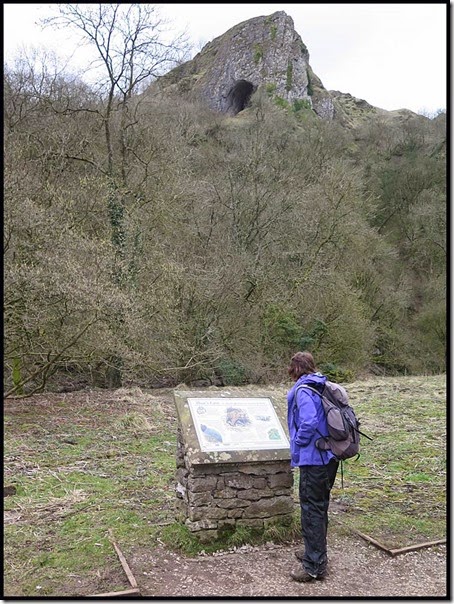 The cave is along the path to the left in the image below. Everyone had been there before, so we continued up to the village of Wetton, Millie assiduously carrying her lunch. 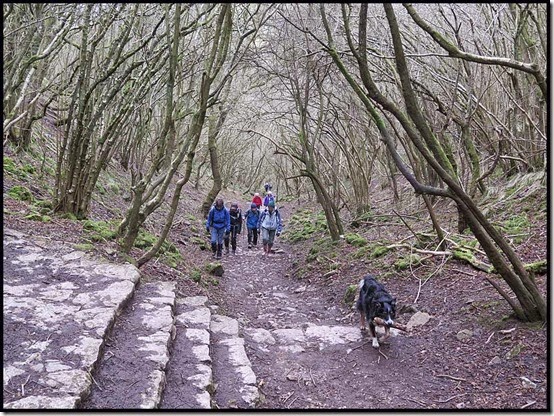 Here's the view from Wetton, across the Manifold Valley to Grindon. It was becoming steadily cloudier, following earlier bursts of sunshine on a cool day. 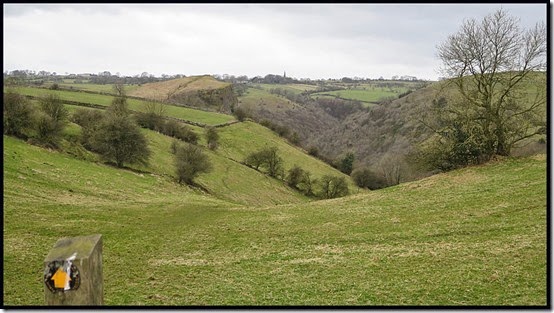 Anita and Millie posed on a block of stone in Wetton that may once have been used to mount horses. 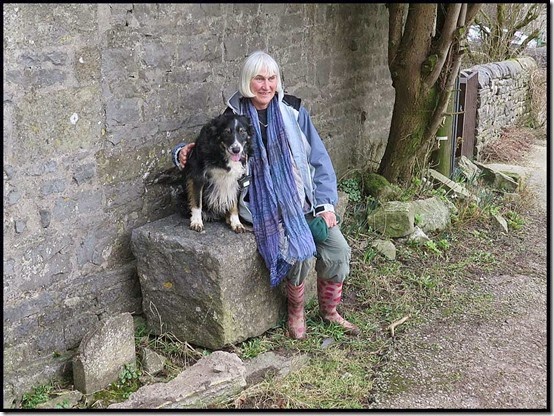 Lunch was taken beyond the Wetton hills at a sheltered spot near Back of Ecton. 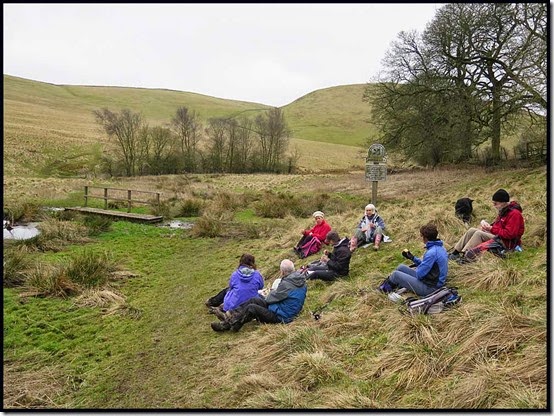 Continuing up towards Ecton Hill, past a small reservoir, we came across some very docile 'British White' cattle, completely unfazed by Millie’s benign presence. 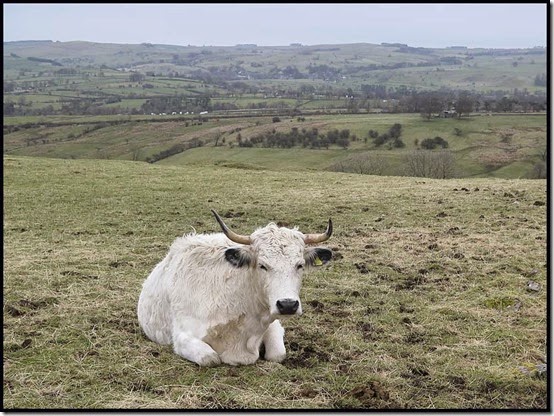 Ecton Hill, 369 metres, provided good, if deteriorating, views from the high point of the walk. 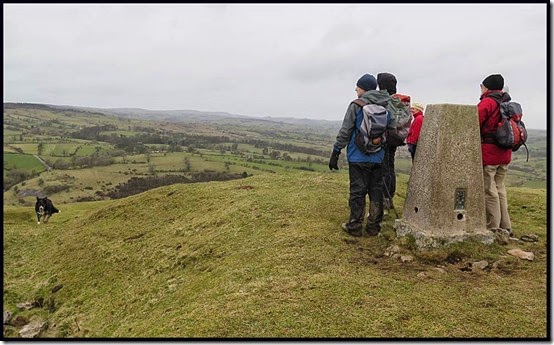 We descended north to the site of a copper mine. This was a state of the art facility in its day over 200 years ago. Copper was being mined here as long as 4000 years ago, but production peaked between 1760 and 1789, when 400 local workers produced 42,000 tons of ore that was transported by pack horse to a smelter eleven miles away. The copper was used for making brass and for lining the bottoms of naval ships to make them sail faster. 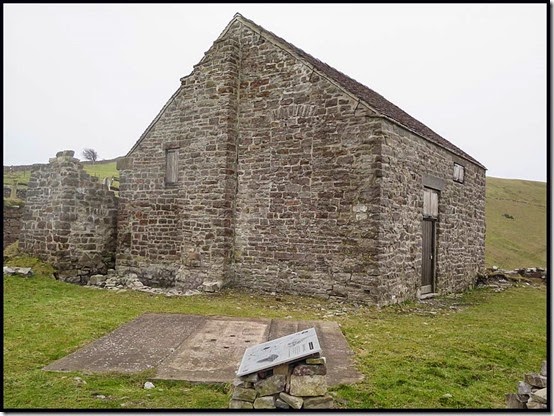 The mine finally closed in 1889. Today the hill was fringed with camouflaged men armed with rifles, so we tiptoed softly away as it started to rain.

By the time we reached the distinctive copper turreted building that dominates Ecton it was raining quite hard and everyone seemed thankful that a short itinerary had been chosen. 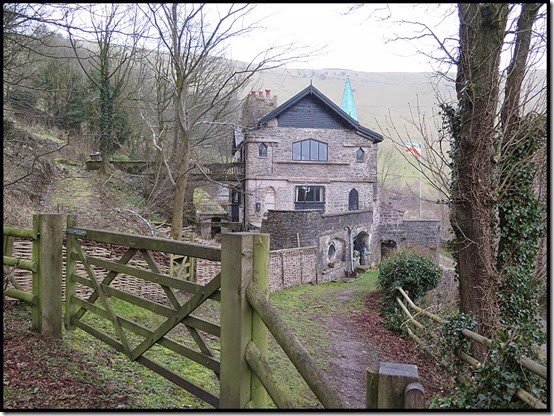 By 2.30 we were back at Shayside, after a wet and muddy, but nevertheless enjoyable, conclusion to the walk. 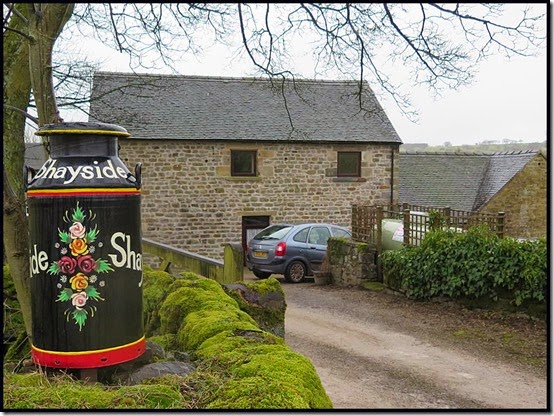 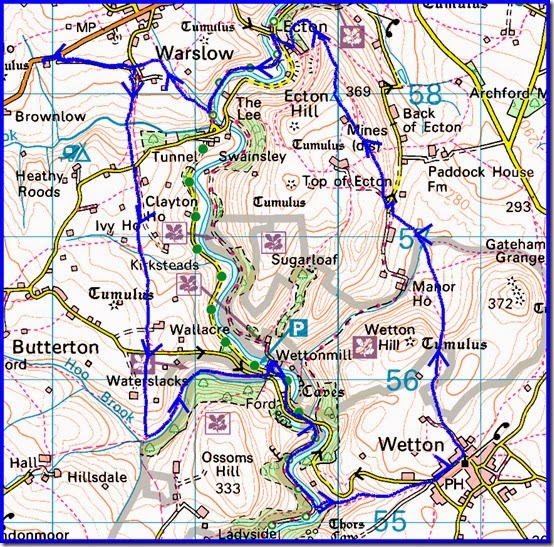 It was good to see everyone after a longish period, and to enjoy David’s birthday tea and cake selection – all very nice cakes that sent Gaynor to sleep, I didn’t need much supper – and Andrew (even more crocked than those on the walk) even got a whiff of cake from afar and put in an appearance. We hope your knee problem resolves itself, Andrew. And we hope the ham in coco-cola went down well!