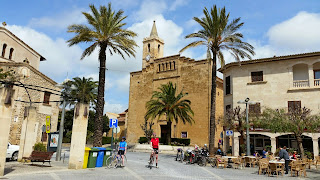 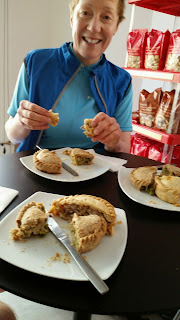 Sue went up sa Talaia Fred and Puig de sa Creu today in lovely weather. Her report will follow in due course.
Meanwhile, I went to Bruce's bike shop, supposedly to pick up a hybrid bike for a few days. I came away with Ambrosio, who has the thinnest tyres I've ever ridden on. Lyn and Robert have their own bikes, so we loaded all three into Jumpy the van and set off to Ariany.
There followed a 68 km bimble on the following route:
Ariany > Petra > Ma3330 > Bosch Valley > Sant Llorenç des Cardassar > Ma4022 > Ma4021 > Manacor > beside Ma15 > Ma3310 > Petra > Ariany.
It took 3 and a half hours moving time but about 5 and a half hours in total, reflecting the leisurely nature of the day.
There are lots of cyclists here, so riding on tarmac is much less stressful than in the UK, as drivers are more considerate.
Hawks hovered over a plethora of smaller birds, and regiments of telegraph pole trees sprouting pink flowers puzzled us as to their identity.
The pie shop in Sant Llorenç proved an excellent lunch venue, though the small town (pictured) proved less than easy to leave - we spent 8 km searching for our planned exit. My walks may include unexpected meanders; Robert's bike rides certainly include unrehearsed 'rambles'!
The evening was spent in a nice restaurant in Pollença, before we adjourned to watch a long Easter procession that seemed to me to feature numerous chapters of Klu Klux Klan, followed by Christ (a dwarf) on a byre, and a brass band. All slowly marching down Pollença's 400 Calvari steps over a period of 45 minutes.
Some photos were taken - I'll try to provide a better commentary in due course with the slide show. It was actually an important event, attended by thousands and with Balearic TV broadcasting live. So we may have been on local TV tonight, especially 6 ft 8 inch Robert.
Posted by Phreerunner at 22:43

68k sat in a saddle doesn't bear thinking about.

Not too bad actually, but I went for a walk today...