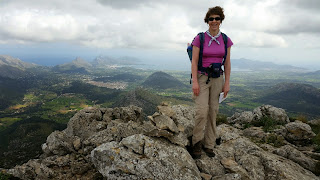 On another 'partly sunny' day I decided to give myself a rest from a rather firm saddle and join Sue for a 'hill day'.
This was walk 19 in Paddy Dillon's Cicerone guide, but we aren't convinced that he's done the whole walk.
Almonds and orange trees accompanied us on the track out of Pollença, from where the paths gradually diminished in width and ease of surface, finishing on a stone path that had clearly once been a good old mule track to the high farmhouse of Fartàritx Gran.
The local variety of cyclamen, with small white flowers, grows in this vicinity, but the rich crop of orchids that Sue found yesterday wasn't in evidence here - just a few interesting lilies to be identified when we return home.
There was cloud on our summit for a while, but it soon left in favour of the much higher top of Puig Tomir (1104 metres).
The section from Fartàritx Gran to the summit was the bit that Paddy may not have walked. His route description sent us to the right of the waymarked path. There's a spring above the farm at the edge of a wood, where we thought we were supposed to contour a little further. But the path now seems to ascend up above the farmhouse, rather than to its right. Anyway we climbed up to an imposing rock face and contoured left on animal tracks over rough ground, eventually reaching the waymarked path that led in easy zigzags through a rock band to the summit plateau. From there it was an easy 400 metre stroll to the summit cairn.
There were fine views in all directions, as intimated by today's picture. These, together with the arrival of a Scottish pair, resulted in an hour's sojourn at this scenic spot. Goats frolicked nearby as we chatted.
Eventually it was time to descend back to the rock band, after the descent of which we turned right and continued down to L'Assarell farm, from where a surfaced lane led past assorted species of lily back to Pollença. A bit tedious, this last bit, but apart from that, an excellent 18 km walk taking six and a half hours, including an hour for lunch and socialising on the summit with the only people we met all day outside Pollença. Back in town, ice creams were welcomed before we said goodbye to the goldfinch on guard at the car park - he had done a good job - the Panda still appears to be free from damage!
Posted by Phreerunner at 20:22