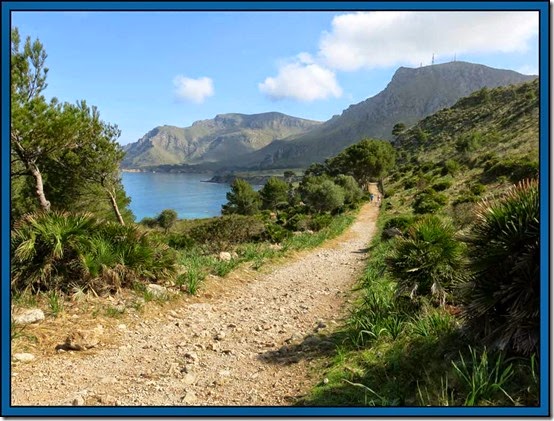 This is an entry from Sue. I’ve spent hours trying to post it from Nallo Lady, but have only succeeded in deleting her from the list of authors and I’ve been unable to re-invite her, so it looks as if her postings will have to be in my name for the time being…

A somewhat belated report on my walk but stimulated by a wish to share a stunning day in the hills of Majorca.  With Martin cycling with Robert and Lyn, I was free to select a grade A+ walk (defined in the guide book as a “strenuous walk, often pathless in places and on rough ground, with considerable route finding and/or some scrambling.  Normally only for experienced walkers. A+ and A++ are particularly difficult”).

After an hour’s journey dodging the multitudes of cyclists, I left the Panda at the Cases de Betlem parking area north of Arta to start the 10km circuit. I didn’t get far (perhaps just 200m!) before being distracted by orchids which I hadn’t seen before on the verges. Finally I was able to motor along the track pictured above until a right turn saw me climbing the hill. 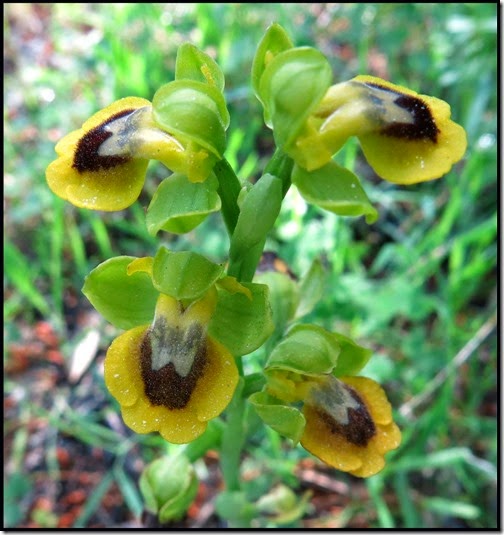 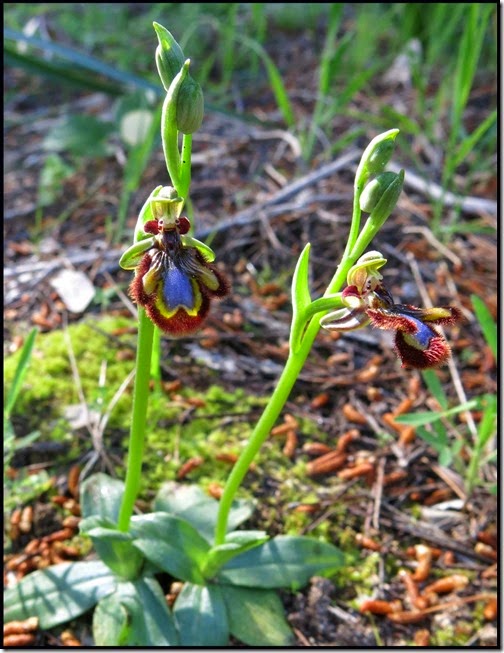 Where the path ended, the scent of hay rose from the cropped grass and a small stream meandered down, fed by a spring and lined with Palm fans. 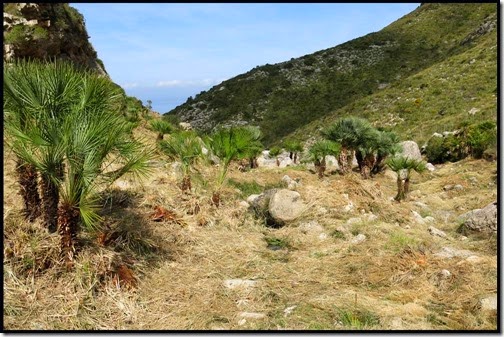 Here, the tap water was emptied out of my bottle to be replaced with spring water. The hill was covered in bright yellow gorse, in low, round clumps, and white-flowering asphodel. Small cairns led the way upwards, partly using a dry stream bed. It was rough and covered in vegetation – long trousers were definitely needed, despite the warmth. Higher up, the line up the cliffs wasn’t clear, but was confirmed by a cross, i.e. Not this way! My route was perhaps not the easiest I could have chosen, but a thrutch up the rock brought me out at a col at 330m, with Puig de sa Tudossa and its prominent masts to the left. As I climbed, seagulls squawked noisily above and I wondered if they were nesting in the cliffs. With the main difficulties over, I had a pathless but straightforward walk along the escarpment edge, with views across Alcudia bay. 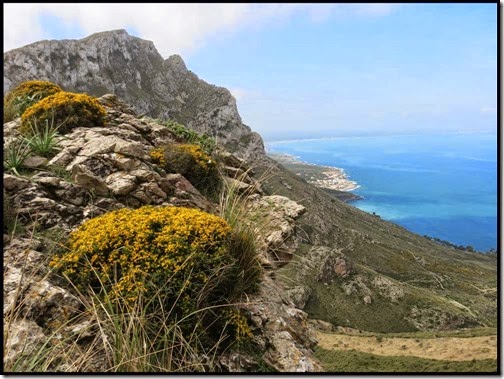 Just before the trig point of sa Talaia Freda, 564m, more new orchids, just 3 inches high or so.  This species is still to be identified! 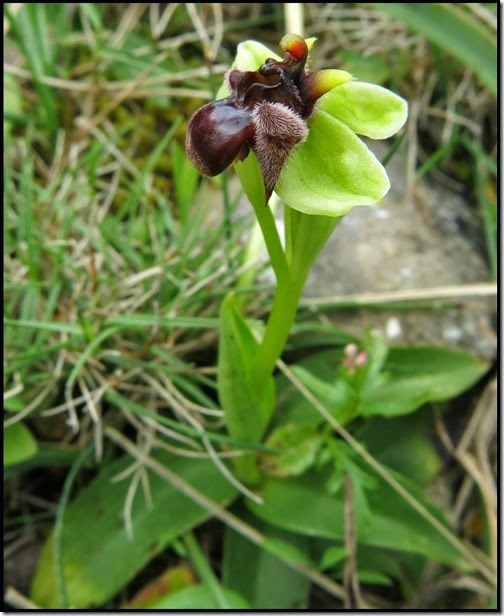 As I lunched at the trig point, a yellow swallowtail butterfly flitted around the summit rocks for a few minutes before flying off like a small bird, and a kite, with it's forked tail, also flew overhead. The view was fairly hazy to the south.
Just as a Spanish family arrived, I left the top, to descend steeply to reach some pinnacles and gain another small summit, with a cross and good views down to Betlem and the Alcudia bay. A wide stony path led down, and I was now meeting several groups of people.

The path brought me out at the font near Ermita de Betlem, where I watched a group of locals filling large containers from the spring. Just beyond here was a stand of bee orchids, quite overlooked by those passing by. The Ermita was peaceful, with white walls but a lovely painted ceiling, and a grotto with stalactites hanging from the limestone above behind the alter held the nativity scene. 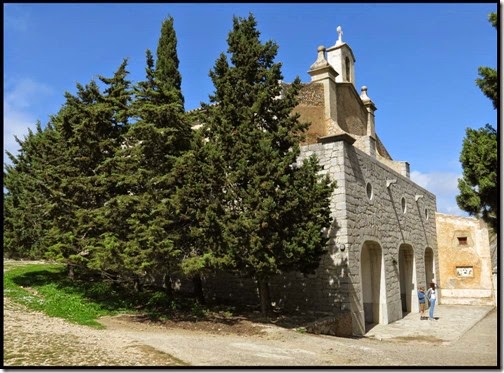 Another 45 minutes or so downhill brought me back to the start where the car thermometer read 22C.

After an evening meal in the main square in Pollenca, we joined hundreds of spectators lining the 365 Calvari steps, for a torchlit procession in which the body of Jesus is brought down. A slow rhythm was beaten by drums which gave it solemnity. 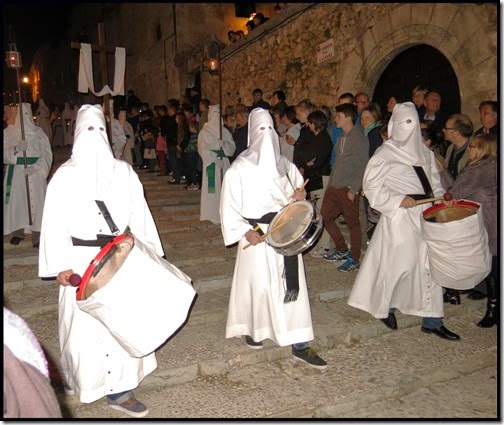 The hush during the procession was palpable. Both adults and children participate, dressed in robes, a different colour for each church taking part. It starts around 9pm and takes about one and a half hours for all the participants to file down the steps.

Sorry about the various test postings, but I've finally been able to reinstate Sue as a contributor in the name of Nallo Lady, and I've got her Windows Live Writer account working again.

Something of a miracle. Blogger and Microsoft support were no help - it needed several hours of perseverance. I really wouldn't want to repeat the process.